The UK economy contracted 2.0% in the first quarter of 2020 as business activity and spending were disrupted by measures taken to contain the COVID-19 outbreak. Survey data available for April hint at a far steeper rate of economic decline in the second quarter as the country locked down more intensely to fight the virus.

With businesses being encouraged to reopen where possible and social mobility restrictions being slowly eased, the rate of decline should ease as we move towards the third quarter. However, the recovery looks set to be slow due to the need to keep many restrictions in place for many months to come and a likely squeeze on consumer spending due to rising joblessness.

Data from the Office for National Statistics showed GDP falling by an unprecedented 5.8% in March, dragging GDP for the first quarter as a while down by 2.0%, its steepest fall since the global financial crisis in 2008.

The official data corroborate the survey data, which have shown the economy collapsing as restrictions to limit the spread of the coronavirus have become more widespread, in the UK and globally. The headline all sector output index from the IHS Markit/CIPS surveys fell to an all-time low of 36.3 in March. Prior to March, the previous low in the 22-year survey history was 37.5, reached in November 2008.

However, with the PMI having slumped further in April to just 13.4, the scale of the decline in GDP looks likely to have accelerated markedly further from the 5.8% monthly drop seen in March. As such the second quarter is on course to see the one of the steepest contractions in the economy ever recorded, far exceeding the declines seen in the global financial crisis. 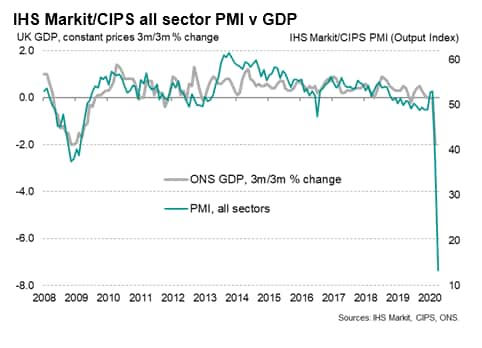 In most cases, the implied rate of change in GDP can be estimated accurately by using the PMI as a guide to the quarterly rate of change. Usually, we base our estimates on a regression that uses the PMI as the sole explanatory variable of quarterly changes in GDP. This model pointed to a 1.7% quarterly rate of contraction in March, accelerating to 4.5% in April. However, this model has no prior data on which to estimate a GDP decline of the scale that is likely to occur in the second quarter.

Even using a log-based model, which tries to capture some of the non-linearity that is likely to be seen between the PMI and GDP at such times of stress, GDP is only indicated to be falling at a quarterly rate of around 7%. In reality, given the hit to consumer spending due to social distancing and the severe extent of the business closures across the economy in sectors such as retail, hotels, restaurants and other consumer services, as well as less severe closures in factories and other non-essential businesses, the decline in GDP could be far greater than signalled by the PMI.

Looking at the detail, the sector trends matched those being seen in the PMI. The downturn in March was led by the service sector, where output collapsed by 6.2%, leaving the first quarter 1.9% lower than the final three months of 2019. 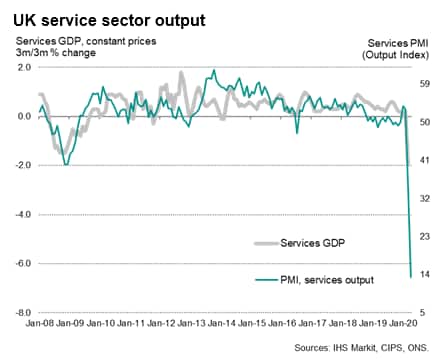 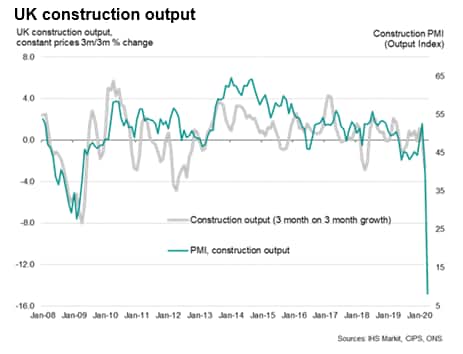 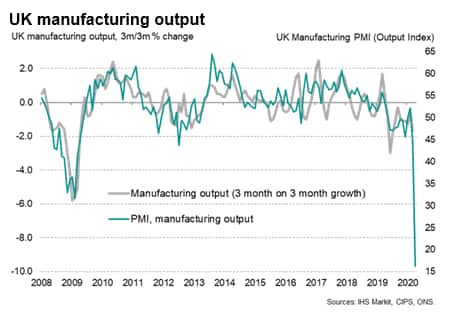 With the government recently announcing its roadmap of how virus-related restrictions will hopefully be lifted over the course of the coming months to restart closed parts of the economy, it is likely that the PMI April output index reading will hopefully represent a low-point, assuming there is no second wave of COVID-19 infections. Indeed, the survey's future expectations gauge, which asks companies about their views on their own likely output in a year's time, lifted from March's all-time low. Optimists even exceeded pessimists in April, with the index rising back above the neutral 50 mark. 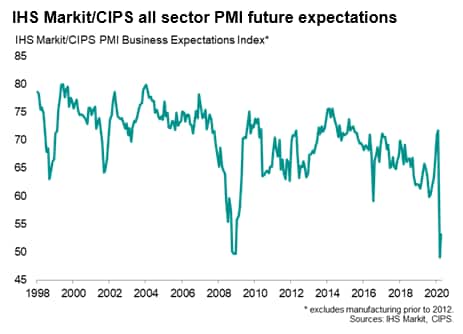 To get a handle on the extent to which the downturn may have eased in May we look forward to the flash PMI data, which are released 21st May.