Background
Recently the European Council, as part of the COVID-19 recovery package, adopted a proposal to levy a plastic tax with effect from 1 January 2021. A new revenue stream is proposed to be mobilized through new taxes on plastics and is embedded in the EU's long-term budget (2021-27) or Multiannual Financial Framework (MFF) account. 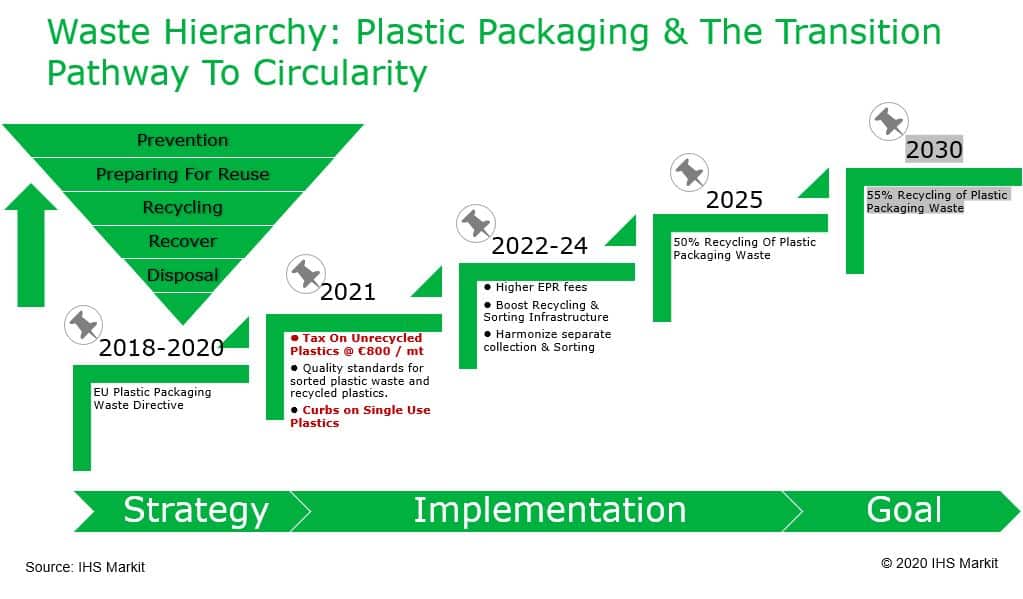 The Proposal
The levy will be composed of a share of revenues from national contributions calculated on the weight of nonrecycled plastic packaging waste with an effective rate of €0.80 per kilogram, effective 1 January 2021. The proceeds from the tax will be used to support the general EU budget but shall not be used as a repayment mechanism for EU borrowings, especially at international financial markets. Although the EU plastic levy proposal does not envisage recovery in the form of national taxation, the payments will come from the national budgets and Member States will likely (not obligatory) use this opportunity to create equivalent plastic levies at national markets to recoup the costs of their contributions to the EU budget. Member States have already initiated different national tax projects according to local situations: e.g., Finland (packaging made from nonrenewable natural resources), Italy (single-use plastics except compostable or recycled plastic), Lithuania (composite plastic), Spain (nonreusable plastic packaging), Slovenia (composites and plastic coated paper), and the UK, which will soon exit the EU (plastic packaging that does not contain at least 30% recycled plastic). The levy will be paid annually by each Member State. It will create a new burden for manufacturers placing packaged goods on the market, because it will be based on the amount in weight of plastic placed on the market/waste generated, and not on the plastic waste recycled. As a result of earlier negotiations, countries with a per capita gross national income below the EU average will be eligible for a rebate. The amount paid to the EU on this basis amounts to €6.6 billion annually, minus the rebates to various countries estimated at €700 million to €800 million.

What is Unclear
There are some open questions regarding the tax proposal and implementation mechanism. First, the tax is set to be imposed on the countries, and not on the polluters or the consumer packaging companies. The onus of recouping the tax amount already paid to the EU treasury is left to individual countries. So technically, each country can devise its own scheme to pass the cost on to the packaging companies while some might even absorb the cost and recover in some other manner. Since weaker countries are exempt, which will create an asymmetry in terms of the levy across Europe, and if each country devises its own mechanism to recover the cost of the plastic tax, then it will lead to fragmentation of the EU market and work against the single-market concept. Moreover, if a set of countries imposes the tax while others do not, then there is a chance of migration of packaging companies or part of their activities to countries with less tax burden. Another big topic that is unclear is the methodology of determining the unrecycled quantity. The resource mobilization target of €6.6 billion (less €700-800 million) is derived from the Eurostat reported recycling rate of 42% (thus, the unrecycled rate of 58% or 7.5 million metric tons), which is based on the directive 94/62/EC, which measures recycling at gross level or post sorting stage. The old directive has been superseded by the new directive issued in 2018, which measures recycling at the input level to the recyclers. Under the new directive, the recycling rate is much lower at around 30%. In fact, if all the provisions of the new directive are applied, then the recycling rate will fall further to around 25-30%, raising the unrecycled rate to 70-75% or even more. It is not clear yet when this new methodology of computation will be implemented, but when it eventually is, the tax burden will increase on countries, and by extension, on the packaging companies.

Effect on circularity
As we know, EU policymakers want to transform the European plastic economy from a linear one to a circular one by 2030. This transition is expected to be accomplished by raising the recycling rate, converting plastic waste into secondary raw material, and making packaging reusable and recyclable. This approach will require significant resource allocation in terms of building recycling and sorting infrastructure, changing standards, and improving design principles. The plastic tax is aimed at imposing penalties for not recycling; however, the fund accrued will be spent in bridging the EU budget, rather than building resources needed to achieve circularity. The target is to raise the cost of packaging to such a level that it acts as a disincentive and triggers product and design switches to products that are considered more environmentally friendly from a circularity perspective.

Effect on Polyolefins
As the EU plastic tax implementation profile is evolving, it is challenging to forecast the impact it is likely to have on the plastic market in general and polyolefin market in particular. Therefore, we have made some assumptions about the arc the EU plastic tax proposal is likely to take in order to write this section. Firstly, the onus of cascading the tax to plastic packaging companies is left to the individual countries. It is unclear if and how the countries will pass along the tax. Since the tax burden is not uniform across the countries and some countries may get concessions, it is uncertain whether the various countries will develop similar mechanisms and levy charges on the packaging companies. In addition, it is not yet known how the countries will evaluate the recycling rate and how soon the methodology will reflect the new directive announced a couple of years ago. It is important to define this methodology, as it will raise the "unrecycled" plastic packaging evaluation significantly. For simplicity, we have assumed that the tax will be cascaded uniformly to the packaging companies across the countries. The rationale driving this assumption is that EU partners are unlikely to breach the single-market principle and may not want to complicate the situation by having multiple regimes on this front.

Therefore, it is assumed that the plastic packaging companies will pay an equivalent of €800 per metric ton on the unrecycled part of their packaging starting in 2021. Considering the 58% unrecycled packaging waste being reported by Eurostat, the cost of packaging would rise significantly, estimated to be between 20% and 60%. The cost of packaging as a percentage of cash cost varies from product to product and ranges between 1% to 10% depending on the product being packed. Considering the above, inflation in cost, and a median cost percentage of packaging in the total cash cost of the final product, the cost inflation of the latter could be between 3% and 8%, which is very high and something that the consumers are unlikely to accept. This scenario will leave the packaging companies with limited choices, as absorbing the cost is not tenable because this will erode their bottom line. So, the possible outcome would be as follows:

Overall, the plastic tax will redefine the plastic business in Europe, although much ground needs to be covered before the outcome of the tax becomes clear. There is no doubt that the tax will be rolled out, and therefore the industry needs to proactively process the various scenarios delineated above to assess the impact on their business profile.