Sustainability of the national healthcare insurance rapidly challenged
Healthcare coverage started to be implemented in South Korea in 1977 and universal healthcare coverage was achieved at a fast pace in 1989. While South Korea is one of the largest economies in the Asia Pacific, the sustainability of the national healthcare insurance came under threat following the Asian financial crisis in 1997. Additionally, public healthcare expenditure has significantly increased over time, with double-digit growth rates commonly experienced.

Towards cost-containment policies……impacting the healthcare sector
As a consequence of the Asian financial crisis and the ever-increasing public healthcare expenditure, cost-containment policies have been implemented in the country. One of the most significant reforms came into play in 2000 and separated prescription and dispensing. Previously, pharmacists were allowed to provide medicines to people who did not hold a valid prescription and physicians were allowed to dispense drugs to patients. After the reform, only physicians are allowed to write prescriptions and only pharmacists are allowed to deliver treatments to people with a valid prescription. Although savings were made, additional fees were spent for physicians' visits. Price cuts are mostly explained by the availability of a great number of generics in our sample, and the fact that the legislation surrounding generic pricing changed in January 2012. Originator drugs must reduce their price 30% upon generic entry (versus 20% previously). Generic prices must drop 59.5% (compared with the originator price) and 53.55% one year after generic entry.

Nevertheless, prices of innovative drugs that are still on-patent were also cut. For instance, our data showed that the drugs Ventavis (iloprost, Bayer, Germany), Ziagen (abacavir, GSK, UK), Tarceva (erlotinib, Roche, Switzerland), and Tyverb (lapatinib, GSK, UK) experienced price cuts of 7%, 6%, 3%, and 2%, respectively between 2011 and 2012. It should also be highlighted that these examples are not isolated. Price cuts experienced by innovative drugs are nevertheless lower than for generics.

Finally, our analysis indicates that price cuts for 2013 through 2025 are already planned by the government! In 2013, price cuts are already planned for 17% of the drugs included in the positive reimbursement list. The price cuts will not necessarily target just generics--certain innovative drugs will also be impacted. For instance, the price of the drug Lyrica (pregabalin, Pfizer, US) dropped 30% in 2012 and is due to fall by a further 23% in 2013. This drug, intended to treat anxiety disorders, epilepsy, or neuralgia, is still patent-protected. 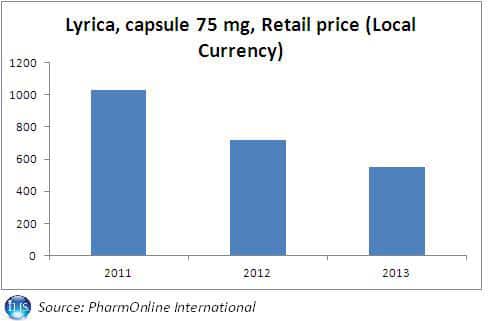 Conclusions: Towards more price cuts in the future and possible withdrawal of pharmaceuticals from the reimbursement list
Pharmaceuticals in South Korea are largely impacted by cost-containment policies and suffer substantial price cuts, even when drugs are still patent-protected. The government has already planned price cuts for next year through 2025, demonstrating its appetite for securing further savings. In comparison with other countries, the positive list contains a greater number of pharmaceuticals in South Korea. As a consequence, and in an attempt to make savings, it is also very likely that in the future, the government may choose to withdraw medicines from the positive reimbursement list.