PFLNG Tiga – Another sticking plaster or a long-term solution?

In August 2021, PETRONAS issued a tender for a third floating liquified natural gas (FLNG) vessel, to be named PFLNG Tiga (PFLNG 3). Initially, there was some confusion about where this vessel would be located but it has become clear that it will be used to solve some of the challenges in commercialising gas offshore Sabah, Malaysia.

In terms of oil and gas investment, the Malaysian state of Sabah has always played second fiddle to Sarawak, where the industry has been built up around the export of LNG through the MLNG complex in Bintulu, with the gas coming from a large number of offshore fields.

Though long recognised for the development of its deepwater oil, Sabah has proven itself to be equally prospective for gas, with several significant discoveries being made in the past three decades. However, the development of these discovered gas resources has been stymied by a lack of commercialisation options, with the existing processing facilities (Labuan and SBGAST) providing limited capacity and domestic gas demand unable to support the development of key offshore discoveries, including the Kebabangan cluster.

To counter this, the Sabah-Sarawak Integrated Oil and Gas Project was conceived by PETRONAS. This would link the gas fields in Sabah to the MLNG complex in Sarawak and was composed of two main elements: 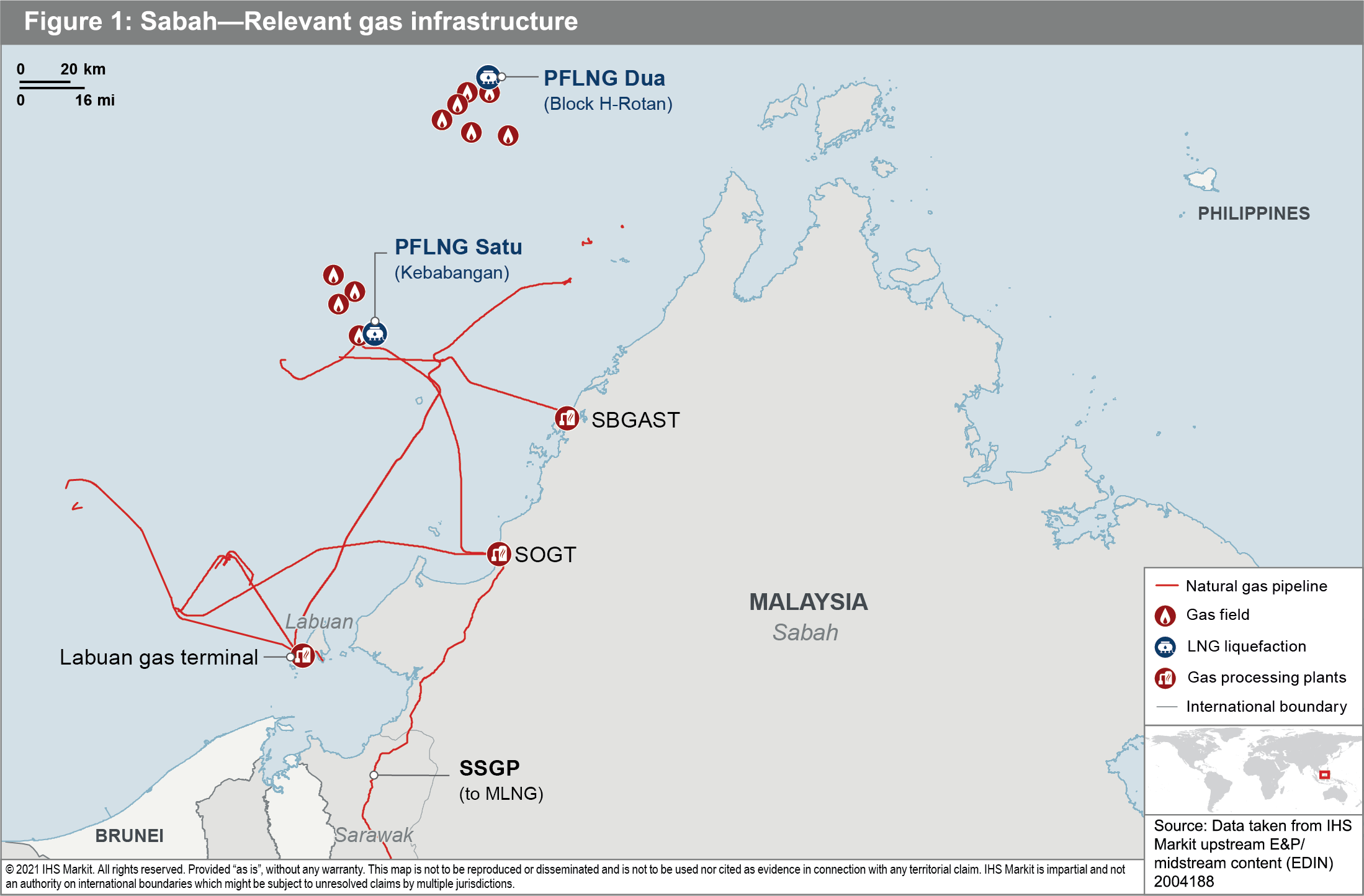 If all had gone to plan, then we would not be looking at a third PFLNG vessel. However, the SSGP has been beset with issues including leaks and explosions, with the first in June 2014 and the most recent in January 2020. This has seen the pipeline shutdown for extended periods for repairs and testing and it has been offstream since January 2020. As a result, gas volumes exported from Sabah to Sarawak have been far below plan and, in-turn, this has limited the production rates at the upstream fields in Sabah, whilst also decreasing the feedstock for the MLNG plant.

The Kebabangan cluster was the largest of the new project developments to take FID on the basis that the gas could be sent to the MLNG complex for export. The Kebabangan development came onstream in November 2014, with the field expected to export gas at a rate of 750 MMcf/d, with both the gas and liquids exported to SOGT through separate pipelines, with the gas then sent to MLNG through the SSGP.

The PFLNG Satu (PFLNG 1) vessel has a nameplate capacity to produce 1.2 mtpa of LNG and became the first FLNG vessel to ship a cargo in April 2017. The vessel was located at the Kanowit field, which already had an existing gas pipeline linking it to MLNG. This application allowed the vessel to be tested, whilst any teething problems would not see the field shut in.

Given the SSGP issues, a decision was made to move the PFLNG Satu vessel to the Kebabangan field and, in May 2019, the vessel received its first gas from Kebabangan. Whilst this was a good and innovative solution, it was far from ideal for the Kebabangan partners as the capacity of PFLNG Satu is only about 20-25% of the SSGP, thus continuing to limit the production from the field.

So, how can the problem be solved and where does PFLNG Tiga fit?

Another option, and one that has been long discussed, would be for a dedicated LNG liquefaction plant to be built in Sabah. However, this would require at least 20 years of feedstock to justify and would also be a tacit admittance that the SSGP will never come back onstream.

This is where PFLNG Tiga comes in, as it provides a flexible solution and optionality based on the future of the SSGP and the Kebabangan field. The vessel is reported to have an export capacity of 2 mtpa of LNG and it is understood that the vessel will likely be located close to SOGT. When combined with PFLNG Satu, this would provide a total export capacity of 3.2 mtpa, still well below the planned production rates for Kebabangan.

However, this solution provides a huge amount of flexibility that covers various future scenarios of the SSGP. The chart below shows the potential build up of production from Kebabangan based on these different solutions, with the assumption that the SSGP will be limited to 50% of its nameplate capacity of 750 MMcf/d. 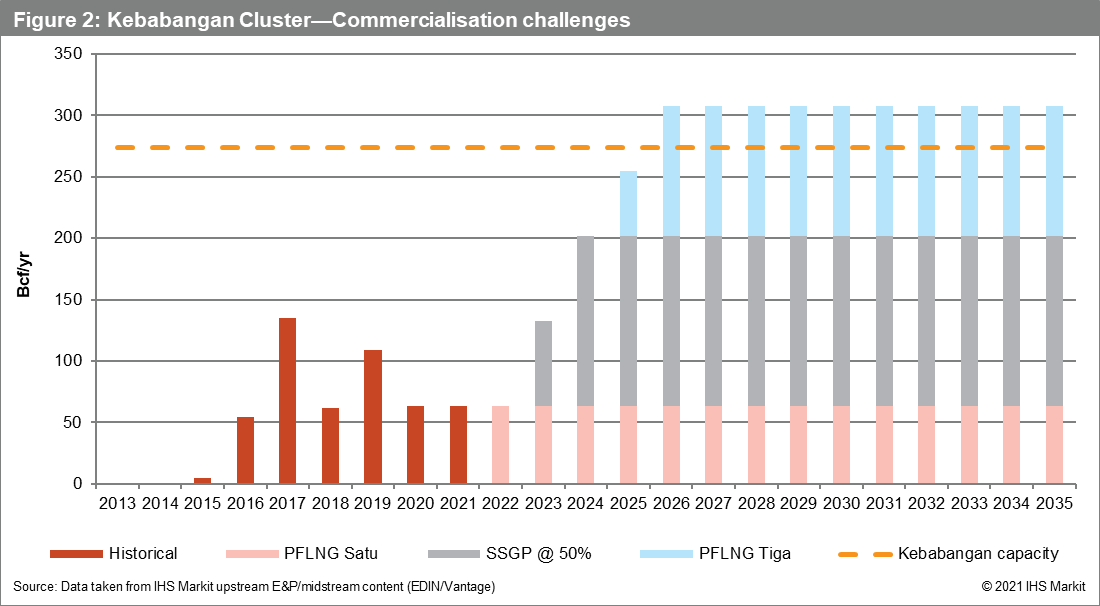 The PFLNG Dua (PFLNG 2) FLNG vessel provides the market access for fields in Block H, that is remote from the existing Sabah gas pipeline infrastructure. Given this, an FLNG vessel was a logical concept to consider and eventually select for the deepwater gas fields.

The development was brought onstream in February 2021 and, if all goes as planned, then the Block H fields will continue to supply PFLNG Dua at around its export capacity and undeveloped fields in the block will be brought onstream to maintain production at this rate. 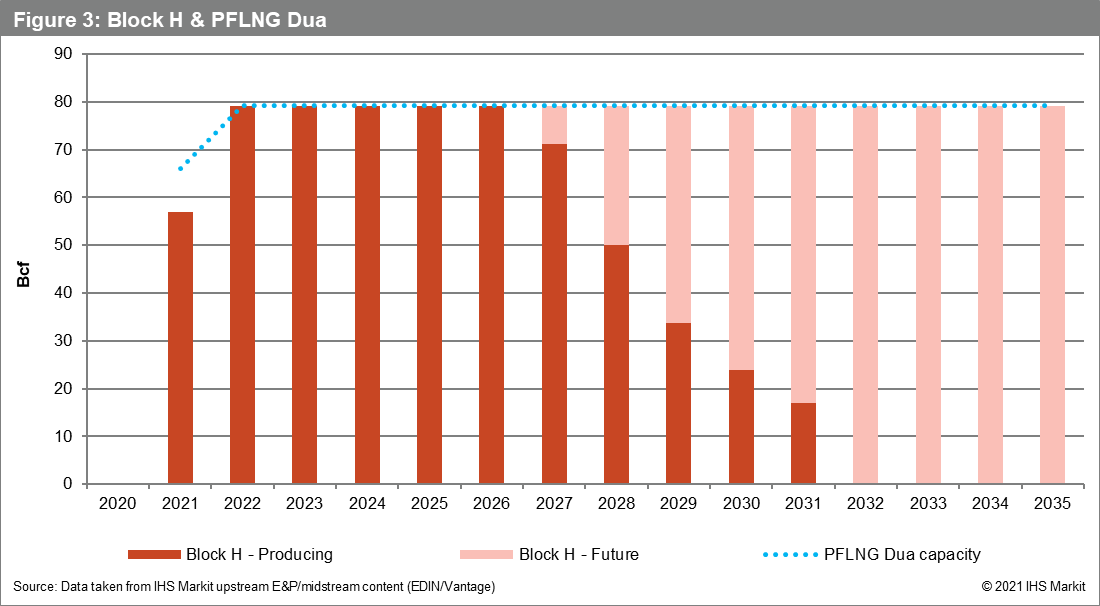 What does this mean for upstream investment in Sabah?

Upstream investors have significant concerns about the gas commercialisation in Sabah. This has limited their desire to invest in exploration, unless it is oil focused. Whilst PFLNG Tiga should provide a reliable commercialisation option that will also give PETRONAS flexibility to adapt to the potential future reliability of the SSGP, it would seem almost the entire capacity of PFLNG Tiga would be utilised by the Kebabangan field, leaving little room for other players.

If the SSGP was to reliably come back onstream, then PETRONAS could consider relocating either PFLNG Satu or PFLNG Tiga to commercialise other gas fields in Sabah or Sarawak.

Will this be enough to bring upstream investors back to exploring for gas in Sabah? I'd say that for now at least, they will be watching with interest, but not moving or spending.

What about the impact on MLNG?

In January 2017, MLNG train 9 came onstream, increasing the total capacity of the MLNG complex to approximately 30 mtpa. However, output increases have not followed, with the lack of supply from Sabah being one of the key contributing factors. The MLNG partners will be keen to improve utilisation and a number of gas fields in Sarawak are being developed to this end. Once this supply comes onstream, the opportunity for Sabah gas to be commercialised as feedstock at MLNG would reduce, creating a further constraint on Sabah gas production.