Petrochemical capacity in China and Middle East: Growth amid challenges

Global oil producers, mindful of the seismic shifts in fuel demand, are transitioning their yields from gasoline and diesel to higher-growth products like petrochemicals.

By the end of this decade, most of the growth in oil demand will come from the petrochemicals sector, with the Middle East region and China emerging as key production hubs.

Here is a petrochemical industry outlook focusing on China and the Middle East.

Asian petrochemical production will compete with Middle Eastern output in the coming years as both regions are poised to become important petrochemicals centers.

Mainland China's growth in petrochemicals over the past two decades has been described as "prompt investment and strong competition." Production technology was increasingly made available as the country took huge strides in building large facilities. With access to raw materials and easy financing, the industry shifted toward specialty chemicals, reflecting demand trends and the country's increasingly sophisticated industrial output.

However, Chinese players are adapting to new constraints with the government's move to tighten credit across the economy. This may prove to be an impediment for the capital-intensive petrochemical industry. Environmental regulations are also being ramped up throughout the country, which adds to operating expenses.

Chemical production in Mainland China is still very much scattered geographically with more than 650 large clusters spread throughout the country for the petrochemical industry alone. However, from this decade onwards, major investments will be approved mainly in five large clusters. Emphasis will be given to concentrating new, large-scale projects and moving existing ones into a few, well-managed zones. 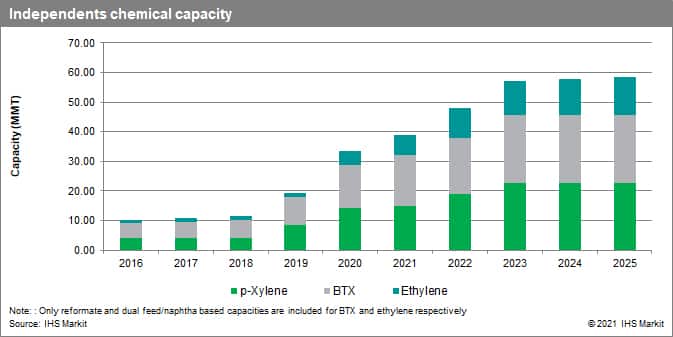 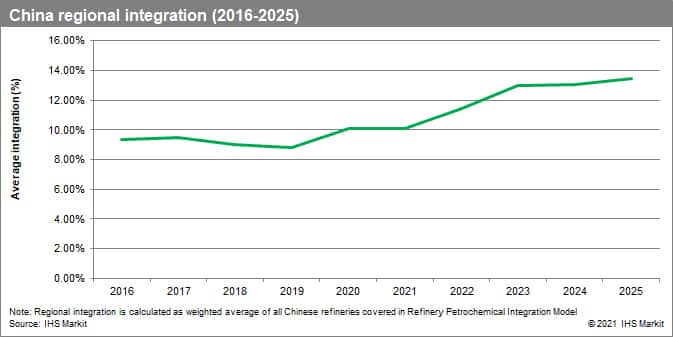 The country has also been the frontrunner in establishing large, next-generation refining/petrochemical complexes with chemicals yield of up to 40%, with several new and ongoing investments at multiple locations planned during this decade. Some prominent examples:

With such large projects slated to come online in next few years, overcapacity is a possibility with an inevitable squeeze in margins potentially triggering a wave of consolidation, especially among smaller-scale players.

Interestingly, in Mainland China, private players are driven more by incentives than growth outlooks for petrochemicals as taxes are lower than those for refined fuels.

Planned megaprojects could help eliminate China's petrochemical imports, but could also worsen its surplus of refined fuel products. China is already grappling with distillation overcapacity. New sites could also make it increasingly difficult for Atlantic Basin refiners to export their surplus gasoline and could accelerate refinery closures in Europe and the United States in this decade.

Petrochemical capacity in the Middle East: Growth could be hampered by feedstock avails

The Middle East has made significant investments to increase its crude oil processing capacity through last couple of decades. These investments will continue through the early 2020s.

The region has also been making moves to diversify its products portfolio through the addition of large petrochemical facilities. The region's investment initiatives are aiming on refinery-petrochemical integration as a means of producing even more value-added products from indigenous crude resources.

The region is slated to see a substantial increase in petrochemical production as several nations are building or have firm plans to build mixed-feed crackers along with capacity for ethylene derivatives, ammonia/urea, and other petrochemicals. It is estimated that around $90-95 billion is planned for investment into greenfield and brownfield petrochemical facilities through this decade's first half, in and around the region.

Availability of natural gas liquids (NGL) feedstock, such as ethane, reduces the dependence on refinery-based liquid feedstocks. However, this resulted in a lower degree of refinery petrochemical integration in the Middle East as ethane/propane is used to generate ethylene/propylene in standalone facilities.

The challenges for Middle Eastern players will arise from the lack of new, low-cost gas feedstock availability in the future. New petrochemical production projects in the region will rely on refinery-based feedstocks, such as liquefied petroleum gas (LPG) and naphtha, in increasing proportions. This will lead to the region seeing increased levels of integration between refineries and petrochemicals through mixed-feed olefin crackers and allied units.

Middle Eastern players have enjoyed a petrochemical feedstock advantage against the rest of the world, but at the same time they are also anticipating a throttling down of the flow of gas-based feedstock leading to lower reliability and likely price increases. This has convinced producers to repurpose crackers and use more refinery-based feedstock like naphtha and LPG.

Key obstacles in the Middle Eastern scenario, which affect most of the players, lie with the fact that most refineries and allied assets are owned by their respective governments and investment strategies have been usually linked to long-term energy policies on fuels management. Investments in chemicals are often undertaken in partnership with foreign investors and these investors often have different objectives compared to state-owned refiners.

However, consolidation among major petrochemical producers in the Middle East is picking up pace as state-owned companies look to manage costs in the volatile global market. The integration moves come as global oil and gas companies adjust to receding margins and higher costs amid the backdrop of the COVID-19 pandemic and global economic downturn. The most recent and largest consolidation in memory saw the world's biggest oil producer, state-controlled Saudi Aramco, acquire a 70% stake in SABIC.

The market downturn has led to petrochemical projects around the world being delayed and investment decisions deferred as companies reassess spends. Even Saudi Aramco has scaled back its 2020-21 capex plans in response to lower prices due to pandemic-led demand destruction. The current downturn puts extreme fiscal pressures on government and private sectors alike. A few committed projects are expected to face strong headwinds or get cancelled.

The road to the predicted petrochemicals windfall is a tough one with financial constraints, competition among producers, and maneuvering geopolitics in a market grappling with bleak demand scenarios and an ongoing pandemic.

Company Strategies and Performance (CSP) from IHS Markit helps you to better understand your competitive position so that you can spot threats and opportunities in the market and act accordingly. Rely on a unique combination of in-depth analysis and data which compares the strategic direction of the top chemical producers, as well as the refining and marketing performance of major downstream operators globally. Learn more here.

Anubhav Gupta, Research and Analysis Associate Manager, and Simratpal Singh, Research Analyst, are both with the Chemical Consulting team for IHS Markit.