On 20 June, a major explosion at PES, the largest refinery on the east coast of the United States, compromised the facility's gasoline production capacity for an indeterminant amount of time. The following week, on 26 June, news broke that PES would be ceasing operations because of the accident. On July 21, PES filed for Chapter 11 bankruptcy. Court filings indicated that the Girard Point segment of the refining complex was devastated by the incident while the Point Breeze segment remains partially operational, until the facility is expected to close in August, partially in response to concerns from the facility's large union workforce. PES is attempting to collect on an estimated $1.25 billion in insurance from both property damage and business interruption. The Sunday filing secured $100 million in incremental financing to get through the bankruptcy proceedings. PES owes payments to nearly 4,000 companies and individuals, according to the filings, with at least 50 larger creditors, including several railroad companies, Sunoco, and Colonial Pipeline, among many others, with (rough) estimate of the assets owed falling between $1 and $10 billion.

The closure of the refinery will have a substantial impact on the market for refined products on the US East Coast, as it faced increasingly difficult operating conditions well before the 20 June explosion, in addition to long-term challenges in the changing conditions of the US refined product market. As its current owners move to close the refinery, importers, gulf coast refiners, and PES's competitors in PADD 1 are all likely to benefit, even as prices for gasoline, diesel, and residual fuel oil (RFO) increase to reflect the impact of the closure.

Implications of the closure of PES

The rapid rationalization of 335,000 b/d of capacity in PADD 1 will have an immense impact on the topline refined product output in the PADD. Within PADD 1, product demand will need to rely on stocks as the market adjusts. Other PADD 1 refiners, such as Bayway (Phillips 66), Delaware City (PBF), Trainer (Delta Airlines), and Paulsboro (PBF) all stand to benefit from the reduced competition, leading to increasing gasoline and diesel prices, and hence, increased margins for refiners operating in the market. Irving's St. John refinery in New Brunswick, Canada, has primarily operated as a supplier to northern PADD 1 markets, and similarly stands to see increased relative margins in the wake of PES's closure. As per the chart entitled "North America refinery capacity rationalization forecast", the rationalization of PES extends the timeline by around five years before North American refiners face further rationalizing pressure due to demand destruction. In the shorter term, PADD 1-oriented refiners will face incentives to boost runs, and will likely do so to the degree that their physical capacity allows. New production coming out of these refineries will help to soften the blow of PES's closure on gasoline and diesel markets, though even if every PADD 1 refiner were to run at utilization rates of 100%, the system would likely be coming in short by nearly 100,000 b/d of gasoline, compared with the expected gasoline output with PES online. 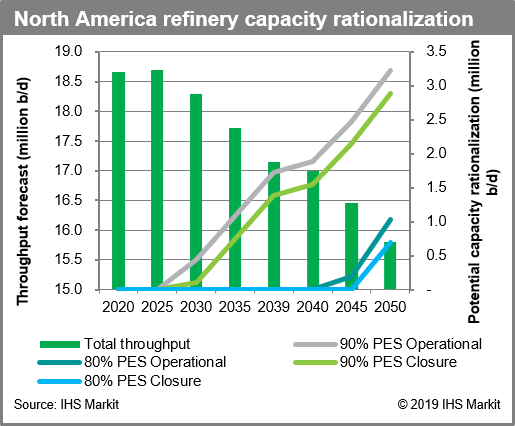 Fundamentally, the demand for refined products will need to be met by increased imports and transfers from other PADDs. Although PADD 3 has substantial capacity along the Colonial Pipeline, much of that capacity was already being utilized before PES's closure. Meanwhile, transfers from PADD 2 have limited available infrastructure to move product from the more robust PADD 2 region to the east coast. Hence, PES's closure also increases the incentive to reverse the Laurel Pipeline, allowing PADD 2 refiners in the Midwest to supply larger volumes to the mid-Atlantic. The pipeline has been held up, in part, because it would increase transfers into Pennsylvania and make market conditions that much more difficult for PADD 1 refiners. With PES closing anyway, the political will to fight the pipeline's reversal may begin to fade as gasoline shortages increase public willingness to accept transfers from PADD 2's higher conversion refineries.

Impact on the US and the Atlantic Basin 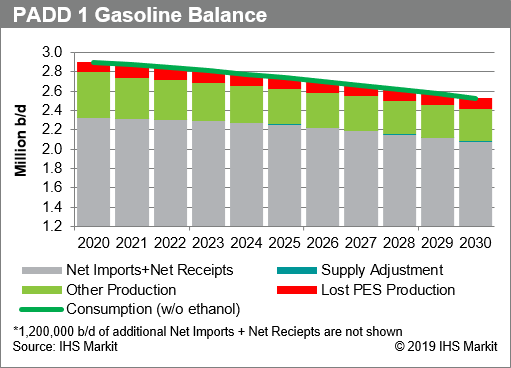 In the short term, the closure of PES will inevitably result in tightening supplies of gasoline, diesel, and RFO. Gasoline is the highest demand product in PADD 1, and the impact on east coast gasoline supplies has so far been the primary focus of commentary on the PES incident and closure, in part because the 20 June explosion primarily impacted the refinery's gasoline-processing streams. Gasoline tightness, and rising gasoline prices in the short term will be disrupted as distributors struggle to find sources of supply. However, new cargoes of gasoline have already been reported from Europe to fill the gap. European gasoline exports to the US east coast are already commonplace and European stocks have been high, indicating that the volumes are ready to send over, though the mechanism for this will include an increase in gasoline prices such that the arbitrage between Northwest Europe and the New York Harbor should be wider than previously expected, especially during the summer's high demand seasons. Several shipments from Europe to the US have since been reported through the month of July, and supply tightness has been enough to even secure at least one cargo from Brazil.

Diesel and RFO have received less attention than gasoline, in part because they are not in the midst of demand season, unlike gasoline. However, the loss of PES's diesel and RFO supplies will be more complicated, as European refiners typically direct their diesel production to meeting the large domestic demand, leaving no volumes available for export to the United States. Instead, PADD 1 diesel consumers are likely to rely on shipments of diesel up the Colonial Pipeline from PADD 3. The implications of this are twofold: first, that line space on Colonial will be even more scarce than it was previously, and that diesel might begin to push out other products, and second, that diesel will be directed toward meeting PADD 1 demand, and away from exports to Latin America, where much of the Gulf Coast's diesel exports are currently directed. Other diesel importers in Africa or Europe also face this risk, and the likely result is an increase in the price diesel importers must pay for cargoes from the United States. 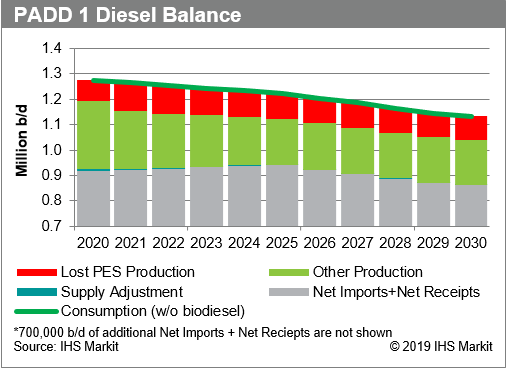 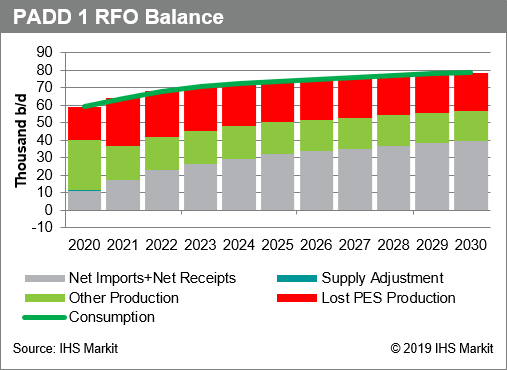 Numerous reports indicate that the quality of RFO being produced by PES did not meet US specifications for maritime bunkering, and so was already likely being exported outside of the United States to be burned for power generation. Other refineries, particularly in the Caribbean, that produced similar, low-quality RFO have also gone offline in recent years in preparation for declining margins owing to the impending maritime fuel specification changes on track for 2020 implementation. The most recent of which was Petrotrin's Pointe- a-Pierre refinery in Trinidad and Tobago last year. Buyers that rely on low-quality RFO will likely face rising prices, at least until the International Maritime Organization (IMO) spec change forces out large quantities of the fuel from the bunker market.

These near-to-medium term reductions in diesel and RFO supply will eventually benefit the completion of two major refinery projects expected to come online within the next few years. The first of these facilities is the Limetree Bay refinery in the US Virgin Islands, expected to restart operations later this year as part of a JV led by Arclight Capital Partners. The facility is expected to have a throughput of around 200,000 b/d, yielding 75,000 b/d of gasoline and 70,000 b/d of diesel at maximum capacity utilization (for more information on the expected impact of this refinery on the Atlantic Basin, see the recently released refining and marketing insight, entitled "Atlantic Basin markets—Philadelphia Energy Solutions Refinery shutdown creates opportunities for Limetree Bay Refining," released on 28 June 2019). The second facility, expected to come online in mid-2020 is the 650,000 b/d Dangote refinery in Nigeria, which hopes to capture rising African demand for gasoline and distillate. Although the refinery is hardly expected to begin operating at full capacity when it comes onstream, it will likely displace some required imports into Nigeria, making a large quantity of diesel and RFO available for import on the Atlantic basin.

You may also be interested in...
Is there a sunny-side to the IMO scramble?: IHS Markit Global and North American Refining Market Outlook - watch webinar

Due to a recent #oil price crash, diminishing demand and a plunge in capital investment, the #US is all but guarant… https://t.co/QECIHb6qmk

Govts & stakeholders are growing increasingly focused on understanding the implications of the energy transition on… https://t.co/D1yTbeNX8r

The recent drop in #oil prices has created an uncertainty about the future of most E&P and service companies. But,… https://t.co/EBvB3cUz0j