In the past decade, continued technology advances and cost improvements have made solar PV one of the most dynamic industries of our time, as it continues to make a significant and growing contribution to the global energy mix. Technological innovation is taking place in a context of extreme price competition among solar manufacturers, which explains the focus of the industry on decreasing manufacturing costs, increasing efficiencies, and reducing losses at all segments and stages of the manufacturing process.

The average efficiency of commercial silicon modules has improved in recent years, in the range of 0.3-0.4 percentage point per year. These efficiency gains have taken place in a very competitive environment, since module prices have fallen more than 70% in just the past six years.

However, since mainstream technologies, such as p-type passivated emitter and rear cells (PERCs), are slowly reaching their physical limits of conversion efficiencies, the industry is increasingly focused both on optimizing new techniques and innovations and on applying new PV materials and technologies such as perovskite. A perovskite solar cell (PSC) is a type of solar cell that includes a cubical perovskite structured compound, which is the light-harvesting active layer that is mostly based on a hybrid organic-inorganic lead or tin halide material.

The conversion efficiency of a PSC has been continuously increasing during the past 10 years. Considering that perovskite material for solar technology is in the very early stage of development, the efficiency improvements from 3.8% in 2009 to about 23% in 2018 are a staggering achievement. This efficiency learning curve is much steeper compared to any other emerging PV technologies. Although the efficiencies refer to lab efficiencies and not to mass production commercial cells, they still indicate that perovskites can have a huge impact on the solar industry.

The PSC technology shares many similarities with other so-called third-generation solar cells. Particularly in terms of cell design and processes it is very close to dye-sensitized solar cell (DSSC) and organic solar cell (OSC, or OPV cells). However, the rapid progress of PSCs can only partially be explained by that similarity, because each of the mentioned technologies is being developed independently.

There is more than one process to produce PSC modules. In its simplest method, PSCs can be manufactured by roll-to-roll coating, including well-known technologies such as slot die, spray coating, and ink-jet printing, or through evaporation. This process essentially eliminates the need for wafer manufacturing and other related processes used in crystalline silicon (c-Si) cells. 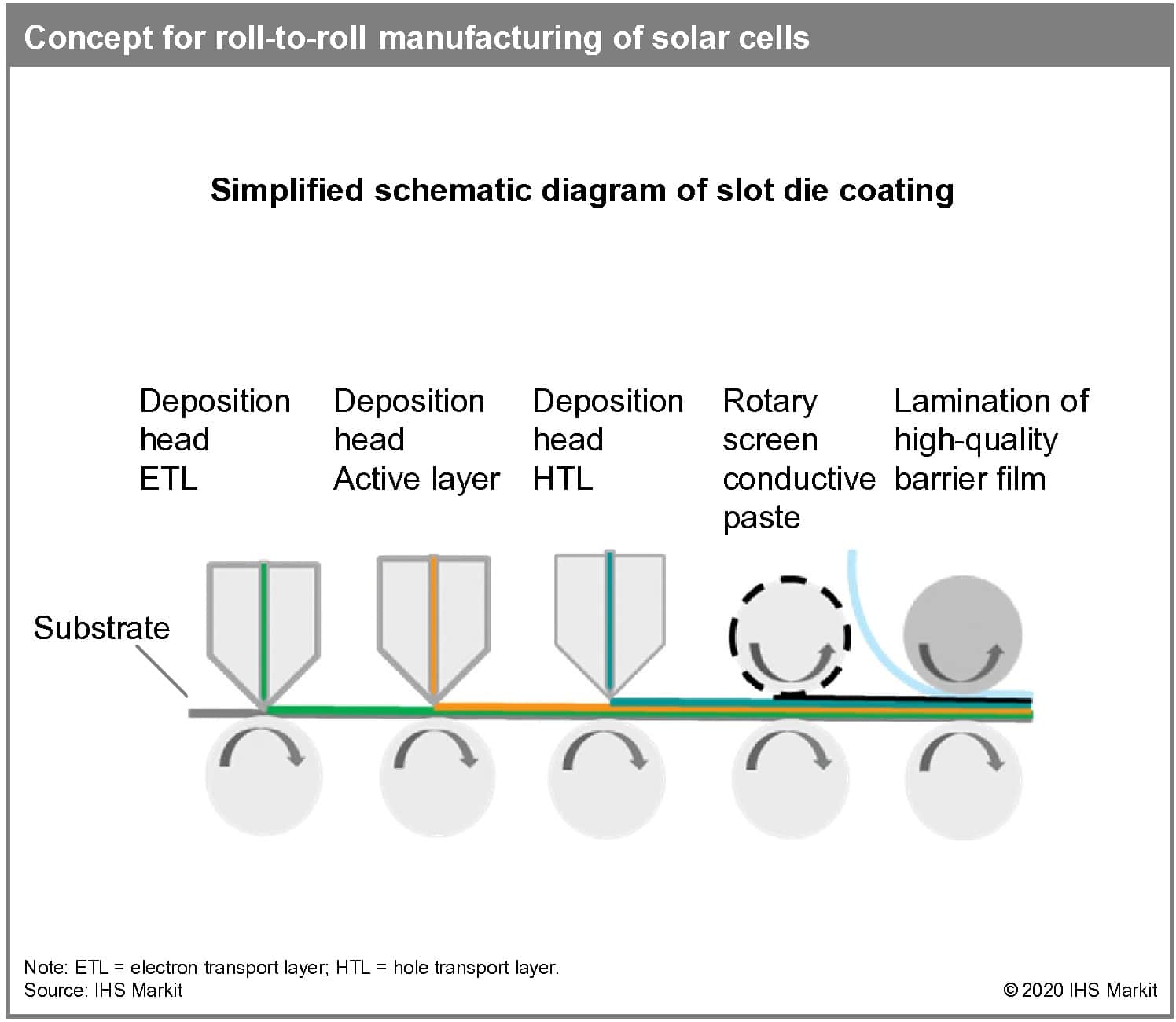 Another advantage of PSC manufacturing is that perovskite can be used in both single-junction and tandem-junction technologies. The single-junction technology is the simplest form, relying on a single layer of perovskite material, which supplies the photoelectric effect. In that form the PSC can reach conversion efficiencies of up to 23%. To increase the efficiency to 27% and beyond, many research institutes and start-ups are at this moment exploring using a tandem cell, which is a type of multijunction cell combining the PSC as an additional absorption layer on standard c-Si cells, or on thin films such as CIGS and CdTe modules. ​

Leveraging factors and barriers to Perovskites

The advantages of perovskite technology are straightforward. The perovskite materials are relatively cheap, compared with crystalline silicon, especially monocrystalline p-type and n-type, since this technology does not require the use of polysilicon, silver paste, and other materials used in standard c-Si modules. It can achieve higher efficiencies because of long carrier diffusion length within the material, and there is a possibility to choose the color (absorption band) of the panel, because of widely tunable bandgap of the material. The PSCs can operate with single-junction and multijunction technologies (with c-Si and thin film), and are suitable in different applications and segments, such as building integrated photovoltaics (BIPV), as well as utility-scale solar plants.

However, the PSC technology still requires further improvements in several important factors, such as the strong degradation in presence of moisture, oxygen, UV light, and high temperature; as well as the toxicity of lead and tin, which are used during manufacturing, and which can become apparent during operation, and at end of life.

Another important area of improvement is the cell size. The mentioned record efficiencies of 18-23% that are constantly advertised in the news have been achieved with very small cells, while cells that have a size compatible with actual commercial use still exhibit much lower efficiencies of 10-12%.

In sum, the technology still must demonstrate that it is ready to fulfill all requirements and move from research cells tests to commercial module production. 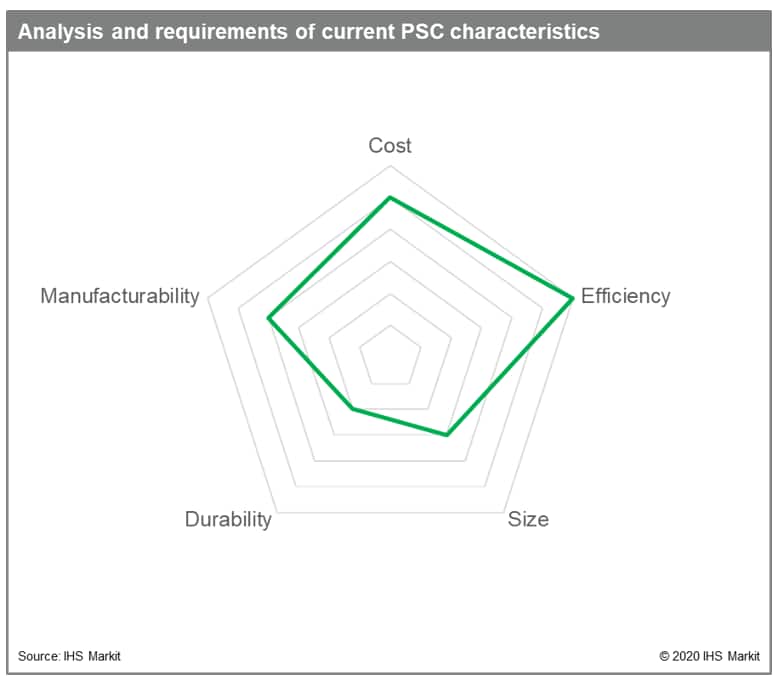 PSCs have potentially more advantages than c-Si cells in BIPVs. It has the ability to have colored cells, the ability to choose different sizes and the transparency of the panels, as well as flexible and curved design, PSCs seem to be a more suitable technology for BIPV applications than c-Si cells, which cannot or can only partially replicate that factors. Since many BIPV projects are installed in prestigious buildings, price sensitivity remains lower than in standard PV installations and therefore more favorable to the early adoption of PSCs. The application and competitiveness of PSCs technologies in other rooftop or ground applications would still require a further development of materials, targeting much higher efficiencies in tandem or multijunction structures, and a significant production cost reduction to reach commercial applications. In our recent "Perovskite Solar Cells Report" published in January 2020, IHS Markit forecasts that the industry will be ready for mass production and commercialization of perovskite cells (in single- and multijunction architectures) in the next three to five years.

To date, there are only a few pilot lines producing PSCs and only a handful of demonstration installations worldwide. The production capacity of perovskite modules is limited to pilots and demonstration projects, and IHS Markit estimates the total installed capacity does not surpass 20-30 MW globally. However, numerous equipment manufacturers and research institutes are heavily investing in developing and advancing the technology to increase conversion efficiencies and improve current challenges with instability and degradation of perovskite cells. Some companies have publicly announced they will start commercial production already in 2020. To illustrate, Saule Technologies for example, is ramping up at this moment its production lines in Poland, and Oxford PV is working with equipment supplier Meyer Burger transfer its tandem cell technology to launch commercial production during 2020.

Karl Melkonyan is a Senior Research Analyst at IHS Markit.