Permian M&A: Hot and getting hotter 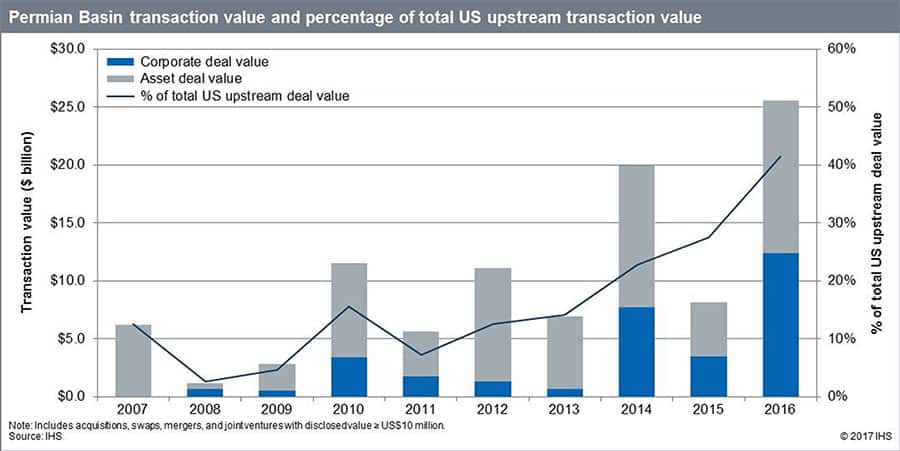 Capital will continue flow freely to both basins as the stocks of Permian pure-play operators, and those larger players with significant exposure to the Permian, all trade at premiums to both net asset value and peer-equity valuations. And, these highly valued Permian deals will continue to be financed with richly valued secondary equity offerings, thus limiting some financial risk to the acquiring company.

M&A activity slowed globally since the oil-price collapse in the fall of 2014. However, in the US that started to change as the industry focused its attention on the Permian Basin, arguably the most significant of the world's "Super Basins." IHS Markit defines "Super Basins" as those basins that have produced at least 5 billion boe; still contain at least 5 billion boe of recoverable resources; and contain multiple stacked plays and more than one source rock/petroleum system.

The Permian M&A scene exploded in 2016 with over $25 billion in total deals, which follows a year with less than $10 billion in deals. So far in 2017, industry has announced more than US$17 billion dollars of Permian deals, which is nearly 70% of the 2016 total. M&A deal prices increased during the year from an average of around $25,000/acre to almost $40,000/acre. Two transactions, one each in the Midland and Delaware basin, closed at more than $60,000 per acre.

Two-thirds of the $25.6 billion in total Permian upstream deal value came from the Delaware Basin, which offered a relative acquisition cost advantage to the nearby Midland Basin due to the perception of relatively higher risk due to a lower horizontal well count. However, even the Delaware discount narrowed considerably in the second half of 2016 thanks to several deals that exceeded $40,000 per acre and RSP Permian's US$2.5 billion acquisition of Silver Hill Energy (US$62,138/acre). QEP's US$0.6 billion deal in June 2016 for nearly 10,000 held-by-production acres in the Midland Basin still sets the high-water mark for acreage comps at US$63,830/acre.

There remain ample opportunities for investors to enter both the Midland and Delaware via acquisition. In the Delaware, we note the relative outperformance of Patriot Energy's acreage in eastern Reeves County. The Dallas-based operators' position is near to many public and often acquisitive companies, including Diamondback Energy, Concho Resources, Apache, Occidental Petroleum, and Parsley Energy.

Patriot's horizontal drilling activity has mostly targeted the Wolfcamp Formation, from which 10 of its 11 wells are producing, the remaining well is producing from the Bone Spring Formation. These 11 wells have an average peak rate of 133 boe/d per 1,000 lateral ft and a 30-day average peak rate of 798 boe/d. This ranks slightly below the group median of 140 boe/d per 1,000 lateral ft, but is above the median 30-day peak rate of 741 boe/d for Delaware Basin.

In the Midland Basin, we note the aggressive development schedule by Permian Resources, a former affiliate of the late Aubrey McClendon's American Energy Partners, LLC. Permian Resources holds 85,000 net acres in Reagan County, and has been the most active private operator in the Midland since January 2015.

We believe Permian Resources's acreage holdings are attractive assets, and offer a bolt-on acquisition to a company already established in the Permian or be acquired by a late entrant to the play that believes the core can be successfully extended. Significantly, Permian Resources well results to date underperform neighboring Parsley Operating, suggesting upside from improved well design. In fact, 16 of Permian Resources most recently drilled wells averaged 128.75 boe/d per 1,000 lateral ft, which is in line with the more productive private operators in the basin and an improvement from its prior average of less than 75 boe/d per 1,0000 lateral feet. 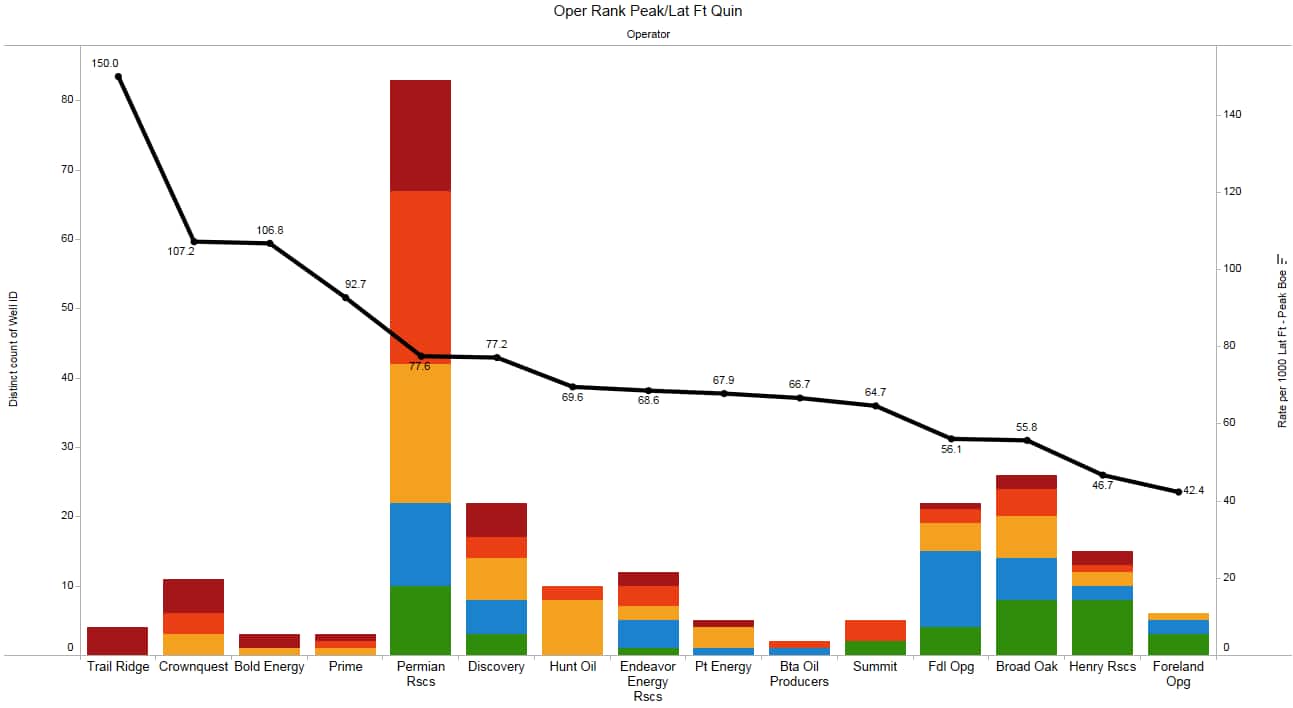 While high equity valuations and increasing investor appetite for growth are providing acquisitive companies with more freedom and flexibility, there remain operational challenges to truly creating shareholder value from these deals. We expect completion costs in the Permian region to increase by more than 20% in 2017, and access to labor, kit and pipeline capacity will favor those management teams that can leverage scale. All of these factors put additional pressure on privately held firms to monetize their positions, and for larger publicly held players of all sizes to aggressively increase their footprints.

Comprehensive analysis of M&A activity in the Permian and other key upstream plays around the world is available in the 2017 IHS Markit Global Upstream M&A Review and Outlook. The 2017 Outlook was published on IHS Connect on March 13 and the full report is scheduled for release to clients of the Energy Companies and Transactions research service in late March or early April. Learn about IHS Markit energy companies and transaction research.