Upstream activity in the Permian Basin has been on the rise lately. In December 2021, Permian oil and gas production increased to 5.28 million b/d and 19.8 Bcf/d from our previous estimates of 4.85 million b/d and 18 Bcf/d projected in October 2021. Processed gas is now forecasted to grow to 24.65 Bcf/d by 2026, about 1.5 Bcf/d higher than our previous view. Such an expected increase in processed gas will need a total of 5.2 Bcf/d of additional capacity by 2026, approximately 1 Bcf/d higher capacity than projected by IHS Markit in October 2021. This need is above and beyond the new capacity additions that have been announced, including recent plant relocations.

NGL production from the Permian is increasing with overall oil and gas production
In the October 2021 insight Will the US NGL-centric midstream system return to expansion mode, and will the US energy transition be supportive? IHS Markit indicated that the recovery of oil and gas production in the Permian Basin was expected to occur at a faster pace than anticipated earlier in 2021 and that near term capacity additions in gas processing would be required for our base case and high case scenarios.

By December 2021, crude oil production in the Permian Basin climbed to an all-time high, according to the latest data from the IHS Markit. Production from the Permian basin rose to nearly 5.28 million b/d during the month, surpassing the previous record of 4.86 million b/d in March 2020. Crude oil production from the Permian basin is expected to increase from its current level to 7.3 million b/d by 2026. Noting this upward trend in upstream production, along with overall global crude oil market fundamentals, IHS Markit has revised its projections and now expects that total natural gas processed from the Permian for the recovery of NGLs will increase from 19.96 Bcf/d in 2022 to 24.65 Bcf/d in 2026, compared to our previous forecast of growth from 18.34 Bcf/d to 23.15 Bcf/d during the same period.

IHS Market estimates natural gas processing capacity additions based on our views of growth relative to existing and planned capacity. The revised forecast for natural gas processing indicates that 5.2 Bcf/d of additional capacity is needed by 2026, approximately 1 Bcf/d higher than previously projected by IHS Markit in October 2021. This need is above and beyond (1) the new capacity additions that have been announced and (2) the recent capacity relocations announced as follows:

These relocations, which are expected to offer significant savings compared to new build costs and the opportunity to bring additional capacity online quickly, are helping these midstream operators to meet the imminent capacity needs in the Permian Basin. 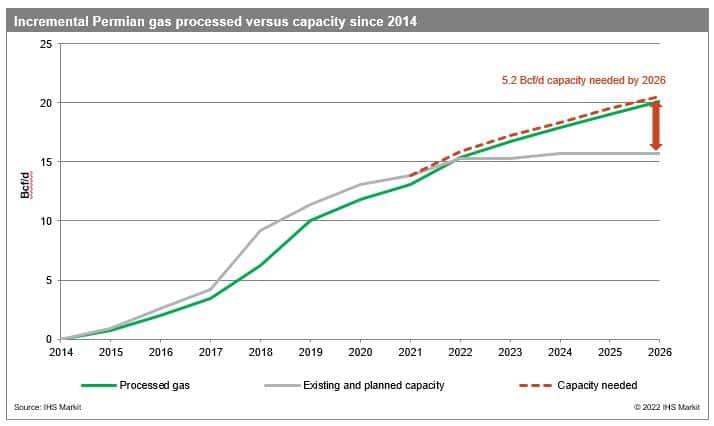 IHS Markit estimates that the new capacity additions will require about $6 billion in capex spending between 2022-2026, approximately over a billion over our previous estimate in October 2021, as shown in Figure 2. 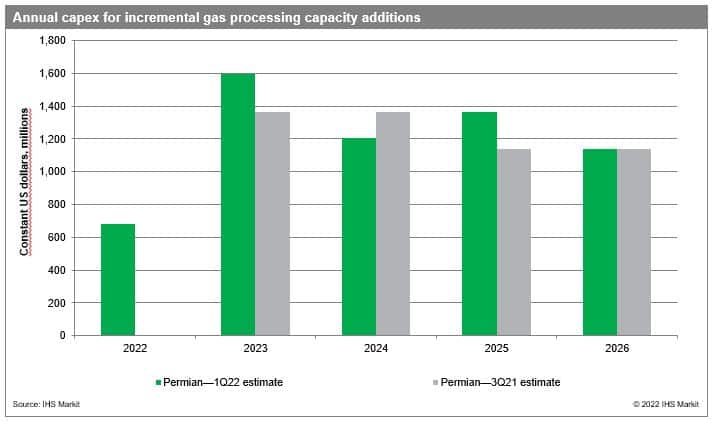 In summary, our revised projection on incremental capacity needs and capital spending over our October 2021 guidance follows the latest forecast for the increase in natural gas production and processed gas from the Permian, which will require capacity additions over and above what has been announced.