Permian Basin operators' ability to squeeze more production out of seemingly every well drilled, has made the Midland Wolfcamp section of the play one of the most prolific and economic in the country. But, recent analysis by IHS Markit suggests Permian drillers are likely approaching the limits of that productivity growth - at least with the current set of technologies.

This change marks an important inflection point for the play: as the chart below shows, on a per-lateral-foot basis, 2017 wells in the Midland Wolfcamp play showed virtually no improvement over the 2016 wells, after stellar gains of 28%, 30% and 24% in 2014, 2015 and 2016, respectively. 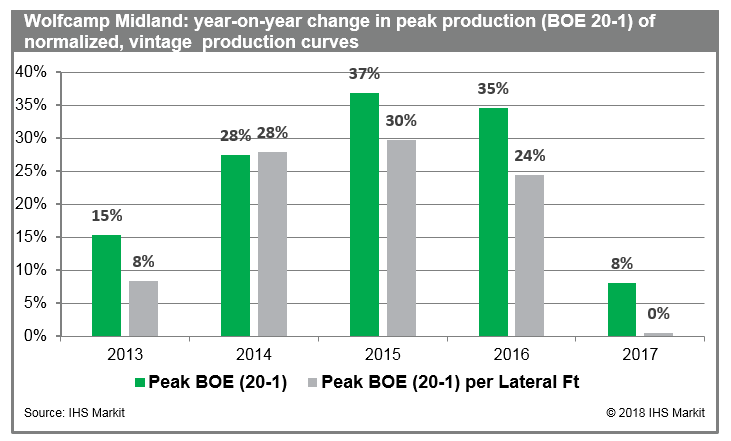 These trends are signals in a longer process of maturation and important signposts to understand upcoming inflection points in the Permian.

Losing the compounding benefits of increasing productivity will change the nature of the Midland Wolfcamp, creating a more linear relationship between production and activity/spending levels and making outperformance more difficult. In turn, this will also shift operator focus even more towards the pursuit of efficiencies and cost reductions to add value in the place of productivity gains.

However, through the end of the decade, a deceleration in well productivity will not alter the enormous growth potential of Permian oil and gas.

Productivity remains high, and estimated PV10 breakevens are around $40/bbl, making the play among the best options available globally. In addition, operators have more room to run: we forecast the performance of 2018 wells will improve on average by 6% versus 2017 across the quality spectrum.

This progress arises from a combination of adoption of leading edge best practices and a modest 3% gain in lateral length. Individual players may fare better or worse, of course, as may different neighborhoods of acreage.