Permian basin development is complicated by many technical factors. In addition to complex geology, operators must deal with very high levels of produced water. Produced water cuts in the Permian range from 30% to 90%, whereas in the Eagle Ford they are more on the order of only 30%.

The Permian basin is one of the larger and more structurally complex regions in the United States. The Permian's Midland and Delaware sub-basins share characteristics like age and lithology, but with many important differences, in both sedimentary deposition and tectonics, that initiated stratigraphic discontinuities between them.

The Midland basin was largely filled through an accumulation of clastic sediment that formed a thick subaqueous deltaic system covered with floodplains. This mechanism has tended to make its composition somewhat more homogeneous than the Delaware. Furthermore, it is neither as deep nor as thick, as the Delaware. The Midland Wolfcamp and Spraberry formations range from 6,000' to 10,000' deep and are only about 1,000' thick but may have as many as four possible benches, or horizons. It is these stacked reservoirs that make the Permian so attractive by enabling cost-efficient, multi-bench drilling. However, these layers can also contribute to significant water production - a complication that adds cost and reduces well productivity.

The Delaware sub-basin was a structural and topographical low that provided an open marine depositional environment. It was filled with sedimentation that was received from the surrounding coastal plains, making it more heterogeneous. It became host to reefs built by sponges, algae, and microbial organisms, promoting carbonate buildup with areas separating shallow and deep water deposits. The Wolfcamp Delaware and Bone Spring producing zones are deeper reservoirs (i.e. 7,000'-12,000') but also thicker (i.e. 3,500') leading to higher well costs, but also greater productivity. Water production can again be very significant. 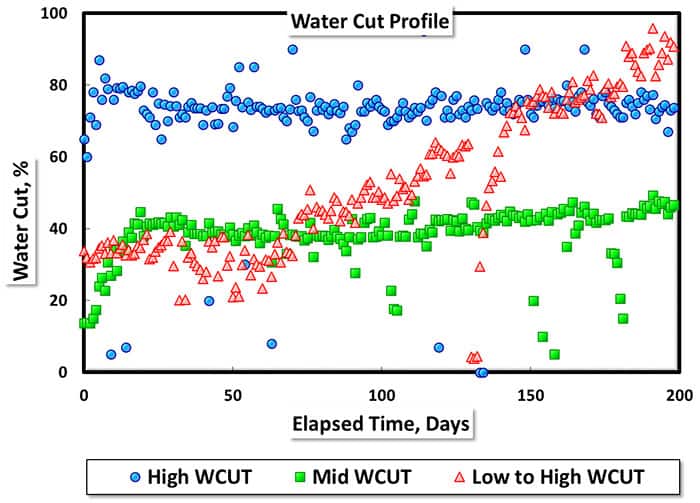 In order to understand the root cause of wide variations in Permian basin produced water cuts, we studied a horizontal multi fractured well that was drilled and completed in the Wolfcamp formation.

The initial water saturation at the target well location was in the range of 30 to 40%. Therefore, without consideration to production data, we would expect this well to produce at a maximum water cut of about 40%. However, the well exhibited a "High WCUT" profile with a produced water cut of 85% over the course of its production.

The next step of our study was to build a multi-layer numerical simulation model, from proprietary IHS Energy databases, including 250,000 Permian basin wells, a Permian geological static model, and computational modifications to incorporate reservoir, rock-fluid, and fracture properties, enabling us to calibrate our model to match the Permian well production data.

We tested several different theories and factors but ultimately, through considerable "hypothesis-led" trial and error, we were able to develop an excellent match to actual oil, gas and water production by incorporating fracture height into our model. Given the relative thinness of the Permian, and its multiple benches or horizons (discussed previously), we find there to be an intuitive comfort with these results. 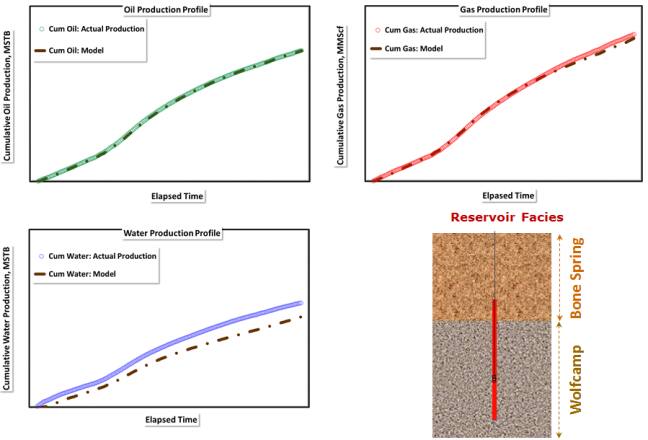 Fracture height was the single most important determinant in getting our model to match the empirical data for water production. As per model results, elevated or rising water cut was the result of fractures propagating from the Wolfcamp into the Bone Spring Formation. Interestingly, we also observed that fracture height is an important determinant in both vertical and horizontal well spacing.

Watch for part two in our series coming soon!