Strong sales numbers cover up the differing fortunes of urban and rural India.

Passenger vehicle sales in India expanded by 6.3% year on year (y/y) during May to 231,640 units, according to data released by the Society of Indian Automobile Manufacturers (SIAM). Monthly volumes were led by cars, which sold 158,996 units, although this equated to a decline of 0.9% y/y. In contrast, utility vehicle sales surged 35.9% y/y to 58,793 units. Shipments of vans declined by 3.4% y/y to 13,851 units. The strong May performance helped passenger vehicle sales for the first five months of 2016 achieve a 4.9% y/y improvement to nearly 1.2 million units.

Total industry volumes (TIVs) during May rose 8.2% y/y to 288,729 units. TIVs for the first five months of 2016 were therefore up 7.5% y/y to 1.51 million units. It is worth highlighting that the sales figures reported by the SIAM represent dispatches by automakers to their dealers, rather than retail sales. 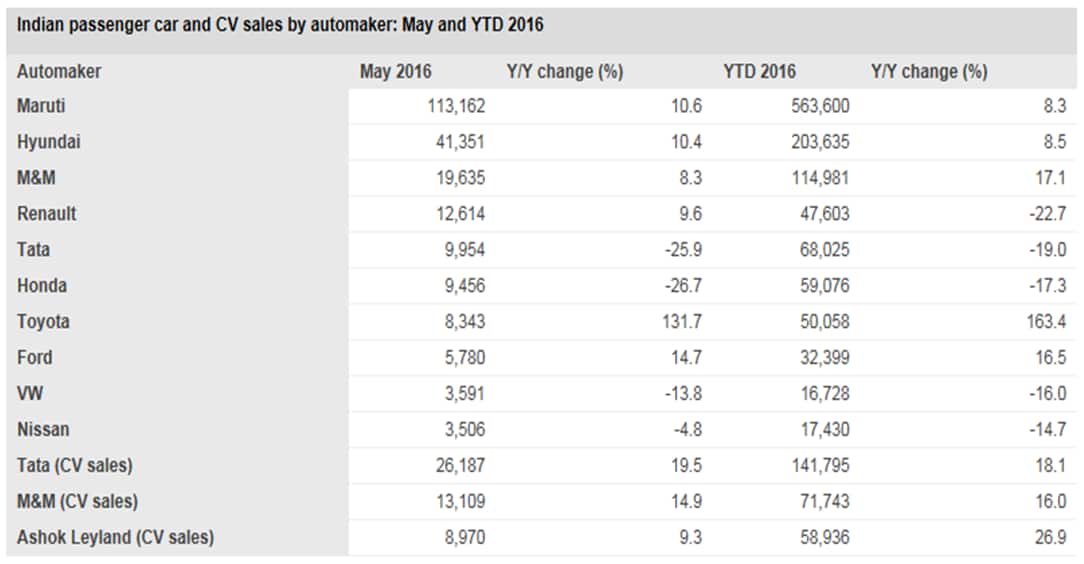 The Indian automotive industry once again turned in a solid sales performance in May, although growth moderated somewhat from April's double-digit percentage levels. Despite this moderation, the market remained robust considering the multitude of challenges currently facing the industry. Earlier this year, the government increased taxation on vehicles. Meanwhile, conditional bans on diesel vehicles in the National Capital Region (NCR) and Kerala have also not helped the industry.

The industry's challenges are leading to some prominent changes in the composition of the market. Following their decline in May, car sales have now been down in four of the first five months of this year. This dangerous trend is an indicator of two important trends currently under way in India. First, the growth in overall vehicle sales is primarily stemming from strong consumption in urban areas, where buyers are gradually moving away from hatchback and sedan bodystyles and embracing sport utility vehicles (SUVs). Nevertheless, automakers are continuing to target the former segments because of their large size. Second, the decline in car sales is also explained by the weakness in rural markets, where inexpensive hatchbacks are popular. Entry-level hatchbacks derive much of their volume from semi-urban and rural markets, but sales here have fallen considerably as a result of weak monsoon seasons in the past two years. Although the monsoon rains are expected to be above average this year, deficit rainfall for a third year could end up crippling sales of A-segment cars.

Meanwhile, irrespective of geography, diesel vehicles are fast losing buyers across India to their gasoline (petrol) siblings. This trend is more prominent in metropolitan markets where compact SUVs are attracting buyers from premium hatchbacks as well as from sedans. Sales for both Maruti Suzuki and Hyundai continue to be boosted by recently launched utility vehicles - the Vitara Brezza and Creta, respectively.

Despite the forecasts of better monsoon rains this year, challenges persist for the economy and therefore the automotive industry. The central bank's decision to lower its key lending rate by 25 basis points in early April was a welcome step, but it remains to be seen when the benefit of this will be passed on by commercial banks, which are battling high non-performing assets (NPAs). Meanwhile, a spike in oil prices could disrupt the central bank's policy of lowering interest rates and boosting demand. Considering this context, IHS Automotive has maintained its forecast for light-vehicle sales growth of 7.4% in India in 2016. As a result, we expect the market to register sales of 3.38 million units this year.