Pakistan's National Transmission and Dispatch Company (NTDC) released the Draft Indicative Generation and Capacity Expansion Plan 2047, within six months of the preceding plan. The emphasis of the Draft Plan remains on increasing the share of indigenous resources while reducing reliance on imported fuel. However, the new version of the capacity expansion plan seems overambitious and raises concerns over planning, project development, and financing among the stakeholders.

Of the various scenarios laid down in the draft plan; the base-case scenario, i.e., normal GDP growth (5.5%) scenario, envisages peak demand to grow at a yearly average of about 5.1%, reaching about 103 GW in fiscal year (FY) 2047. However, given the slowdown in economic activity and industrial demand, IHS Markit expects Pakistan's GDP to grow at a yearly average of only about 4% over 2019-47, and hence foresees risk to power demand growth. 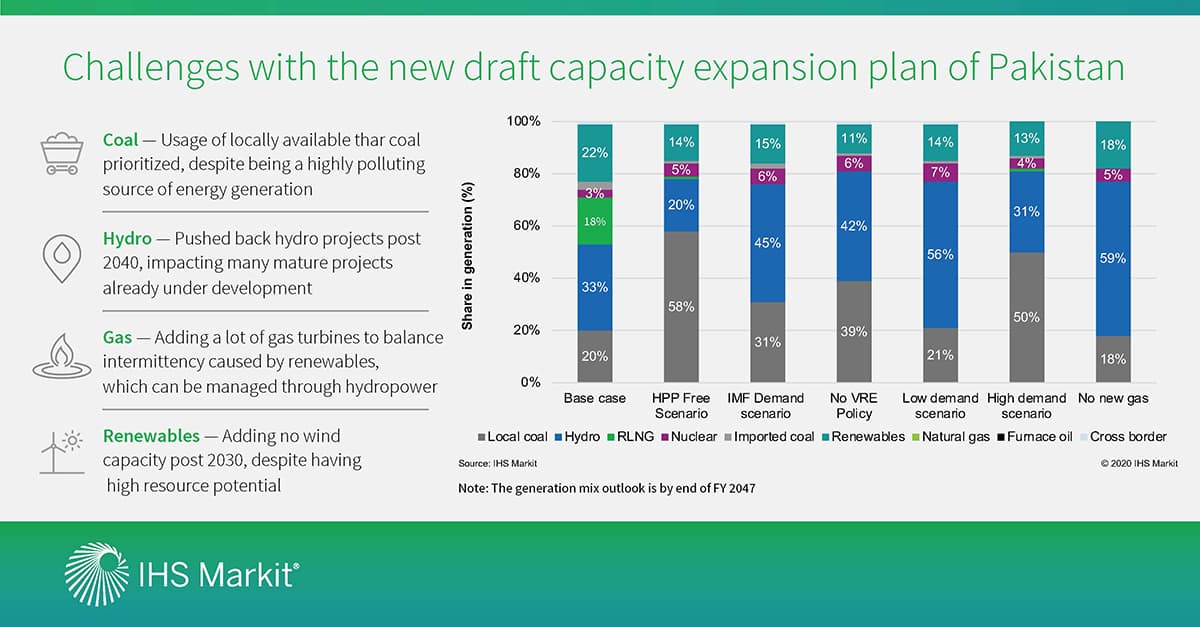 To reduce the dependence on imported fuel, the draft plan targets phasing out of oil and re-gasified LNG plants, lower utilization of the newly constructed imported coal-fired fleet, aggressive renewable capacity additions in the short-term and 55 GW of hydropower capacity additions by FY 2047. Also, to balance the intermittency of renewable plants, the Draft Plan proposes adding 25 GW of gas turbines operating at very low load factors (requiring a huge amount of investment). However, many hydropower projects that were in the advanced stages of development have been pushed back to 2040, impacting sentiments of active investors, further putting the projects at risk of facing unspecified commissioning delays.

As per IHS Markit forecast, Pakistan's capacity outlook is expected to be dominated by renewables, with an equivalent share of hydro, natural gas, and coal in the mix. Given the financial challenges and administrative delays, the capacity addition targets will be challenged as a result of lack of required infrastructure. In the short term, the renewable additions will happen at a slower pace than estimated in the Draft Plan and ARE 2019 policy. While; RLNG is likely to continue to play a significant role in Pakistan's energy mix, as opposed to the assumptions of the Draft Plan.

Learn more about power outlooks and research in the Asia-Pacific region.

Deeksha Wason is a senior power analyst with the Gas, Power, and Energy Futures team at IHS Markit, with expertise in the Indian power market.