Each has its own advantages and drawbacks. Higher-pixel resolution is important for tablet PC displays, but low-power consumption and superior screen performance are also important considerations. As a result, each tablet PC brand works with its main panel suppliers to find the best display possible.

For example, as we analyzed in the Tablet & Notebook Display Intelligence Service from IHS Markit, the Samsung Galaxy Tab uses OLED for a thin and light form factor, while Apple is shifting all its iPad-series tablets to oxide for lower driving frequency and better system stability. Meanwhile, lower-end tablet makers like Amazon are using a-Si for more economical costs.

Cost, in particular, is an important factor by which to judge the suitability of displays for tablet PCs. Assuming display specifications to be the same across the board, the consensus is that OLED is the most expensive, with LTPS costing more than oxide, and then oxide costing higher than a-Si.

The reasoning comes from process complexity. LTPS requires more photo masking in addition to some laser annealing and ion implantation processing, with equipment investment greater and yield-rate management tougher. In comparison, the a-Si TFT process is relatively simple, which explains why manufacturing costs are lowest. The catch, however, is that a-Si resolution, power consumption and performance are not as good as in LTPS. For its part, oxide sits somewhere in the middle between LTPS and a-Si.

That thinking and consensus is now changing in favor of oxide, in light of increased investments pouring into the technology and an improvement in oxide yield rates.

According to the latest cost simulation from the IHS Markit Smartphone and Tablet Display Cost Model report, the manufacturing cost for an oxide LCD module featuring 7-inch full-high-definition (FHD) for tablet PCs is estimated to be $19.50. Based on a consistent fab utilization of 90%, the cost is 4% lower than in an a-Si LCD display and 13% lower than in LTPS.

The performance benefits of oxide substrate LCDs over those of a-Si LCD displays are well known, especially when it comes to brightness and power consumption. However, this is the first time that the cost benefit to oxide is shown to match the technology's performance, especially oxide with the fewer masks required in the oxide manufacturing process along with an associated increase in Gen-8 fab plan availability.

As Apple moves its iPad products to oxide for benefits including lower driving frequency and reduced power consumption, oxide costs are projected to improve-thanks to iPad capacity shifts and the resulting expected higher utilization. 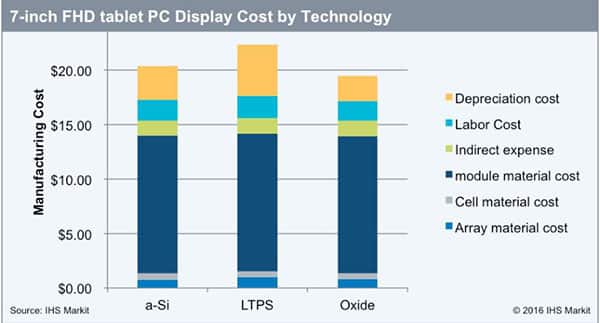