Overstock.com announced last Friday that it will report Q4 2018 earnings before markets open on March 18th. The current short interest is at the highest level recorded in terms of shares (16.7m), which equates to 68.7% of the free float. It is also the 4th most expensive US equity to borrow with at least $25m on loan. The shares are trading 75% below the all-time high of $86.9 per share, however the current share price $22 reflects a 70% rally from the 2018 low on Dec 13th. Bears may have gotten the better of the bulls over the last year, however short positions have been put under pressure by the rise in borrow costs along with the rally in share price year-to-date. 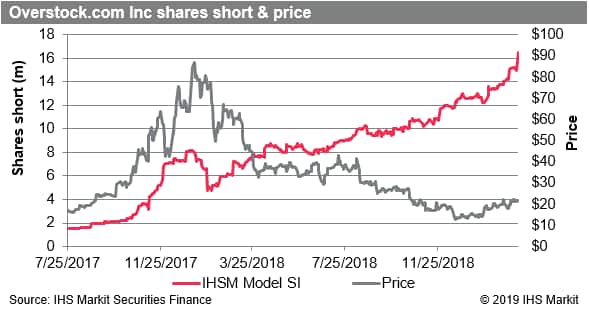 Historically, short sellers and Overstock.com have gone together like oil and vinegar - they don't mix very well - though there has been a recurring tendency for them to be shaken up together. The recent history began in the second half of 2017, when the spill-over from the crypto craze saw the price of OSTK increase 420% between the start of August and its peak on January 5th 2018. The bulls chanted that this wasn't really a crypto trade - insisting that the firm's blockchain related investments justified increases in valuation, regardless of the froth in the cryptocurrency space - while the firm's legacy retail business presented an inexpensive call option on any potential spin-off or sale.

The short position in Overstock shares started to meaningfully increase in October 2017, reaching 8.2m shares in early January 2018 just before the share price reached its all-time high. After dipping slightly below 5m shares in late January of that year, the share price descent accelerated, and short sellers consistently added to the short position in share terms. The current short position is over 16m shares for the first time on record, however the peak percentage of float was over 80%, observed in 2006. 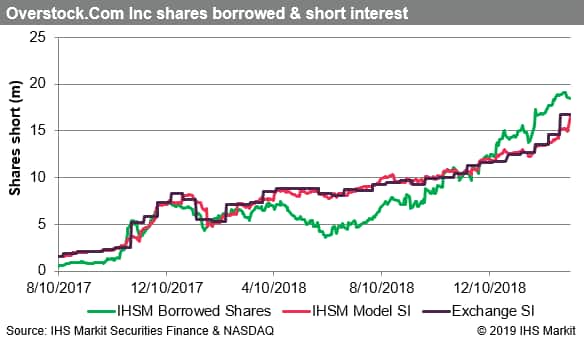 The increase in shorting required a corresponding increase in the borrowing of shares in order to settle the short sales. Securities finance traders received a jolt on January 28th as the cost for new borrows increased five-fold overnight. Those transactions were reported intraday to IHS Markit, allowing market participants to react in real-time. The annualized cost for new borrows reached a new high on March 7th, more than 30% annualized fee. The average for all currently open borrows is lower, but has trended in the same direction, given that millions of shares in borrow transactions have been re-rated daily in recent weeks. 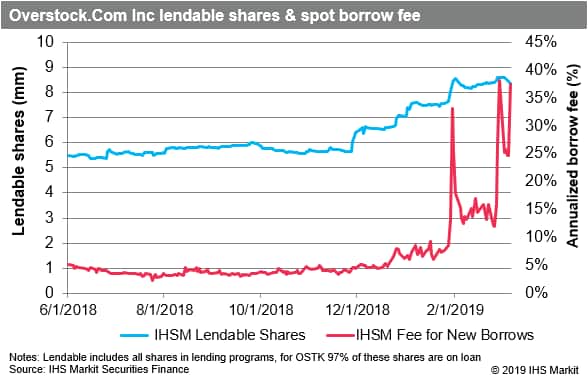 There were a few early indications last year that borrow costs were likely to flair, apart from the general increase in short positioning. Firstly, a greater portion of the supply of lendable shares from institutional holders was being borrowed, even though the pool of lendable shares was increasing. Seeing utilization of lendable shares reach 80% in November for the first time since the first week of January was an early indication that the borrow was tightening. There are currently 26% of shares outstanding included in lendable shares, which is a record for OSTK, but still in typical range for similarly sized US equities.

The 2nd signal was the increase in borrows in early December which pushed total borrows past the total short interest reported to by NASDAQ. Prime brokers are usually able to source some amount of the borrow internally, for example rehypothecating hedge fund long positions. Seeing borrows approach and then exceed the exchange reported SI number was an indication that brokers were limited in ability to internalize marginal borrow demand. Taken together with increasing utilization, the tightening of borrow was clearly reflected by the start of December, at which time the fee for marginal borrows was roughly 1/10th the current level. 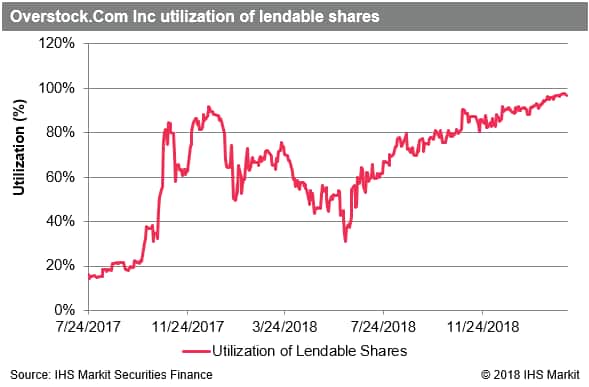 While the borrow cost has ratcheted up pressure on short sellers, context is important. Since short interest has only gone up, calculating a rough estimate of profit and loss is reasonably straightforward, notwithstanding that individual short sellers may have come and gone while the overall short position has grown. Multiplying the daily short balance by the daily percent change in price returns a daily profit and loss, which can be summed with the daily financing charge to arrive at a daily profit and loss, net of borrowing costs. Since the start of August 2017, the estimated short P&L is a profit of $240m; the result of a $280m profit from the price decline, netted against $40m in borrow costs. In nominal terms the short position peaked with the share price in January 2018 at $575m, however the current short balance is still over $400m.

An element from the Q3 earnings call which may be notable to short sellers was CEO Patrick Byrne's response to whether he suspected any "mischief" on the part of short sellers which would have had a recent impact on the share price. Mr. Bryne's brief response, which included a reference to the high level of short interest, generally suggested that he didn't believe that foul play on the short side was a significant factor on the current share price. After responding, he immediately jumped into a discussion of upcoming plans to sell the retail franchise and, failing that, to spin off the T-Zero business as a tax-free dividend when it becomes eligible (13 months from time of the call, 8 months from present).

The implication of that comment for short sellers could be significant, in that a spin-off of the T-Zero franchise could have ramifications for the ability of shorts to borrow shares. Typically, if a firm spins-off a business, a short-seller effectively becomes short the spun off shares in addition to their original position against the divesting firm and is therefore is responsible for returning both securities to close the positions. Short sellers may be happy to be short OSTK as a whole or via component parts, however issues could arise if long holders decide to sell the spun-off security, which would require that it be returned. For example, index funds would likely need to sell the spun-off security, given that it would not be a constituent in the reference index. Similarly, the sale of the retail business could force short sellers to pay a cash dividend or to buy shares of an acquiring firm to close a position. That could also destabilize the borrow, given the general preference for shareholders to receive dividends directly from the firm as opposed to short seller who has borrowed their shares (the latter having a larger tax burden given that it is not a qualified dividend). There is also a pending sale of an interest in T-Zero to investor GSR, which is less likely to have a direct impact on borrowers of shares but would nonetheless be a positive indication for the standalone value of the business.

There may eventually be headaches for short sellers resulting from sale of the retail business or eventual spin-off of T-Zero, however the short-run catalyst is the earnings announcement and management call on March 18th. Short sellers have exhibited a willingness to pay higher borrow fees to stay in the position, suggesting strong conviction despite the recent rally. Heightened borrow fees often attract marginal supply of shares from holders seeking the additional return of lending revenues, however that was not the case last week, as total lendable shares fell by 200k while fees shot higher. That suggests that tightness in borrow supply is likely to persist.

There's been no shortage of pain for long holders over this past year, though currently, they are enjoying a share price rally along with increasing realized returns from lending their holdings. While the future course of the share price and borrow fee is unknowable, there's no indication that the borrow fees will decline in the short run. Typically, expensive to borrow equities underperform relative to stocks which are easy to borrow, however in this instance, longs and shorts would likely agree that Overstock.com and its CEO are anything but typical.