Opposition to extractive industry in Colombia

On 1 October, the municipality of Sucre, Santander department, held a popular consultation on whether to allow mining and hydrocarbon activities within the municipality. More than 98% of voters voted "No". Seven other municipalities across the country have held similar referenda, with voters in all cases voting no. According to the Ministry of Mines and Energy, there are more than 40 further referenda planned across the country. Although the entire list has not been made public, the map below is based on data from local press reports and those scheduled with the National Electoral Council (CNE). 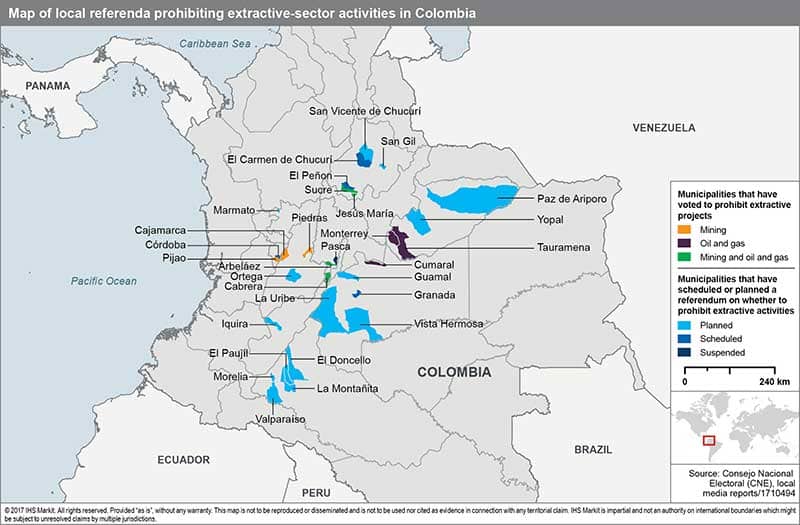 Several judicial rulings over the last two years have contributed to the legal uncertainty facing extractive projects. In May 2016, the constitutional court overturned an article in the mining code prohibiting municipalities from restricting mining activities. This ruling was followed by another in August 2016 that affirmed the competence of municipalities to hold referenda on extractive industries. In March 2017, the constitutional court provided further clarification on its position via SU-133, a 'Unification of Jurisprudence' sentence aimed at clarifying previous court rulings. SU-133 stated that local communities had the right to be consulted on extractive projects, which went beyond previous rulings allowing local authorities to decide on mining projects within their jurisdiction. It was not specified whether the referendum result was binding.

In May 2017, the legal position established over the last two years was tested by Mansarover Energy, which presented a legal challenge to a referendum on hydrocarbon activities in the municipality of Cumaral, Meta department. The Council of State ruled that the referendum result - a decisive 'No' - was definitive and obligatory and should be incorporated into law through the publication of new regulations. The Council also ruled that projects approved under a previous regulatory framework cannot be retrospectively cancelled or amended, as this would undermine legal stability. The ruling leaves an underlying contradiction between the rights of local communities and local authorities to allow or prohibit projects that affect their community or fall within their jurisdiction on the one side, and the need for contractual sanctity.

In April 2017, AngloGold Ashanti announced it was unilaterally suspending all activity and investment in the La Colosa Gold mining project in the municipality of Cajamarca, Tolima department. The firm took this decision approximately one month after Cajamarca's residents participated in a local referendum on mining activity in which 97% of voters opted to ban any extractive projects from operating in the area. During the past decade, AGA had invested approximately USD365 million in preparatory activities at La Colosa, and planned to invest a further USD2.5 billion. It has not yet announced whether it will seek legal recourse. The company cited adverse institutional, political, and social conditions, including reference to the referendum, in its decision to suspend the project. The Colombian Mining Association (Asociación Colombiana de Minería) warned in September 2017 that investment in the sector could fall from USD1.5 billion to USD800 million in 2017 as a result of legal uncertainty.

In the municipality of San Gil, Santander department, locals are proposing a referendum to oppose the development of the Piedra del Sol hydropower project, owned by Canadian firm Brookfield. In the municipality of Marmato, Caldas department, a proposed referendum aims to halt the mining activities of Canada's Gran Colombia Gold Corporation. In the hydrocarbon sector, several firms have acquired resources in municipalities that have voted against permitting extractive activities. In addition to Mansarover Energy, which faces uncertainty as a result of the 'No' vote in Cumaral, Australian Drilling Associates and Alange Energy both have blocks in the municipality of Arbeláez, Cundinamarca department, which voted against hydrocarbon activities in July 2017.

The government has struggled to keep up with the various rulings of the constitutional court and council of state. The government has repeatedly denied that the referenda are binding or can be applied retroactively. Luis Guillermo Velez, head of the Agencia Juridica para la Defensa del Estado, the government agency in charge of responding to lawsuits against the state, outlined the government's legal position in July, arguing the referenda had no legal basis and were unenforceable. The assertion remains at odds with the various rulings made in the last two years and will be tested in the courts. Ultimately, the government will have to legislate to regulate the use of referenda while also resolving the competing jurisdiction between local and national authorities in order to supersede judicial rulings.

The government's hope to restrict the use of local referenda to reject extractive activities was part of political participation reform legislation planned in the context of the peace agreement reached with the Fuerzas Armadas Revolucionarias de Colombia (FARC). However, the FARC are resisting this. With legislative elections scheduled for March 2018, a presidential election in May 2018, and a busy legislative schedule dominated by the introduction of implementing legislation supporting the peace agreement, the government has limited scope to embark on major reforms to restrict local authority and local community rights. A non-legislative solution promoted currently being promoted by the government is the use of sustainable development agreements between extractive firms and local communities. The National Mining Agency (Agencia Nacional de Minería) claimed in early October that 127 municipalities had entered such agreements across the country.

As the number of communities planning referenda accelerates, an increasing number of extractive projects or potential investments will be subject to the legal uncertainty generated by the ongoing contradictions in Colombia's legal framework. With limited prospects of a legislative solution before legislative and presidential elections, this is likely to continue at least through 2018. Although still untested, there remains a possibility that central government-approved projects will face court ordered suspensions if they are developed within municipalities that have voted to prohibit extractive-sector projects. Sustainable development agreements have been successful in dampening community demands for referenda, but involve greater levels of community spending and project compromise in areas such as environmental protection, local content and recruitment, and water use than are necessarily spent under the normal regulatory framework. A major indicator of a further rise in legal risk will be if a test case rules that community rights can be applied retrospectively, putting hundreds of mining and hydrocarbon projects at risk of suspension or extortion from local communities threatening to prohibit projects. The speed at which the legal uncertainty is likely to be remedied will largely depend on the outcome of the 2018 elections. The Radical Change (Cambio Radical: CR), Colombian Conservative Party (Partido Conservador Colombiano: PCC), and the Democratic Centre (Centro Democrático: CD) groups are the most likely to seek reform that reduces the rights of local communities and brings authority back to the central government. Liberal or left-of-centre parties such as the Green Alliance (Alianza Verde: AV), Colombian Liberal Party (Partido Liberal Colombiano: PLC), and Alternative Democratice Pole (Polo Democrático Alternativo: PDA) are likely to be more hesitant.