Seaborne crude oil shipments by the OPEC+ group rose in September without busting the agreed ceiling as some members looked to the export market in the face of declining domestic refinery runs while others struggled to hold back output.

OPEC members shipped out 18.2 million b/d, up from the 17.53 million b/d exported in August, data from IHS Markit Commodities at Sea. Shipments from the biggest plus member, Russia, rose modestly to 3.59 million b/d from 3.52 million b/d in the face of a drop in local demand. 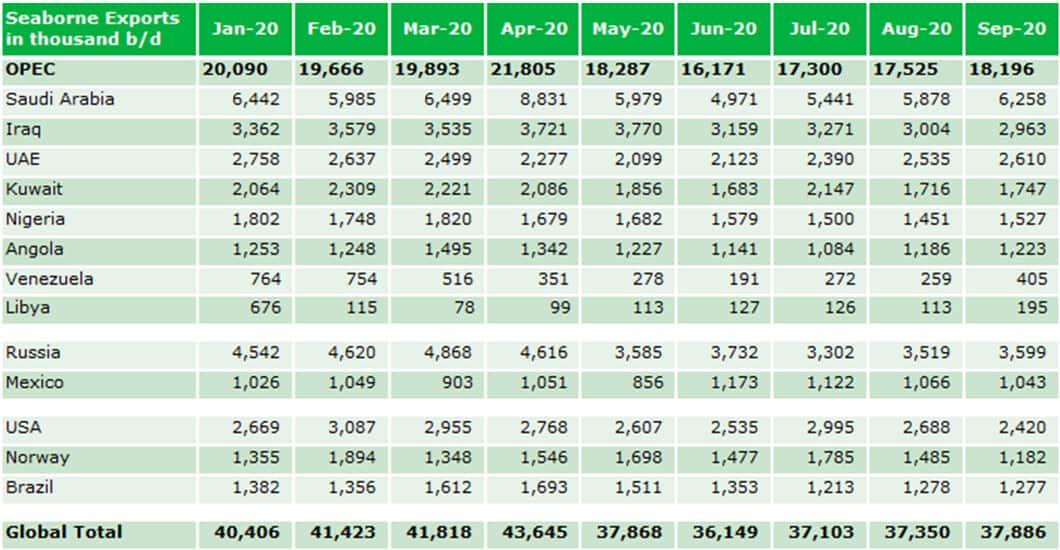 As a group the Vienna Alliance exported more than 22.84 million b/d in September versus 22.11 million b/d in August. This should put the group within their target after securing a 102% compliance for the previous month, according to a report prepared by the group's Joint Technical Committee.

On the other hand, exports from Brazil, US and Norway, the biggest non-OPEC+ producers, fell sharply due to various reasons including FPSO maintenance, tropical storms and voluntary cuts, with shipments falling to 4.88 million b/d from 5.45 million b/d, which is the lowest the three countries have exported as a group so far this year.

The unexpected large output reduction from the bigger non-OPEC+ countries was a much needed boon for producers as a resurgence of COVID-19 cases in several parts of the world brought demand concerns back into focus, which until recently was enjoying a purple patch as social distancing measures were scaled back.

However, fresh outbreaks and unrelenting spread of the virus in countries such as India have dented hopes of a sustained demand recovery leading to a pullback in crude oil prices. Brent crude futures, for example, reached a high of $46.05/bbl on August 25 before falling below $40/bbl in early September, closing at $39.69/bbl on September 16. It has since then traded in the low $40s/bbl.

The uncertainties surrounding demand mean that OPEC+ must keep a close eye on output and ensure that members do not breach their quota as new challenges emerge such as the restart of production in Libya. Saudi Arabia and Russia, the group's two biggest producers, are leading by example and have been absolutely resolute in ensuring compliance.

The UAE, a key ally of Saudi Arabia, surprisingly breached its quota pumping extra volumes into the market in August and September but has since then announced a 30% cut to trim loadings in October and a 25% drop in November, with sources saying a similar reduction is likely in December.

Commodities at Sea data show shipments in August and September at 2.54 million b/d and 2.61 million b/d, which are a lot more than the around 2.1 million b/d exported in May and June. 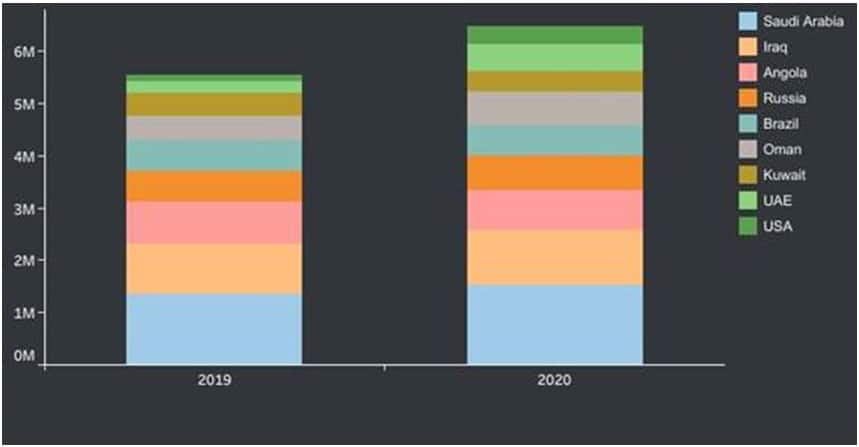 Saudi Arabia's crude oil exports have recovered from their lowest level observed in June as the Kingdom ended voluntary cuts that have been in place since May. State-run Saudi Aramco cut its October official selling price (OSP) for Arab Light to all destinations as the producer fought back to ensure that it did not lose market share to competitive arbitrage barrels amid declining refining margins.

Saudi Arabian exports returned to levels above 6.25 million b/d in September, close to levels last observed in March 2020, before the massive increase in April following a breakdown in OPEC+ talks to reign in production. In the first nine months of 2020, Saudi Arabia exported an average 6.25 million b/d, almost unchanged from the same period last year.

However, it's interesting to highlight that shipments from Saudi Arabia to China have increased by 19% from a year ago to an average 1.48 million b/d so far this year. China now accounts for almost a quarter of Saudi Arabia exports. This appetite from China, partly due to the building of commercial and strategic inventories, helped offset declining flows to other countries, including Japan, where the industry is facing an existential challenge. Flows to Japan are down 18% so far in 2020 vs 2019.

Focusing on the second-biggest Middle East OPEC members, exports from Iraq increased only marginally in September at 3.1 million b/d after it reined in shipments heavily since August on the back of a rebuke from Saudi Arabia and Russia. Iraq had shipped 3.77 million b/d in May and in these two months took great effort to compensate for the overproduction, slashing output by about 400,000 b/d. It is back to producing at quota levels and has been offering more October loading barrels as a result, which has also dampened its crude grades slightly in recent weeks. Premiums for Basrah Light, for example, dropped to around $0.30-$0.40/bbl from about $0.60-$0.70/bbl last month.

Crude oil exports from Nigeria, Angola and the rest of West Africa have only marginally increased but remain within quotas agreed with OPEC. However, the majority of Nigerian crudes are facing a lot more issues finding a home due to their high gasoline and middle distillate content, which at the moment is not hugely in demand.

Heavy-sweet crudes are easier to place as the demand for marine fuels remains stable amid strong demand for high-sulfur fuel oil from the Middle East during the peak summer months. Naphtha-rich grades are also popular due to strong petrochemical interest.

Nigeria reduced its OSPs for successive months as the crudes, which generally trade at a premium to Dated Brent, were priced at a discount to the benchmark.

The October OSP for key grades such as Bonny Light and Qua Iboe were set at Dated minus $0.37/bbl and $0.56/bbl, respectively, down from plus $0.20/bbl and $0.16/bbl in September in the face of scant demand amid competitively priced Middle East barrels where Saudi Aramco made hefty cuts to its term prices.

Rebalancing global oil prices is a challenging task for OPEC+ in the wake of the demand uncertainty. The Alliance recently relaxed its production cuts by two million b/d, but the market is facing difficulty absorbing the additional volumes in parallel with the ongoing COVID-19 pandemic.

A new twist comes in the form of returning Libyan output after a blockade that was in place for much of this year was lifted. The National Oil Co. (NOC) plans to increase production to 260,000 b/d this week from around 100,000 b/d when the barriers were in place. Production will be pushed yet higher once more oilfields start operating again but the scale of damage caused by the months of fighting remains unclear. IHS Markit expects output to likely rise to at least 400,000 b/d in the coming weeks and potentially higher compared with the near 1.2 million b/d pumped prior to the blockade. Libya has already shipped at least two cargoes from storage tanks, or close to 200,000 b/d in the past week.

However, the key Ras Lanuf and Es Sider ports remain under force majeure, according to NOC, while export terminals in the east have been cleared. Depending on how quickly Libya is able to ramp up production is the big question. At current forecast levels of 300,000-400,000 b/d, it is not likely to cause too much concern to OPEC+, whose focus is on compliance and compensation.