For the first time since early 2015, German GDP growth turned negative at -0.2% quarter on quarter (q/q) in Q3. This compares with fairly steady growth of around 0.5% during the five preceding quarters and an average of also 0.5% since mid-2013.

This can be explained partly by a slowdown in global demand, owing to US protectionism, US monetary policy tightening, and Brexit related uncertainty. This has clearly dampened German exports and investment this year. In addition, the 25% increase in oil prices between April and early October has hurt consumer spending.

Nevertheless, the magnitude of the latest worsening of Germany's growth performance has surprised, given the ongoing support from a construction industry operating at capacity limits, a continually improving labor market, and above-average wage and pension increases. The explanation is found with one-off technical factors, namely a technically induced temporary reduction in car production and hampered delivery of key commodities by river due to this year's drought.

The role of the car industry

In September 2017, the EU introduced a new, globally harmonized emission test procedure called WLTP (Worldwide Harmonized Light Vehicles Test Procedure). Following a deadline of 1 September 2018, it was no longer allowed to register any cars for which the test for that specific model had not been conducted yet. Unfortunately, technicians at German car manufacturers have been kept very busy in recent years with issues related to the "dieselgate" scandal (hiding of above-limit emissions). This means that not enough resources were devoted towards timely execution of these WLTP tests, which are both numerous (Volkswagen alone had to certify some 260 different combinations of engines and gear boxes) and more time-intensive than the previous test methods.

Car manufacturers thus had to "artificially" reduce their car production in Q3 for sheer lack of parking space for cars they would not be able to sell after 1 September because customers (domestic or foreign) would not be allowed to register uncertified cars. This is despite efforts to find extra parking space, e.g. VW put almost 10,000 cars on the tarmac of the new Berlin airport still under construction. In the coming months, as certification progresses and production activity returns to full capacity, this effect will gradually unwind - probably until late Q1 2019.

GDP deterioration from 0.5% q/q Q2 to -0.2% in Q3 was also helped by German vehicle tax being linked to the level of CO2 emissions. The WLTP produces higher CO2 results because the test procedure is more closely aligned to everyday driving conditions than the old procedure, where manufacturers had much more leeway to manipulate. Consumers were thus keen to register a new car before 1 September. Considering the usual delivery times, consumers ordered at an above-average pace during Q2 already - as vindicated by the surge in registrations during July-August. Car output in Q2 was therefore higher than it would have been in the absence of the WLTP issue, exacerbating the drop in Q3.

The weight of the automobile sector in Germany's producing sector is about 15%, along with "other transport equipment" even 17%. Hence the production drop in Q3 by 7.4% q/q hurts Germany's total gross value added and thus GDP by slightly above 0.3%. It is sometimes argued there should be additional supply-chain effects, given that "autos + other transport equipment" utilize inputs that represent about 20% of Germany's manufacturing sector. However, this would only exacerbate matters if the fall in deliveries from suppliers is accompanied by disruptions (e.g. layoffs) that go beyond reduced sales to the car manufacturers - inputs into other end products are not counted a second time for GDP. That said, with "autos + other transport equipment" making up some 16% of Germany's merchandise exports, potential foreign customers may have turned elsewhere given foreseeable long delivery delays. Overall, the depressing effect of this technical distortion in the automobile sector on GDP was roughly 0.4%. 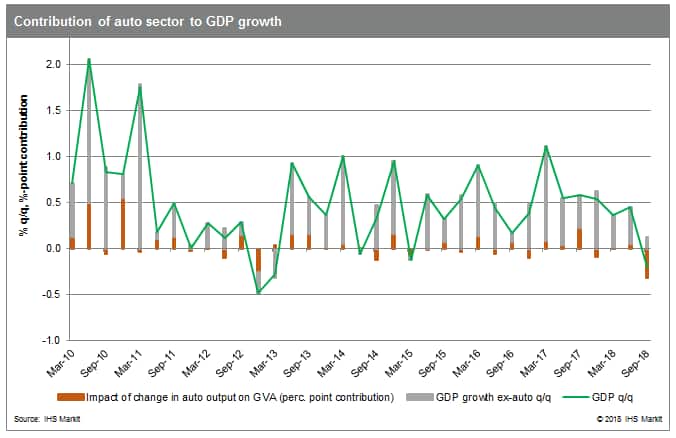 Disruptions caused by low water levels on the Rhine

Another factor that has played a role (and persists in Q4) is the low water level on Germany's rivers due to the drought this year. This pertains especially to the Rhine and its tributaries, as many commodities used especially by the chemical sector are being transported in bulk by barge. In recent months, barges could either load only a fraction of their usual volume or not move at all, and alternatives such as trucks and trains cannot fully compensate. Output of chemical and pharmaceutical firms in particular has therefore also been restrained since August.

The above-mentioned factors probably accounted for 0.4-0.5 percentage points in lost GDP growth between Q2 and Q3, which compares to an overall worsening by 0.65 points. This will lead to an offsetting rebound in the two subsequent quarters - not just in Q4, as some of the depressing forces were still ongoing in October-November. With underlying growth momentum probably at around 0.3% q/q at present, quarterly German headline growth is likely to be in the region of 0.5-0.6% q/q in the final quarter of 2018 and the first quarter of 2019 - the latter also helped by fiscal loosening.

The economy probably won't reach its pre-virus peak until 2022, primarily because the @LifeSciInsights believes an… https://t.co/6Wh75EAKRP

Our Chief US Economist @Newsweek "there is a very wide range of estimates about how strong the third quarter is goi… https://t.co/7ysxTfUPUY

Real consumer spending fell 7.3% in March in the most abrupt contraction on record, and retail sales declined in ca… https://t.co/eeyRV1LZiw