One reason for Toyota's green image

If one accepts the theory that customer perceptions of automobile makes are influenced at least in part by what customers see on the road, then it is easy to understand why Toyota is perceived as an environmentally friendly, "green" car brand. As shown on the nearby table, Toyota has dominated the U.S. hybrid market for so many years that the number of hybrid Toyotas on the road far out-distances those of any other make.

The last fact listed above means that more than nine out of every 10 vehicles on the road (which are recognized as hybrids because of their unique designs) are Prii, strengthening the link in drivers' minds between Prius, Toyota and hybrid technology.

Looking ahead, all automotive forecasts say the industry will move towards smaller and more fuel-efficient vehicles, which should work in favor of Toyota because of its established image as a fuel-efficient make. And, with its strong customer loyalty numbers, Toyota will be seeing many more returning hybrid drivers than its competitors. 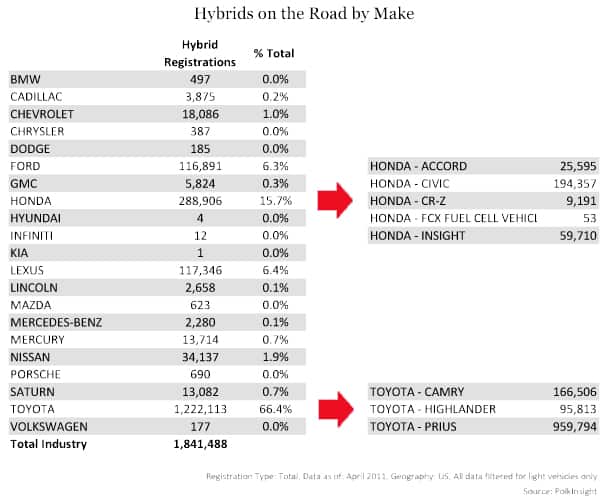 Attempting to understand the core, underlying drivers of the US new vehicle industry can be challenging. In a new w… https://t.co/VuSwYwE2fI