The pace of global economic growth slumped to a one-and-a-half year low in January as the Omicron wave disrupted activity across both manufacturing and services, subduing demand and causing widespread labour supply issues.

With COVID-19 cases falling in many major economies, and virus containment measures set to be scaled back, supply chains and labour market constraints are likely to act as diminishing drags on the economy in coming months. However, the outlook for demand growth remains uncertain. The demand recovery has already faded to the weakest since April 2020, with various headwinds threatening to subdue demand further.

Global economic growth slowed to an 18-month low at the start of 2022 as rising COVID-19 infection rates caused increased economic disruption. The JPMorgan Global PMI™ (compiled by IHS Markit), which tracks worldwide output across both manufacturing and service sectors, fell from 54.3 in December to 51.4 in January, its lowest since July 2020 and the second lowest seen during the recovery from the initial pandemic shutdowns of early 2020.

Compared with a pre-pandemic long-run average of 53.6, the latest reading signals below-trend annualised quarterly global GDP growth of just over 2% at the start of the first quarter, thereby pointing to a marked slowing in the rate of economic growth compared to late last year. 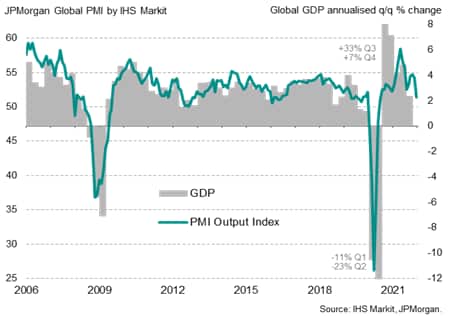 The weaker PMI data coincided with a flare-up of COVID-19 cases around the world, with record high new case numbers recorded notably in the US and Europe as well as in Japan. In many cases, these numbers are coming down again, though generally remain at elevated - often unprecedented - levels. 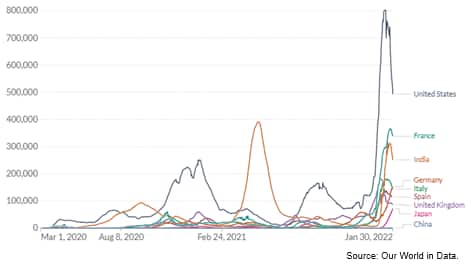 The rising COVID-19 case numbers had prompted a broad tightening of official measures to restrict the spread of the virus, as reflected in an increase in IHS Markit's Global COVID-19 Containment Index for a second month in January, thereby registering the tightest degree of protective measures implemented worldwide since May of last year. 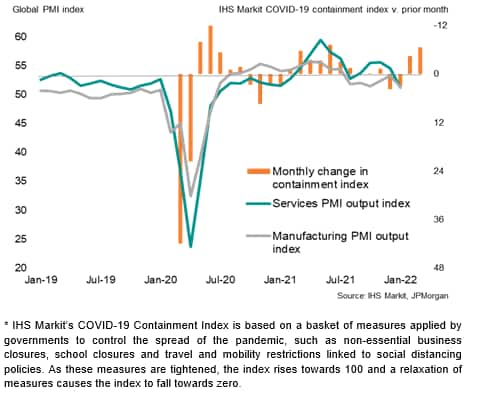 Substantially weaker rates of expansion were seen in both manufacturing and service sectors in January, each recording the smallest monthly improvements since July 2020.

These containment measures are set to ease on average globally again in February and March, which should help revive economic activity, though the path of the Omicron variant remains uncertain.

Developed world growth sank to an 18-month low in January, led by a near-stalling of service sector activity, though manufacturing remained more resilient (merely recording a slight slowdown). In contrast, the emerging markets reported a slight drop in manufacturing output - the first since last August - as well as a slowdown in the service sector, taking the overall rate of emerging market growth to its lowest since last August's downturn. 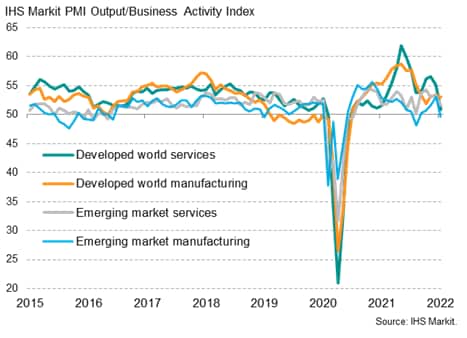 Looking at the developed world, trends varied somewhat, reflecting the timing of the Omicron wave and differing supply chain trends. An especially steep slowdown was seen in the US, where output in both manufacturing and services slowed to only very modest, near-stalling, rates of expansion. The month saw UK Omicron cases shoot higher and supply constraints worsen. Japan meanwhile suffered a marginal contraction of output, led by a marked downturn in service sector activity - which offset improved manufacturing output, signalling a nascent descent into its third downturn of the pandemic.

Growth over the eurozone as a whole meanwhile slowed to the weakest since the region's current upturn began in February of last year, likewise led by a weakened service sector. Manufacturing performance improved, however, linked mainly to an easing of supply bottlenecks. Spain was the hardest hit, sliding into decline, followed by Italy, where activity stagnated. However, business activity growth in Germany rose to a four-month high, rebounding from a mild decline seen in December. Similarly, growth picked up in the UK, albeit only modestly from the ten-month low seen in December.

The bucking of the downturn trends signalled in the UK and Germany provide some encouraging news, in that both countries saw an earlier spread of Omicron and already appear to be showing signs of reviving.

Output in the largest developed economies 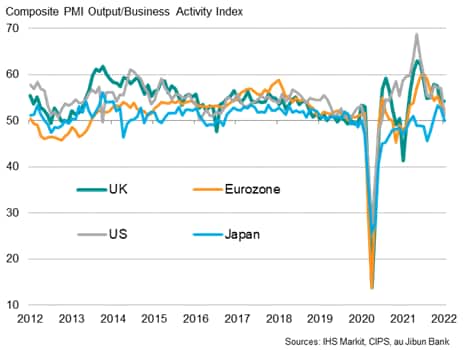 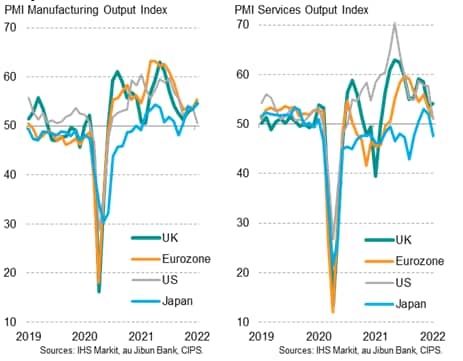 Looking at the world's largest emerging markets, the impact of the ongoing pandemic was evident across all four BRIC economies. The weakest performance was reported by Russia for the fifth successive month, with its economy once again stalled. However, both China and Brazil also reported near-stagnations of economic activity as growth rates deteriorated to five- and eight-month lows respectively, with both reporting especially marked downturns in manufacturing output.

While India led the emerging markets, its rate of expansion nonetheless waned to the slowest so far in its recovery from the Delta variant.

Output in the largest emerging markets 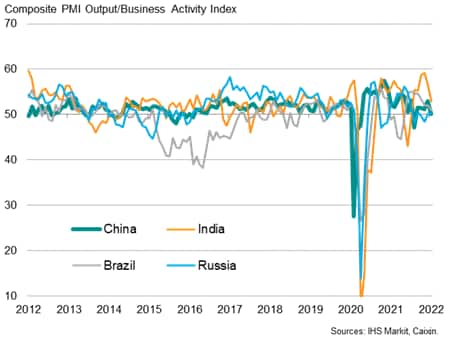 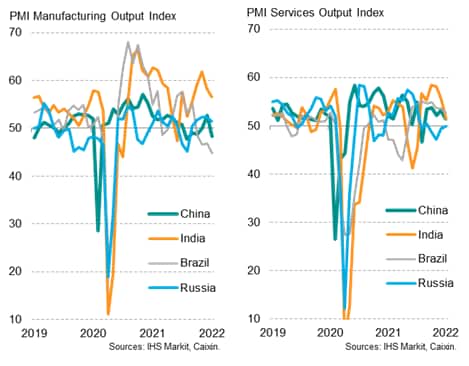 Output across both manufacturing and services was often constrained by ongoing supply chain delays. The number of companies worldwide reporting that output was constrained by materials shortages continued to run at 2.3 times the long-run average, a ratio above anything seen prior to the pandemic. However, this is down from a high of 3.4 back in last October, at the peak of the supply chain disruptions caused by the Delta variant.

The easing in the number of output constraints due to raw material shortages, despite the Omicron variant's surge, provides encouraging supply chain news, though clearly the overall situation remains one of supply chain delays limiting operating capacity.

Global companies reporting lower output due to shortages of materials 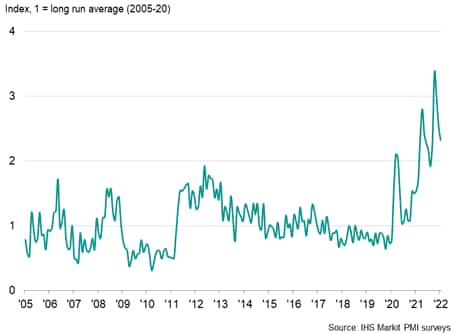 The easing of supply chain constraints nevertheless helped manufacturers contain the extent to which backlogs of work accumulated in January. The resulting overall global rise in backlogs of work was the slowest since February of last year, which also hints at an easing of the pandemic's supply crunch. 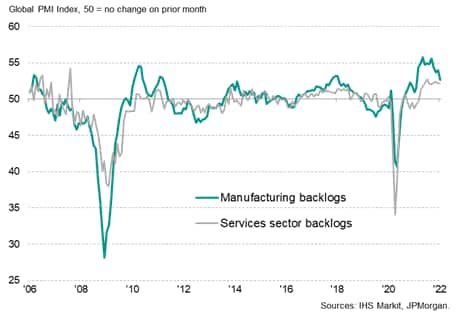 However, overall backlogs of work continued to rise in both manufacturing and services amid a spike in the number of companies reporting that output was constrained by shortages of staff. These shortages were in turn caused by a lack of available candidates to fill vacancies as well as absenteeism arising from increased virus cases, including from illness and self-isolation.

Only during the first COVID-19 wave had a higher number of companies reported output being constrained by staff shortages than recorded in January. 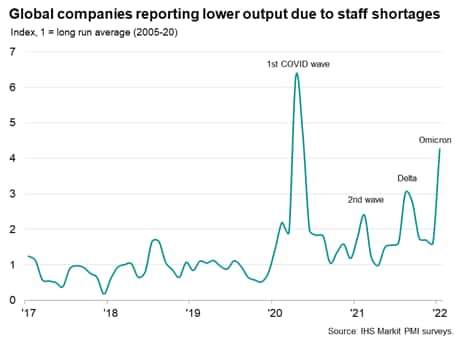 The January data therefore point to a further supply-side hit to the global economy at the start of the year, with rising labour shortages linked to Omicron exacerbating ongoing raw material shortages. However, with COVID-19 case numbers showing signs of falling in many economies, including the US and many European nations, the labour supply issue should prove less of a constraint in coming months.

Similarly, although remaining widespread, the supply shortage situation appears to be starting to improve. Even in the face of the Omicron wave, the average lengthening of supplier delivery times in January was the slowest recorded since last March.

Of particular note, the number of manufacturers reporting that delivery times had lengthened due to shipping-related delays - such as port congestion and a lack of containers (rather than suppliers being out of stock) - fell to the lowest since July of last year.

The expected relaxation of COVID-19 containment measures globally in February and March should meanwhile further help to alleviate both component and labour shortages.

More uncertain is the outlook for demand. Inflows of new business slowed globally in January to the weakest since February of last year. The new business index signalled weakening demand growth in both manufacturing and services. 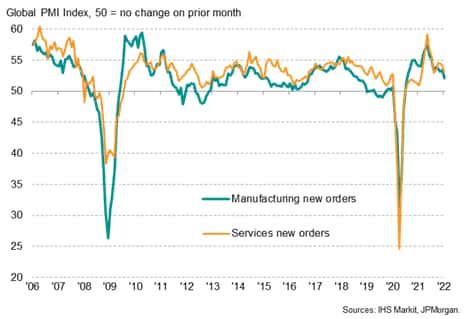 Part of the softer demand picture is likely to be temporary, resulting from reduced economic activity arising from the Omicron wave. As containment measures are lifted, demand should revive. However, it is important to note that the number of companies reporting higher orders due to a demand recovery has been on a marked downward trend since peaking early in the pandemic, falling in January to a level below the long-run trend for the first time since April 2020. 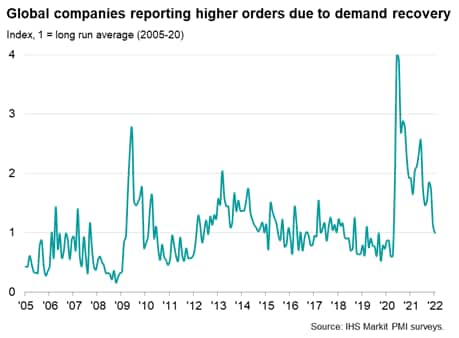 With an outlook for the supply squeeze to alleviate in coming months, the focus is likely to shift to the demand side, in order to ascertain the degree to which business and consumer spending will remain resilient in the face of numerous headwinds. These include de facto fiscal tightening as pandemic-related support schemes are wound down, as well as global monetary tightening, persistent high inflation and growing geopolitical concerns.

To monitor the supply side, the PMI suppliers' delivery times index and backlogs of work indices will provide timely insights into supplier performance and capacity utilisation.

To monitor the demand side, new orders indices and export order gauges from the PMI will provide early insights into changing spending patterns.