Oil sands growth to continue into next decade, but it will be different

IHS expects new projects will advance, driven forward by cost reductions and as prices recover. However, future growth in the oil sands will be different, focused primarily on expanding existing facilities.

Last year IHS released its projection that oil sands production growth would continue through to 2020, carried forward by the inertia of projects under development. However, in the absence of new projects moving into the construction phase, by 2018 all of the current inventory of projects under development will be complete and construction activity could cease. For growth to continue into the coming decade new projects are needed.

Costs have fallen in the oil sands. Lower activity has allowed producers' access to more efficient workers and equipment; companies have scoured their oil sands facilities for savings; operators have managed to boost utilization rates getting more oil from existing facilities and natural gas has become even cheaper since oil prices collapsed.

At the end of 2015 IHS Oil Sands Dialogue made public a report 'Oil sands cost and competitiveness' that estimated the scale of cost reductions in the industry. In it, IHS estimated that the cost to construct and operate a new oil sands facility had fallen by about $10/bbl since 2014. By the end of 2015 IHS estimated that the lowest cost oil sands project-an expansion of an in situ operation-could break even around $50/bbl WTI.

Oil prices have appreciated nearly 50% since a low price point in January, driven upwards as production decline have become more pronounced and supply outages have occurred. As of June prices, have begun to toy with $50/bbl. However, the pace of future recovery is likely to be more moderate than the preceding six months. An abundance of oil in storage, the prospect that US tight oil activity will respond to higher prices, and the possibility that key OPEC members will opt to maximize production instead of managing supply will all weigh on the pace of price recovery.

These factors will both support and moderate the pace of future growth in the oil sands. Just as US tight oil producers have been high-grading, or concentrating their activity on the most productive areas, a similar response is expected in the Canadian oil sands. Although in 'classic' Canadian oil sands fashion, this high-grading is likely to occur over multiple years as opposed to months for tight oil producers. As it occurs, IHS anticipates oil sands investors will focus their investments onto the most economic projects: expansions of existing facilities. IHS expects that over 80% of future activity in our outlook will be underpinned by expansions of existing facilities - these being well understood, quicker to first oil, and cheaper to construct. This all equates to less risk at a lower cost. 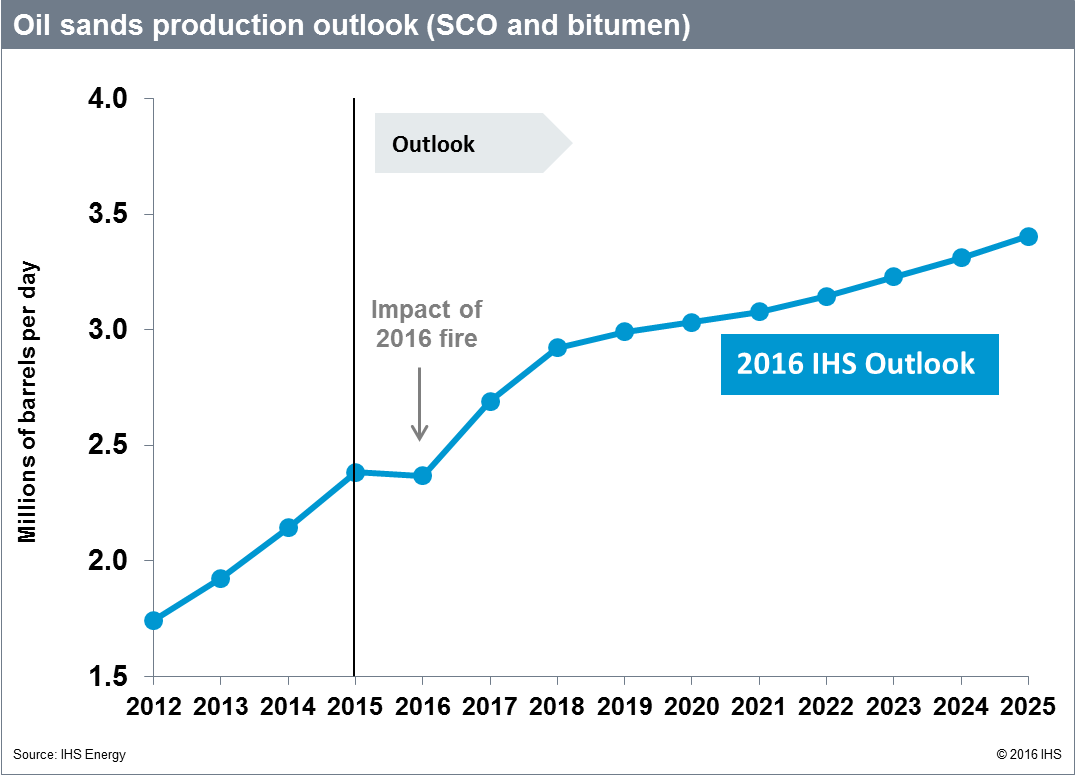 The long-lead times associated with oil sands development means growth has continued through the worst of the low oil prices. A lack of production declines in the oil sands points to growth, because investments have a more direct impact on supply growth than other forms of oil production. But growth will be different. It will come with a lower price tag. Yet, at the same time, it will be more modest than in the past, affected by the pace of price recovery and future pipeline capacity. The impact of lower prices will play out over the first half of the next decade as a long-after shock of reduced investment will slow supply additions through this period.

Kevin Birn is a Director with IHS Energy
Posted on June 27, 2016