Oil Prices: Correction after the storm in the US Gulf

Oil prices have recovered significantly last week primarily due to the continued decline in US crude inventories. This suggests that supply has further tightened, especially in combination with increased risk of future disruptions related to the rising tension in the Middle East Gulf. The seizure of a tanker carrying Iranian crude by the UK off the coast of Gibraltar has contributed to the sentiment. Meanwhile, there is some hope for improvement in the relationship between Washington and Beijing as negotiations proceed with optimism that the trade war could be resolved later this year.

As real numbers exceeded earlier expectations, the market reacted by pushing oil prices higher. Brent flirted with 68 USD per barrel, while West Texas Intermediate surpassed 60 USD per barrel, the highest since late May. The current sentiment in the market seems to have changed, as stockpiles shrank by around 3.5% since reaching the highest level in almost two years in early June. The declining inventories of the US, together with Iran's rhetoric have shaped expectations for tightening supply, even if this happens in parallel to higher concern about declining demand for crude oil.

Furthermore, the movements in the oil prices have also been supported by earlier concerns that Tropical Storm Barry could affect crude production in the Gulf of Mexico. As the storm was expected to approach Louisiana, with flooding already caused in the region, petroleum producers have been evacuating and shutting in production at some platforms.

Crude oil prices have decreased after the weekend as Tropical Storm Barry weakened without any long-lasting disruptions in US infrastructure. Meanwhile, an International Energy Agency (IEA) report warned that surplus unexpectedly returned despite OPEC+'s production cuts. 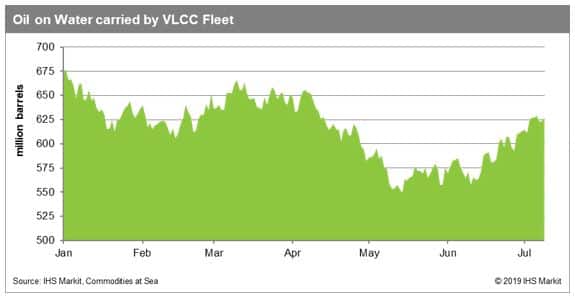 According to data by IHS Markit's Commodities at Sea, volumes of oil seem to have increased for VLCCs since the beginning of this month having surpassed 625 million barrels. Meanwhile, volumes on Suezmaxes have been pushed marginally lower, while levels have been rather stable for Aframaxes. 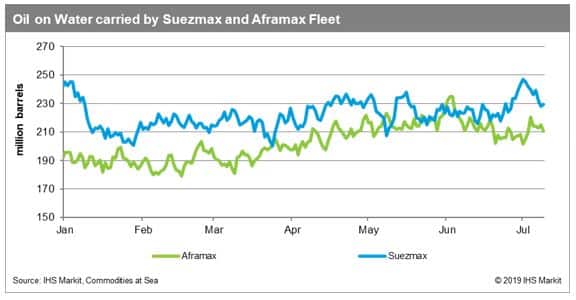