The African upstream sector is under increasing pressure as investors focus on core locations and lower carbon short cycle opportunities. Yet there does still appear to be an appetite for activity in Africa's under-explored basins, particularly from leading frontier explorers such as Total and Shell who have the capability to not only explore but also develop discoveries. Compared to other Sub-Saharan countries South Africa and Namibia rate highly in terms of investor attractiveness, with progressive fiscal system, relatively large and prospective license blocks and in the case of South Africa supply chain competence. The key to the timely commercialization of discoveries in these basins is likely to be ensuring a large enough discovery given the limited existing infrastructure and in the case of gas a viable end market, domestically or internationally.

Total's Luiperd and Brulpadda discoveries reawakened interest in offshore southern Africa. The discoveries opened up a new ultra-deepwater play in the Southern Outeniqua Basin and are likely to have positive implications not only for the South African energy sector, which relies heavily on coal and has been subject to years of crippling power outages, but also for reigniting further interest offshore southern Africa. The Luiperd discovery alone proved to be the largest discovery in Africa in 2020 and the second largest worldwide.

Total - who holds 16% of available offshore acreage across South Africa and Namibia - have suspended further exploration plans in the Southern Outeniqua Basin. This decision is more likely indicative of the company's confidence in resource content and potential, presenting an opportunity to negotiate terms and development plans ahead of the government finalising the new Upstream Petroleum Resources Development Bill. The sooner a route to market is established and the new legislation is passed the quicker these new discoveries can be brought to market. Delays to the passing of the legislation also puts other offshore exploration opportunities at risk as investors continue to re-prioritize their global portfolios. 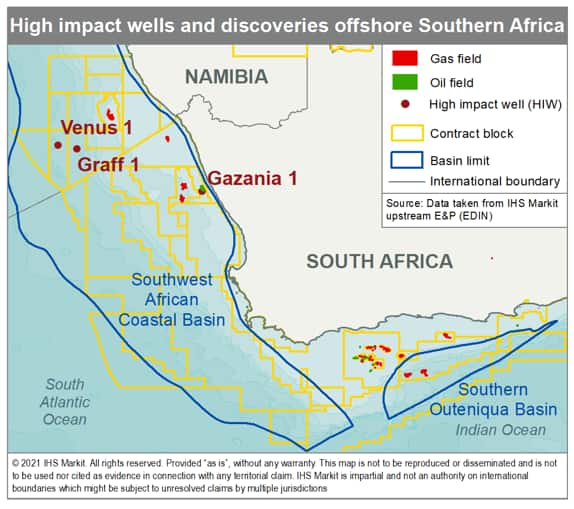 Another southern African basin to watch is the Orange Sub-Basin of the greater Southwest African Coastal Basin. In southern Namibia both Total and Shell are planning high impact deepwater wells this year. Should respective Venus-1 and Graff-1 prove to be successful, they could open-up multibillion-barrel plays. Azinam's Gazania-1 well will test an oil target up-dip from a proven stratigraphic play on the South African nearshore shelf. All three wells are oil directed and independent of each other, as they test different plays in the basin. All three wells will require substantial infrastructure to bring the resources to market. Consequently we have determined a minimum viable field size of 250 MMbbls for Venus or Graff and 50 MMbbls for Gazania, given its shallower location. Any gas discoveries in Namibia could possibly reignite the offshore Kudu gas development, which has struggled to be developed to date, whilst a gas discovery at Gazania would struggle to be developed given its isolated location.

Keryn Tsimitakopoulos is an Associate Director of Research for upstream energy at IHS Markit.