The pace of UK economic growth slowed sharply at the end of 2018, slipping into decline in December, according to official data. The numbers confirm the deterioration indicated by earlier survey data, which also suggest that the slowdown intensified in January as mounting Brexit uncertainty exacerbated a broader global economic slowdown. 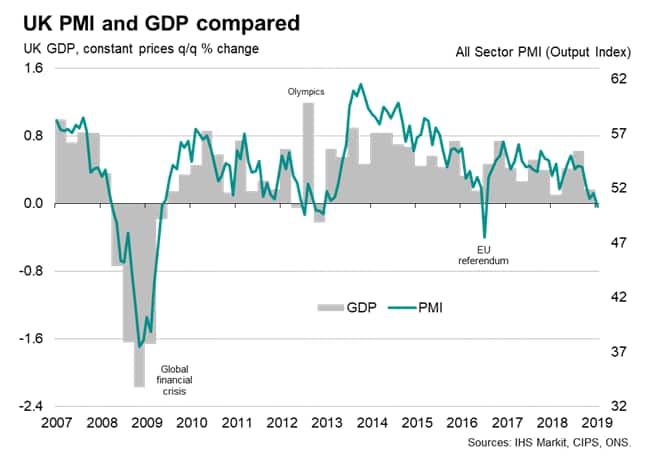 The first official estimate of economic growth in the fourth quarter of 2018 indicated that GDP rose just 0.2%, markedly weaker than the 0.6% expansion seen in the third quarter. The subdued end to the year meant 2018 saw the joint-weakest expansion of the economy since 2009, with growth of 1.4%. 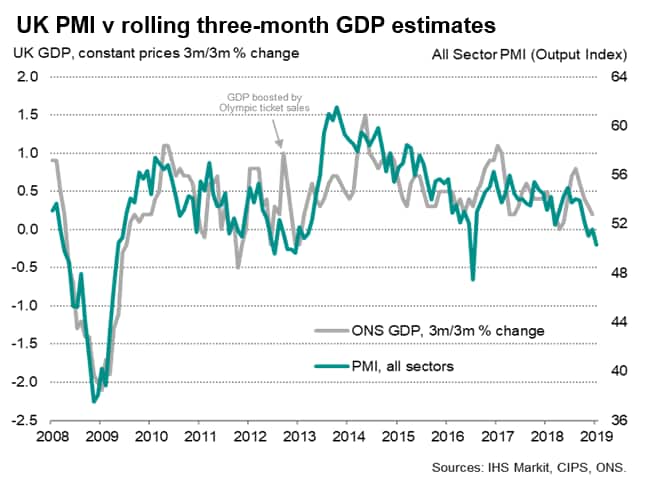 The disappointing fourth quarter was even more striking due to a 0.4% drop in output in December alone, which was the sharpest monthly decline for nearly three years. The sudden worsening in the pace of economic growth matches the signal from the PMI surveys, which pointed to a 0.1% expansion in the fourth quarter. 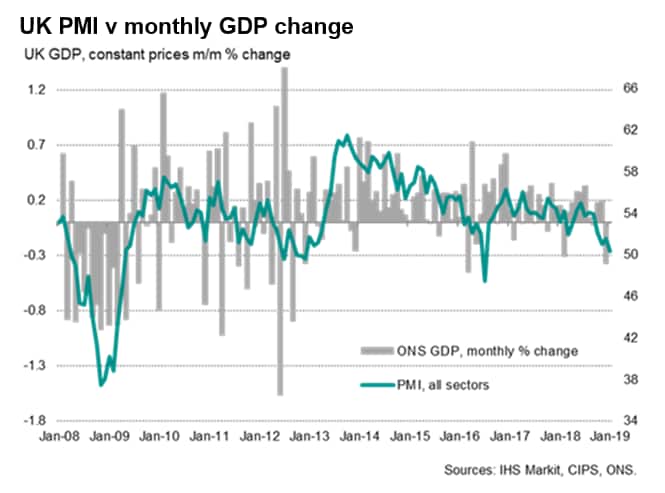 The details provided scant hope of encouragement. Business investment fell for a fourth successive quarter, with the rate of decline gathering pace to leave investment 3.0% lower than a year ago.

By sector, manufacturing led the weakening with output down 0.9% in the fourth quarter, its largest decline since 2012. Construction also fell into contraction, with output dropping 0.3% (plunging 2.8% in December alone). Services were consequently the only major part of the economy to have expanded, though even here the rate of growth slowed to 0.4%, its weakest since the first three months of the year, as output fell 0.2% in December.

However, within services, the fourth quarter saw falling output in sectors such as financial and insurance services, information and communication, arts and recreation and hotels and restaurants. Transport services and professional services enjoyed the strongest quarterly expansions.

The January surveys point to worse to come. A triple-whammy of weaker surveys pushed the IHS Markit/CIPS 'all-sector' PMI down to 50.3 in January from 51.5 in December. The latest reading was the lowest since December 2012 with the sole exception of July 2016, when the economy stumbled momentarily after the Brexit vote. Such a low PMI reading indicates that GDP likely stagnated at the start of 2019.

The downturns of the construction and manufacturing sectors indicated by the official data tallied broadly with the substantial weakening of the PMI survey data for both sectors seen towards the end of last year, as does the loss of momentum of the service sector as 2018 came to an end. Manufacturing and construction continued to act as a drag on the economy in January, with the service sector stagnating.

Worryingly, firms responded to a worsening order book situation in January by cutting headcounts for the first time since July 2016. Although only modest, the drop in payroll numbers was the steepest since November 2012 and adds to indications that companies have become increasingly risk averse in relation to hiring and investment. 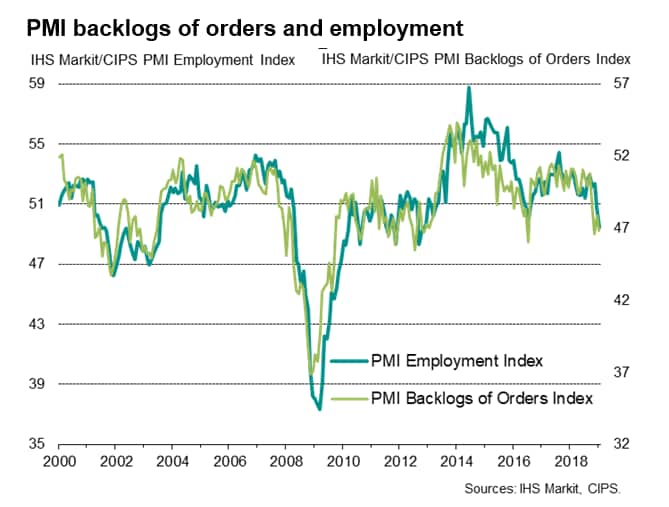 Business sentiment about prospects for the year ahead meanwhile continue to run at levels that have historically presaged an economic downturn. Worries expressed about the outlook in the latest PMI surveys were most commonly linked to heightened Brexit anxiety, though wider global political and economic factors were also reported to have taken their toll on demand, especially fears of a European economic slowdown. 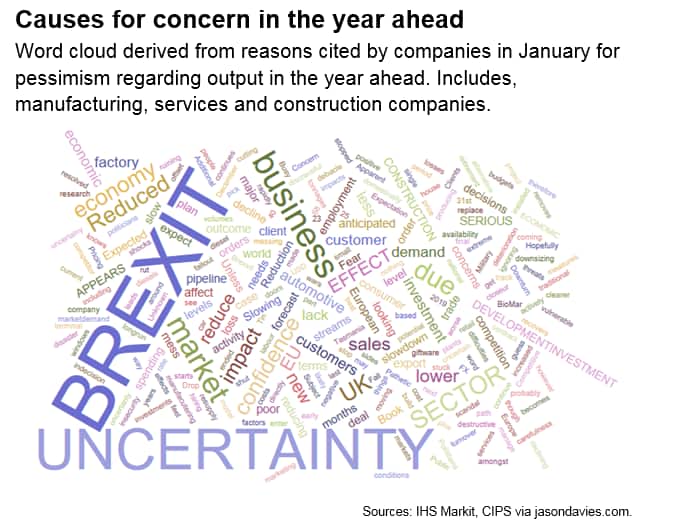 With Brexit uncertainty set to intensify as the 29th March leaving date nears, it seems highly likely that business spending will continue to be reined in until companies see greater clarity in relation to the UK's future arrangements with the EU.

In the meantime, economic growth has continued to slow in the rest of the world, which is adding to current UK exporters woes and raises the risk that any potential rebound in growth after a Brexit deal could prove subdued. Global PMI data indicated the weakest expansion for 28 months at the start of 2019 amid a largely broad-based slowdown. Importantly for the UK, the surveys point to an increased risk of a stagnation or even contraction in the eurozone, which is the UK's largest trading partner.