News of the economy contracting for a second successive month in September has been swiftly followed by a warning of how the growing economic malaise is feeding through to the labour market. 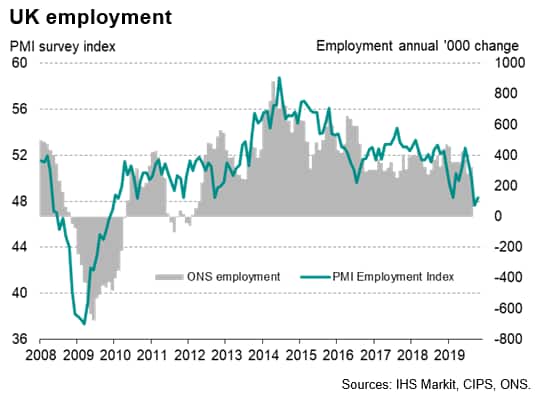 Malaise to extend into October

The official data are now falling into line with earlier warning signs of a weakening labour market from the surveys, which suggest that the deteriorating picture for jobs and wage growth has persisted into October. Recruitment agencies reported that the demand for permanent staff at employers had grown at the joint-slowest rate for a decade in October as uncertainty and worries about the outlook reduced firms' appetite to take on extra employees. The number of people placed in permanent jobs meanwhile fell for an eighth straight month, dropping in October at one of the steepest rates since the global financial crisis. Wage growth remained elevated, however, due to ongoing shortages of suitable staff, although the rate of wage inflation was reported to have been running well below that seen this time last year. 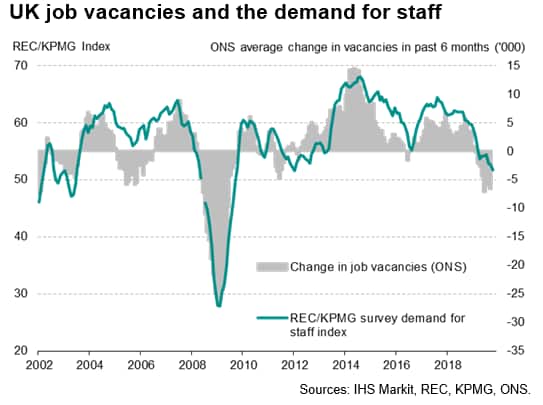 A similar weakening jobs trend was seen in the PMI surveys, where employment was reported to have fallen for a second month running in October, with the past two months having seen the largest back-to-back drop in employee numbers since 2009. The fall in employment has coincided with the surveys indicating how the economy is going through its toughest patch since 2009, with the impact of slower global economic growth being exacerbated by Brexit uncertainty, with paralysis ahead of an upcoming general election now adding to the woes. 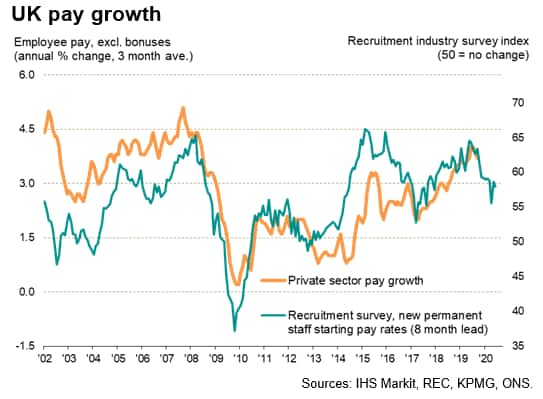 While the unemployment rate fell back to 3.8%, its lowest for over four decades, it's the gloomier hiring trend and signs of slower wage growth that will likely be of most concern to policymakers, especially as this could feed through to weaker consumer spending. Consumers have been a key prop for the economy in recent months, sustaining spending even when business uncertainty has paralysed corporate spending and investment. Two policymakers have already voted for a cut in interest rates, and any further weakness in the data will likely add to more calls for renewed stimulus to help the economy work through this soft patch.