Official data confirmed the survey data signal that US manufacturing output growth picked up in the second quarter, but the survey data indicate that the growth trend appears to be softening as we head into the third quarter. Worries about the impact of tariffs and higher prices were meanwhile reported as the most common threats to the business outlook.

This respectable second quarter performance had already been indicated accurately by the IHS Markit PMI survey. We use a simple model based on a regression using the PMI survey's output index as the sole explanatory variable of the official growth rate (note that we don't use the headline PMI in our model, as this composite index includes variables such as employment and new orders). This model showed that the average PMI output index reading of 55.7 in the second quarter was historically consistent with output rising by just over 0.5%.

By comparison, a similar regression-based model for the ISM survey output index produces an estimated second quarter rise of 1.0% (after a 1.4% increase in the first quarter), once again highlighting how ISM survey data appear to have been overstating manufacturing growth in recent years. 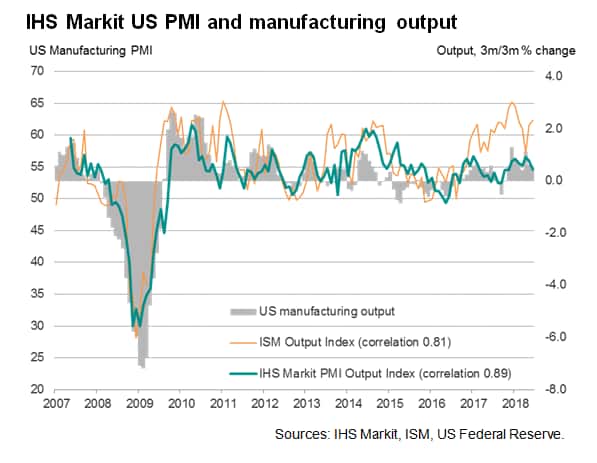 However, there are signs from the survey that growth may be weakening. The June output index reading of 54.6 represented the weakest monthly increase in production since last November, and indicates that the quarterly growth rate slowed to just under 0.3% in June alone.

Although new orders continued to grow at a faster rate than output, the June inflow of orders was also the lowest since last November, hinting at slowing demand growth. Export orders slipped into decline for the first time in nearly a year.

Firms worried by tariffs and prices

Companies' expectations have improved relative to other countries, but trade war and price worries are widespread, with one-in-four companies seeing tariffs and rising raw material prices as key threats.

The PMI's sister tri-annual Business Outlook Survey, which tracks sentiment from PMI survey respondents about the year ahead, showed that US manufacturers were unusual in becoming more upbeat about the year ahead in June compared to the prior survey, conducted back in February.

The net balance of manufacturing companies expecting business activity to rise over the coming year minus those expecting a decline rose from 28% back in February to 32% in June. However, this is down from 38% last October, suggesting companies are less upbeat than they were late last year.

The waning of optimism relative to last year has been in part due to the survey also recording increased worries about the adverse effect of tariffs, in conjunction with growing concerns about rising prices. Of the 320 companies that responded to a question asking about which key threats faced their business over the coming year, 16% of firms explicitly cited tariffs as a concern in June, with a further 17% reporting worries relating to the impact of rising input costs or raw material prices, often in turn linked to tariffs and trade wars. 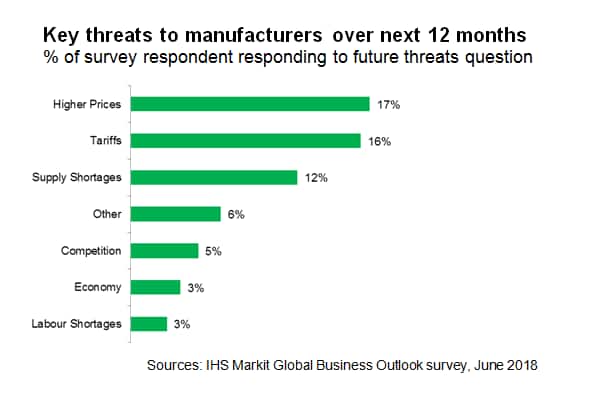 Supply shortages, reflecting a recent record lengthening of supplier delivery times in the monthly PMI survey, were cited by 12% of companies that responded to the future threats question.

Tariff, price and supply worries in fact far exceeded all other areas of concern. The threat of business being stymied by a weakening of the economy or low demand was cited by just 3% of manufacturers, suggesting companies remain upbeat about the underlying health of the economy, with a similarly low proportion citing competition as a key threat.

Perhaps surprisingly for an economy with historically low unemployment, labour shortages were seen as a threat to business growth by only 3% of manufacturers.

By comparison, the February 2018 Outlook survey saw just 1% of companies report that tariffs and trade wars represented a threat to their business, and only 7% saw a threat from rising input costs. Material shortages as a threat were only cited by 4%.

When asked about key opportunities facing their companies in the year ahead, just 4 of the 320 companies reporting a possible threat to future business activity in the June Business Outlook Survey (around 1%), explicitly reported that they expected tariffs or trade wars to benefit their company. By far the most common opportunity reported by companies was the expected benefits associated with investing in the expansion of their business, in terms of building-out new capacity, launching new products and boosting sales and marketing expenditure.