The COVID-19 pandemic retains the ability to throw the Vietnamese manufacturing sector off course in 2022 despite a lack of virus containment measures, primarily through the impact of staff shortages as infected workers are unable to contribute to production. This was certainly the case in March as the largest wave of the pandemic so far peaked in Vietnam and many workers were forced to stay at home.

The S&P Global Vietnam Manufacturing PMI signalled a fall in output for the first time in six months at the end of the first quarter, stalling the recovery from last year's Delta wave. Firms primarily linked the drop in production to the impacts of the pandemic, with widespread infections among staff meaning that they were unable to work, thus limiting firms' productive capacity. However, so far the downturn resulting from the Omicron wave has not been as severe as prior waves of the virus. 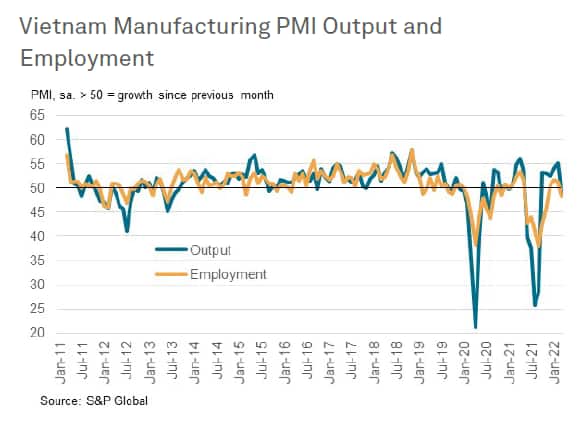 Up until March, firms had been able to continue to expand production despite the spread of the virus as the authorities in Vietnam moved away from the 'zero-COVID' policy, implemented in the first part of the pandemic, to one that is more in line with living with the virus and avoiding restrictions on economic activity. The sheer volume of infections in the latest Omicron wave, however, led to disruption despite a relative lack of restrictions.

That said, the absence of lockdowns and temporary company closures this time around means that output declined at a much softer pace than in the previous wave.

In truth, staffing capacity has been a problem for Vietnamese manufacturers since the Delta wave of the pandemic in the middle of last year. During that wave, people escaped larger cities and COVID-19 hotspots to return to their hometowns. Ongoing concerns around the pandemic meant that they were slow to return to urban areas, something respondents to the PMI survey mentioned regularly towards the end of 2021 as having limited workforce numbers.

Employment continued to fall sharply through to last November, even after a solid recovery in workloads had been recorded, and rose only slightly in the three months to February. As a result, manufacturers have been unable to keep up with workloads, seeing backlogs of uncompleted orders increase in six of the past seven months, and to a record extent last September. There had been hopes that more workers would return following the Tet festival in February, but the virulence of the Omicron variant put paid to this. 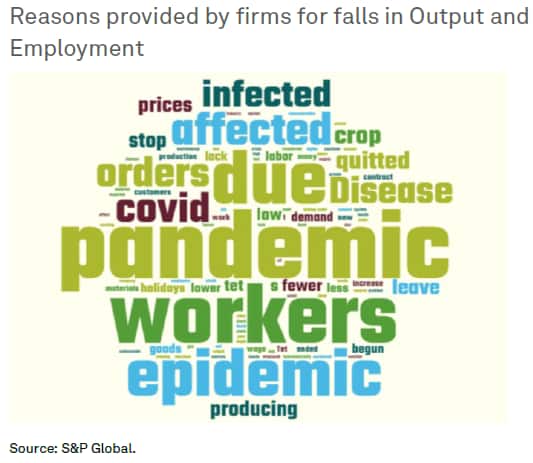 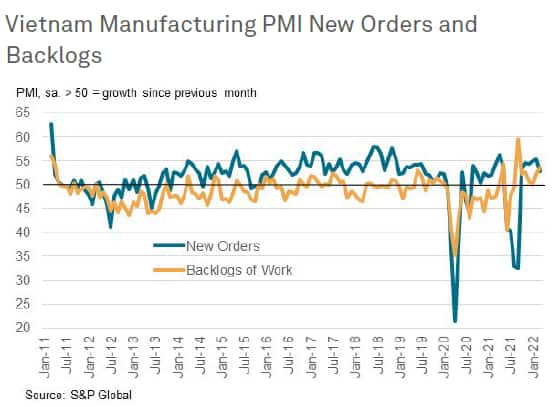 As well as the disruption caused by the pandemic, firms also faced more intense inflationary pressures in March. Input costs rose at the fastest pace in almost 11 years amid reports of higher prices for oil and gas in particular as the war in Ukraine caused prices to surge. Output charges also increased at a much faster pace accordingly. A spell of elevated inflation could act to choke off demand, further limiting overall sector growth. 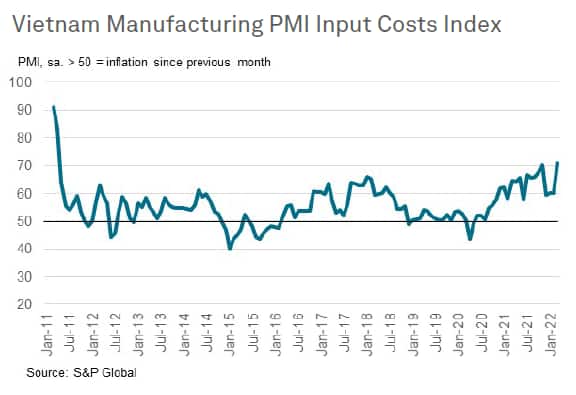 On a more positive note, the current wave looks to have peaked in mid-March, with infection rates easing towards the end of the month. This should hopefully mean that more workers can return to factories, boosting operating capacity during the second quarter and enabling firms to work through backlogs. S&P Global still anticipates GDP to rise 5.8% in 2022 as the economy recovers from the Delta wave in 2021, but the latest PMI data illustrate that the pandemic still has the ability to cause problems in the economy.