PMI surveys showed UK business activity growing at a sharply reduced rate in October amid slower inflows of new orders and a deterioration in business optimism about the year ahead. Brexit uncertainty in particular continued to cloud the outlook, dampening current spending and investment, though other factors were also reported to have weakened demand, including global economic slowdown worries.

The surveys therefore add to the evidence that the economy is being restrained, potentially temporarily, by Brexit uncertainty as discussions between the UK and EU intensify. However, it remains unclear as to the extent to which Brexit worries are merely exacerbating a more broad-based slowing of the economy.

At 52.2, the IHS Markit/CIPS 'all-sector' PMI output index fell from 53.9 in September to indicate a marked easing in the pace of expansion. With the exception of the snow-related disruption seen in March, the latest increase in output was the weakest since the immediate aftermath of the Brexit vote in July 2016. Historical comparisons with GDP indicate that the October PMI reading is indicative of the economy growing at a quarterly rate of just under 0.2%, down from a 0.4% pace indicated for the third quarter. 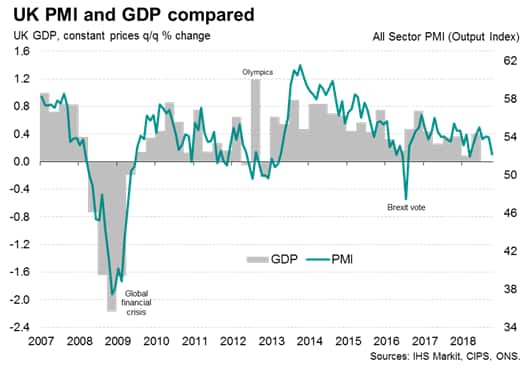 All three main business sectors reported growth in September, but only construction recorded an increased rate of expansion. Service sector business activity growth eased sharply to the second-lowest since July 2016, but it was manufacturing that reported the worst performance. Factory output expanded at the slowest rate since the EU referendum.

The survey data suggest that, despite slowing, the service sector is on course to provide the main impetus to economic growth in the fourth quarter, albeit growing at a rate of just 0.2% if current levels are maintained (around half the pace seen in the third quarter). 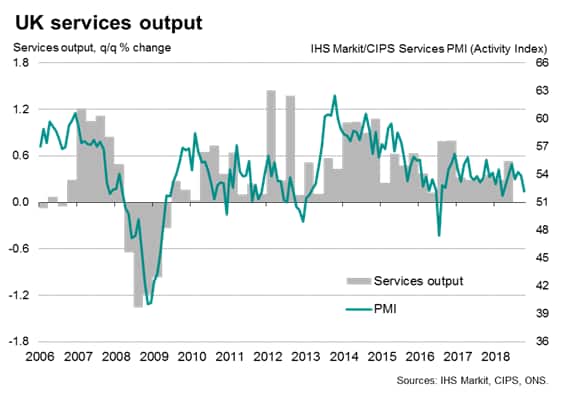 In contrast, at current levels, manufacturing is on course to act as a drag on the economy in the fourth quarter with construction making only a weak contribution to GDP. 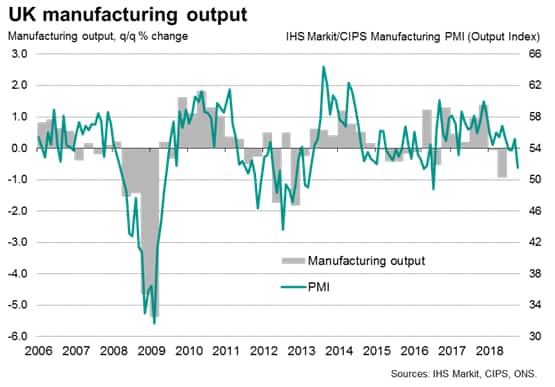 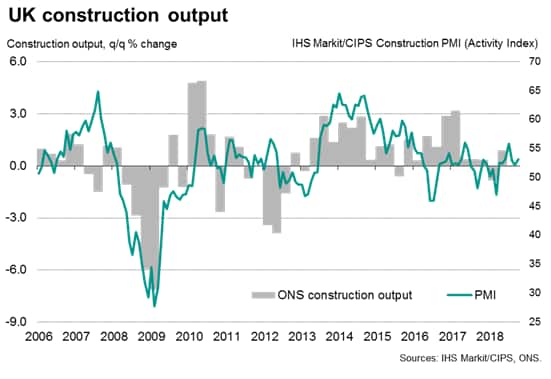 The slowdown in business activity reflected a substantial waning in growth of new business across the three main sectors of the economy to the lowest since July 2016. New work rose only very modestly in both services and construction, while volumes of new orders fell in manufacturing compared to September.

Business expectations for the year ahead meanwhile slumped to the gloomiest since the Brexit vote. With the exception of July 2016, the degree of optimism was the lowest for six years, down to levels last seen during the height of the Eurozone debt crisis. Optimism deteriorated in all three sectors, but waned most sharply in the construction sector. 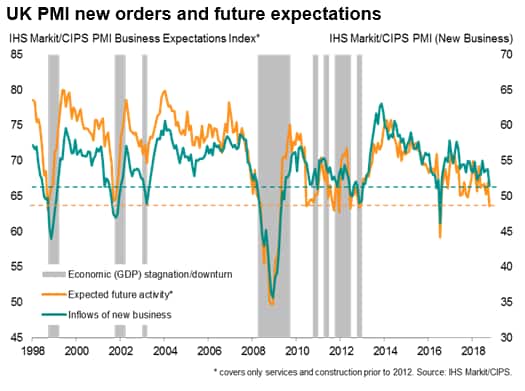 The drop in business optimism and the reduced growth of new business was generally blamed on Brexit-related uncertainty, which was widely reported to have caused customers to delay decision making or reduce their spending, while at the same time clouding the outlook. However, trade wars, geopolitical risks, rising prices, higher interest rates and financial market volatility all added to the gloomier outlook.

Hiring took a knock from the combination of heightened uncertainty and a renewed decline in levels of outstanding work. Jobs growth eased to the slowest for three months. A drop in factory headcounts and reduced growth of service sector payroll numbers were in part alleviated by robust construction sector hiring. 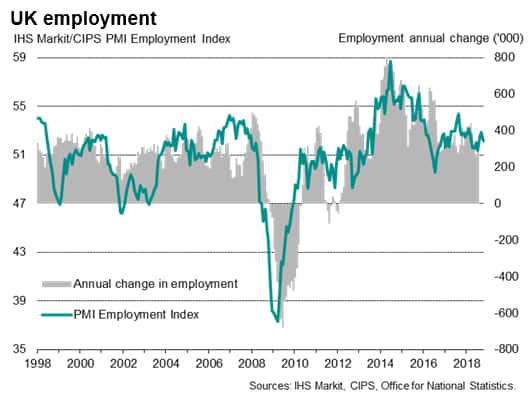 Price pressures meanwhile remained elevated. Input cost inflation measured across the three sectors eased to the slowest for five months but held above the average recorded so far this year. A marked moderation in the rate of increase in manufacturing and construction, linked to lower global commodity prices, was offset by a slight acceleration in cost inflation in the service sector, mainly reflecting higher wages, fuel and energy costs. 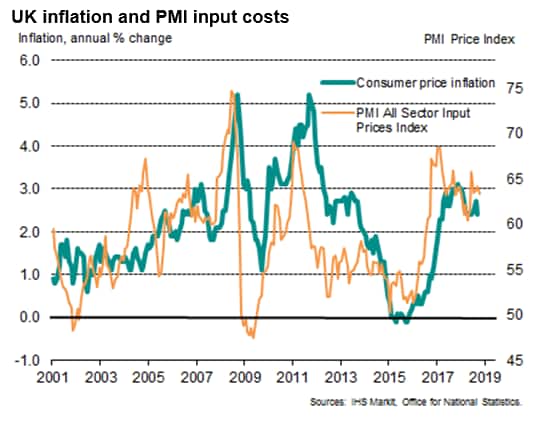 The rise in input costs fed through to another sharp rise in average selling prices for goods and services, though the rate of increase remained below recent peaks seen earlier in the year.

The survey price inflators suggest that consumer prices will likely remain closer to 3% than 2% in coming months, and therefore stay firmly above the Bank of England's target. However, the drop in the headline PMI indicates a slowdown to a pace of economic growth that would normally be associated with interest rates being cut rather than hiked. 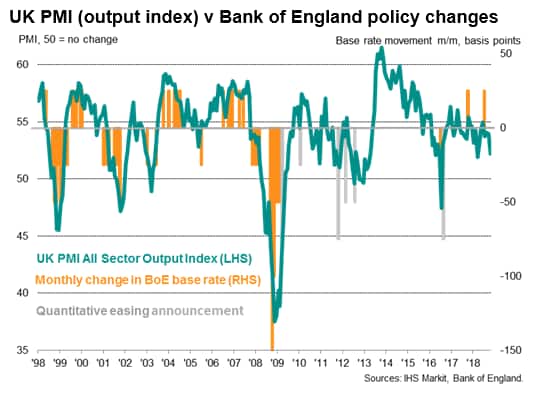 Furthermore, the recent declines in the new orders and future expectations gauges took these forward-looking indicators into territory that would normally be only seen at times of stress, consistent with the economy stagnating at best. Risks to future growth are therefore tilted to the downside.

The question facing policymakers is the extent to which the current slowdown is related to Brexit uncertainty, which could therefore prove temporary. While the survey no doubt brings further evidence that Brexit worries are increasingly undermining business activity, the survey responses also highlight how the economy is facing other tailwinds, including a broader global slowdown, trade wars, heightened geopolitical uncertainty and tightening financial market conditions.

Any failure of the economy to rebound will therefore not only cast doubt on the current hawkish tone among policymakers, but will also call into question the timing of the August rate rise. As we noted at the time, the August hike seemed unusual given the modest rate of economic growth being indicated by the surveys relative to that seen for prior rate hikes. 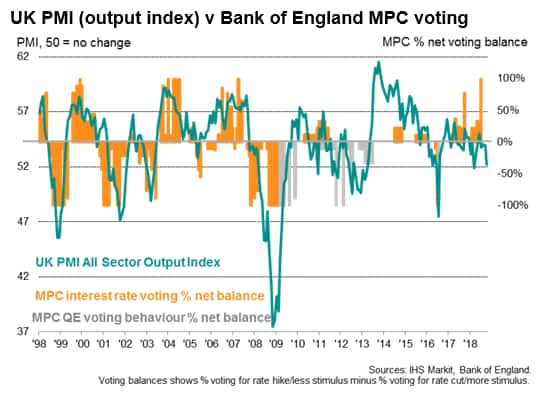