Generic drug manufacturers have warned that up to 90% of drugs currently supplied to Northern Ireland may be threatened with withdrawal as a result of post-Brexit bureaucratic barriers. According to the British Generic Manufacturers Association (BGMA)'s CEO Mark Samuels several manufacturers were already considering withdrawing a large proportion of the medicines that they currently supply to the Northern Ireland market, and this could pose a major risk to patients, especially as generic medicines account for four of every five medicines prescribed under the National Health Service (NHS).

The Northern Ireland protocol, which has been in place since the UK's post-Brexit trade deal with the European Union, came into force on 1 January and was designed to avoid a hard border within the island of Ireland. Under this protocol, medicines manufactured in Great Britain (England, Scotland, and Wales) require separate licensing for use in Northern Ireland and must undergo separate checks for safety and other criteria before they can be released for patient use. Formerly, the provision of medicines was seamless via a single regulatory dossier and streamlined regulations as part of the European single market. Brexit however has resulted in an unfortunate and challenging situation for Northern Ireland that generic manufacturers, as well as politicians, would like to see urgently addressed.

Until this year, Northern Ireland has been treated as an integral part of the UK supply chain. Although there is a grace period in place to make preparations for some areas of non-alignment, the impact is potentially already being felt in that market. According to BGMA's CEO Samuels, one of only two suppliers of potassium chloride for intravenous drips to Northern Ireland has reportedly already withdrawn all eight of its products, halving provision for the territory. Failure to address these bureaucratic barriers could significantly impact market access of UK-bound generics to Northern Ireland. A likely alternative source for generic medicines would be from the Republic of Ireland.

In order to assess the potential impact of this situation on Northern Ireland, we compared the list prices of generic products launched in the Republic of Ireland (Ireland) within the past three years, with those also available in the UK. We further narrowed down our search to products with identical dosage/units per pack across the two markets. Our sample included 35 presentations across 20 active pharmaceutical ingredients (APIs) with identical packs for the same APIs often commercialized by different companies at different prices.

We found that generic prices in Ireland were around 33% lower on average in our sample than those in the UK. This is not very surprising considering that Ireland has policies in place that mandate patent-expired drugs be reduced to 50% of the original ex-factory price, and international reference pricing (IRP) is applied to all prescription medicines including generics. Multi-source drugs in Ireland are usually all priced at nearly the exact same price (subject to the same price caps), despite being marketed by different manufacturers. Meanwhile, in the UK, there were significantly more APIs on the market for each product, and there was considerable variation in pricing. While the UK generally has no formal state-controlled price-setting processes, generics are subject to public-sector tendering processes for supply contracts by NHS. The UK also has a voluntary clawback system that helps further lower net prices for branded medicines including branded generics. On average, however, list prices in Ireland seem to be lower than in the UK for the large majority of active pharmaceutical ingredients (APIs) in our sample. 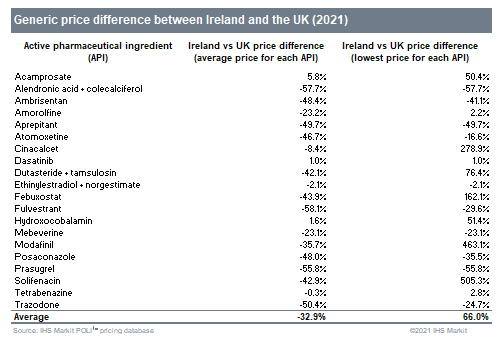 We re-examined the data, but this time instead of taking the mean price per API, we looked at the minimum price (the lowest-priced generic on the market for each API). This completely reversed our initial findings, with Ireland's prices on average 66% higher than those of the lowest-priced generic in the UK. There was a lot of variation in that sample, however, with several drugs standing out as major outliers, including solifenacin (+505% more expensive in Ireland vs UK), modafinil (463% more expensive), febuxostat (162% more expensive), and cinacalcet (279% more expensive) among the APIs with greatest pricing discrepancy between the two markets. 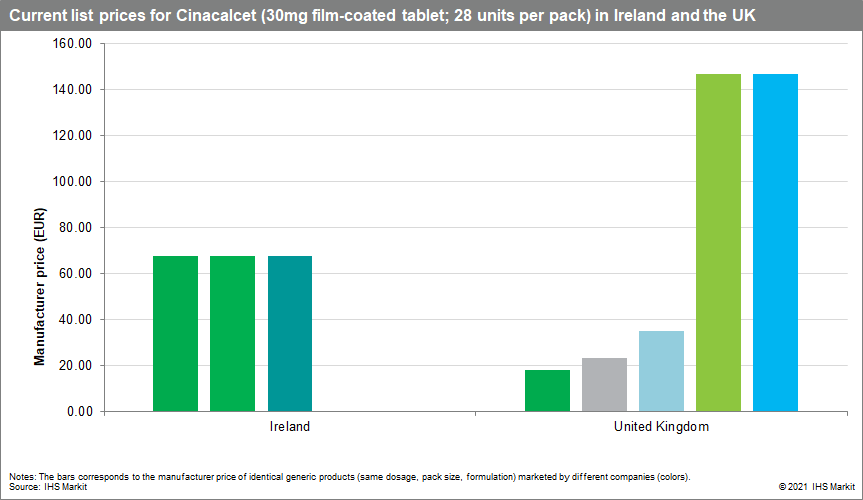 A closer examination of manufacturer prices for cinacalcet - a medication used to treat hyperparathyroidism - clearly illustrates the variation in prices in the UK market, and how low prices can drop relative to the competition. It is worth highlighting that the NHS procures generics through bulk purchasing programs and negotiated discounts not captured in our data. However, it could be assumed that some vendors might still try to compete by setting list prices as close to the lowest net price as possible. We see the lowest list price on the UK market as a good proxy for net price. For the specific pack size and dosage of cinacalcet, we looked at, there were 3 marketed products in Ireland and five in the UK. As expected, Ireland's prices were identical despite being commercialized by 2 different companies (1 company had two products commercialized under slightly different brand names). Meanwhile, UK prices ranged widely from a low of EUR17.87 to a high of EUR146.78 - more than 7x more expensive than the lowest price. Each of the five products marketed in the UK is manufactured by a different company.

Who got it right?

Based on these preliminary findings, Northern Ireland could end up paying higher costs for certain generic products if indeed it will need to source drugs from the Republic of Ireland instead of the UK. The NHS' bulk purchasing power and free pricing market has helped introduce generic products at record-low list prices, as some manufacturers try to compete with those selected for its tendering programs. Although our case study focused on list prices, the BGMA published research on actual selling prices in the UK versus 5 other undisclosed European countries in 2019. The study found that generic net prices were significantly lower in the UK compared to these five other markets.

While it is possible that the situation in Northern Ireland will be resolved before any major market access challenges arise, we were left wondering about pricing and reimbursement strategies, and who got it right? The findings certainly call into question the efficacy of unilateral across-the-board price cuts versus other strategies such as bulk purchasing programs, tenders, and negotiated discounts at lowering pharmaceutical spending. Maintaining a vibrant free market for multi-source drugs paired with voluntary discounts/clawbacks may in fact be more effective at lowering drug spending than mandatory price caps.