The Northern Border pipeline is a 1,500 mi pipeline that runs from the Montana-Saskatchewan border in Canada to Fort Hayden in Indiana (see Figure 1). The 2.5 Bcf/d pipeline that is jointly owned by TC Energy and ONEOK provides a critical transportation route for natural gas from the Western Canada Sedimentary Basin to markets in the Midwestern United States. In addition to the transportation of Canadian natural gas, the Northern Border pipeline also transports a sizeable portion of the natural gas produced in the Williston and Powder River basins (primarily from the Bakken play in North Dakota). 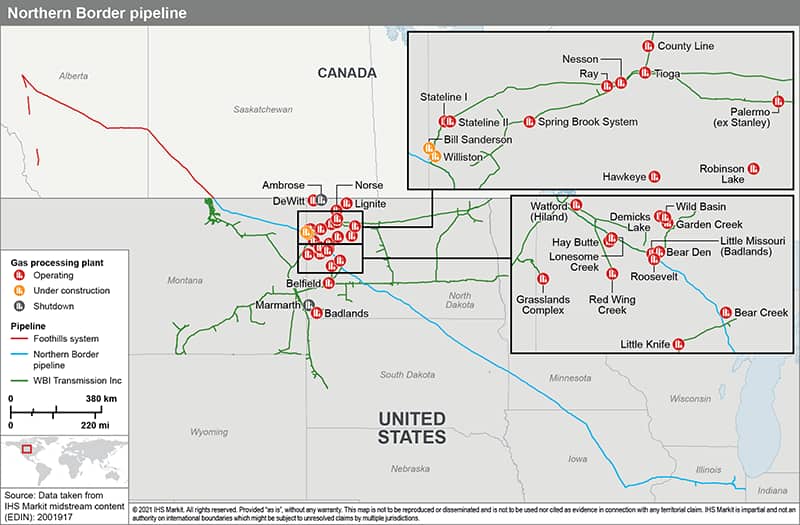 As natural gas production in the Bakken region in North Dakota has grown over the past few years, more gas processing capacity has been added (2.1 Bcf/d in 2017 to just above 3.3 Bcf/d 2020) to process the rich natural gas, which is high in NGL content, ranging anywhere from 7 gallons per Mcf to 9 gallons per Mcf. This increase in gas processing capacity has also increased the volume of gas from North Dakota flowing on the Northern Border pipeline. This situation has added to the woes of Western Canadian producers, who are competing for space on the pipeline while dealing with takeaway constraints.

Natural gas that is produced in North Dakota undergoes NGL recovery at the gas processing facility, and the residue dry gas is then delivered on the Northern Border pipeline. Several gas plants are connected to WBI Energy's pipeline network that delivers gas from gas plants to Northern Border (as shown in Figure 1). Throughput data make clear that the increase in North Dakota gas production has led to Canadian gas being displaced. The share of Canadian gas on the Northern Border pipeline fell from about 48% in 2018 to just 24% in 2020.

Pipelines transporting natural gas enforce certain gas quality specifications that the natural gas shippers on the pipeline must adhere to. Generally, the natural gas quality specifications limit the amount of heat content that can be allowed, in terms of heating value or the Wobbe Index, so that the natural gas can be used for residential and industrial purposes as fuel. In the United States, most interstate and intrastate natural gas pipelines allow gas specifications in terms of gross heating value to be within the 950-1,100 Btu/scf range. So far, the Northern Border pipeline does not have an upper limit for the pipeline's British thermal unit specifications and only specifies a lower limit of 967 Btu/scf. This situation has raised some concerns as more gas, which has a much higher gross heating value, from the Bakken region in North Dakota has been displacing leaner (lower in Btu/scf) Canadian gas, resulting in higher gross heating value of the blended gas. The main reason for gas from North Dakota to have a higher heating value is the prevailing high levels of ethane rejection in the region. According to our estimates, about 25-35% of the total ethane contained in gas is recovered, and the rest stays in gas, a term referred to as ethane rejection. Gas quality data from the WBI Energy pipeline show that a substantial amount of ethane is still left in the gas stream from the gas plants that deliver gas to WBI's pipeline system and then eventually onto Northern Border pipeline, making the gross heating value of the gas in excess of 1,100 Btu/scf. The reason not all ethane contained in gas is being recovered is there is no local demand for this ethane, and the cost of delivery to Gulf Coast markets (the primary demand center for ethane) is very high, ranging from 25 cents per gallon (cpg) to 30 cpg, yielding unfavorable netbacks
to producers and processors.

On 1 May 2020, however, Northern Border Pipeline Company filed a revised tariff record to establish a gas quality safe harbor limit of 1,100 Btu/scf on the pipeline system. Northern Border Pipeline Company states that its ability to ensure that deliveries of natural gas conform with downstream gas quality specifications has become increasingly challenging owing to the increased receipts of Bakken natural gas production, in turn reducing its ability to blend high and low British thermal unit natural gas. Further, Northern Border Pipeline Company asserts that the higher heat content gas could harm the performance and mechanical condition of Northern Border's facilities. Not a surprise, this filing by Northern Border Pipeline Company has been met with both support and protests from different parties. Producers and midstream operators are protesting the current filing, arguing that if the proposed pipeline specification revisions were to be accepted, the producers and midstream operators would have to incur significant additional costs on account of removing the additional ethane from the gas stream. One midstream company stated that implementing the necessary infrastructure updates at its gas plants to recover additional ethane to lower the heating value of the gas could take at least two years and cost in excess of $120 million.

Implications for the ethane market

With the Northern Border pipeline gas specification filing in the midst of regulatory approvals, its acceptance could lead to a significant impact on North Dakota's ethane production. Currently, a portion of the total ethane recovered from natural gas in North Dakota is shipped to Canada on the Vantage pipeline, about 40,000 b/d off the total 60,000 b/d, and the remainder comes down to the Gulf Coast as part of the Y-grade mix. The remaining ethane, about 180,000-210,000 b/d, that is not recovered is left as rejected ethane into the gas. If the Northern Border pipeline's proposed Btu/scf limit of 1,100 is accepted, producers and midstream operators will need to curtail their current ethane rejection levels to meet the new heating value set by the pipeline. Based on our estimates, to meet the new pipeline quality gas of 1,100 Btu/scf, producers and midstream operators might have to recover an additional 70,000-90,000 b/d of ethane to reduce the gas heating value below 1,100 Btu/scf. With no local demand, the incremental ethane recovered from gas will likely be shipped as a part of the Y-grade mix to the Gulf Coast market.

If Northern Border Pipeline Company is successful in getting regulatory approval to set an upper limit to the natural gas gross heating value, the US Gulf Coast market will surely benefit from an incremental 70,000-90,000 b/d of ethane supply from North Dakota at essentially no cost.