Above - In a photograph with blurred out areas provided by the Korean Central News Agency (KCNA) on 25 November 2016, North Korean leader Kim Jong-un (seated) inspects the headquarters of Large Combined Unit 380 of the Korean People's Army. Source: PA

Organisational changes to North Korea's intelligence and security services in 2016 have strengthened and consolidated Kim Jong-un's position, with revisions of the state's constitution that established the State Affairs Commission (SAC) as the supreme leadership body responsible for government and security policies.

Jane's surveys the structure of the newly formed organisation. 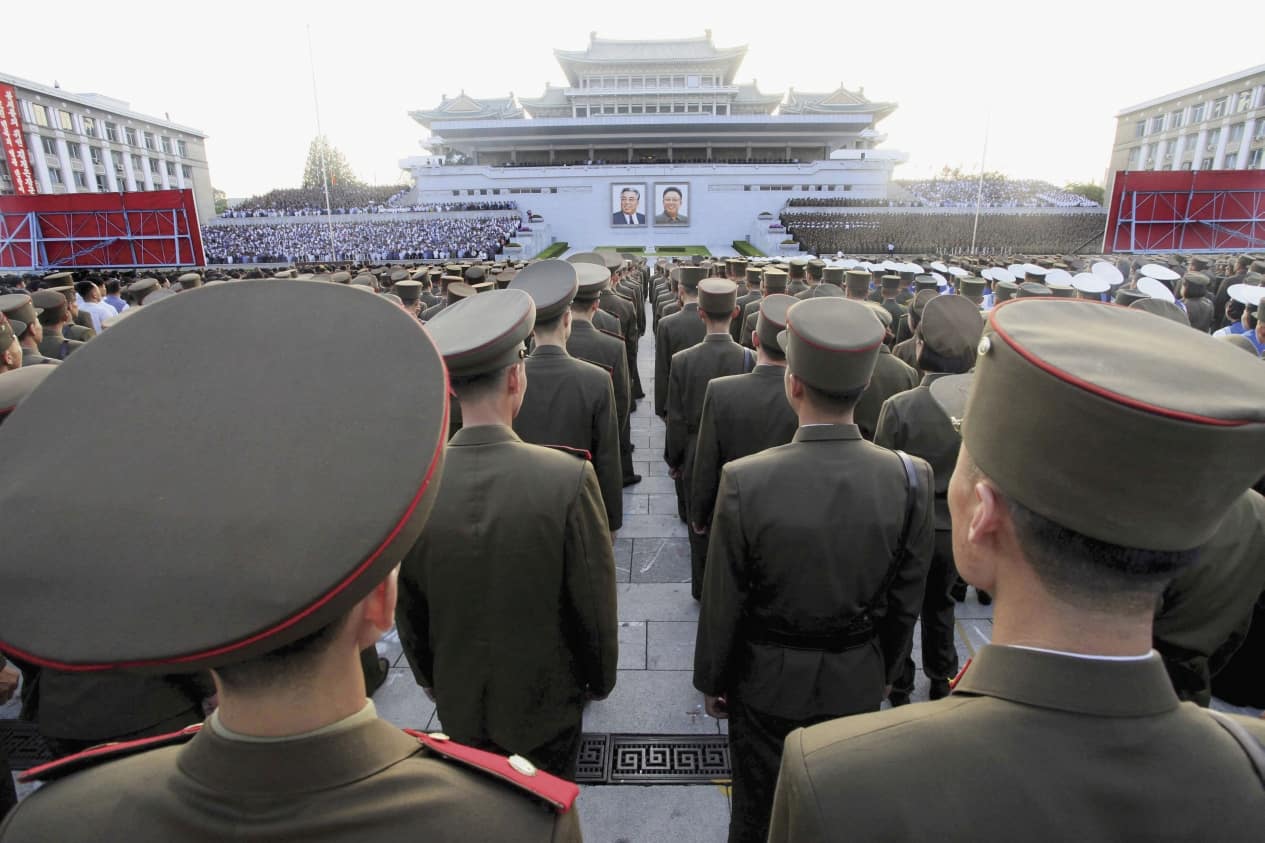 Above - Military personnel attending the unprecedented 4th Plenary Session of the 13th Supreme People's Assembly in June 2016, during which the National Defence Commission (NDC) was replaced with a newly formed organisation known as the State Affairs Commission (SAC), and Kim Jong-un appointed the new title of chair. Source: PA

Organisation
The organisation of the intelligence and internal security community originates with Kim Jong-un, who is simultaneously supreme commander of the Korean People's Army (KPA), general secretary of the KWP, and chair of the SAC. It then extends down through two distinct paths: the SAC and the KWP.
Missions
The primary missions of North Korea's intelligence and internal security services are to protect the Kim government, the Kim family, and the Korean Workers' Party (KWP) from domestic threats; to actively collect and disseminate timely and accurate information concerning political, military, or economic threats - domestic or foreign; and to neutralise any foreign intelligence collection or subversion activities. 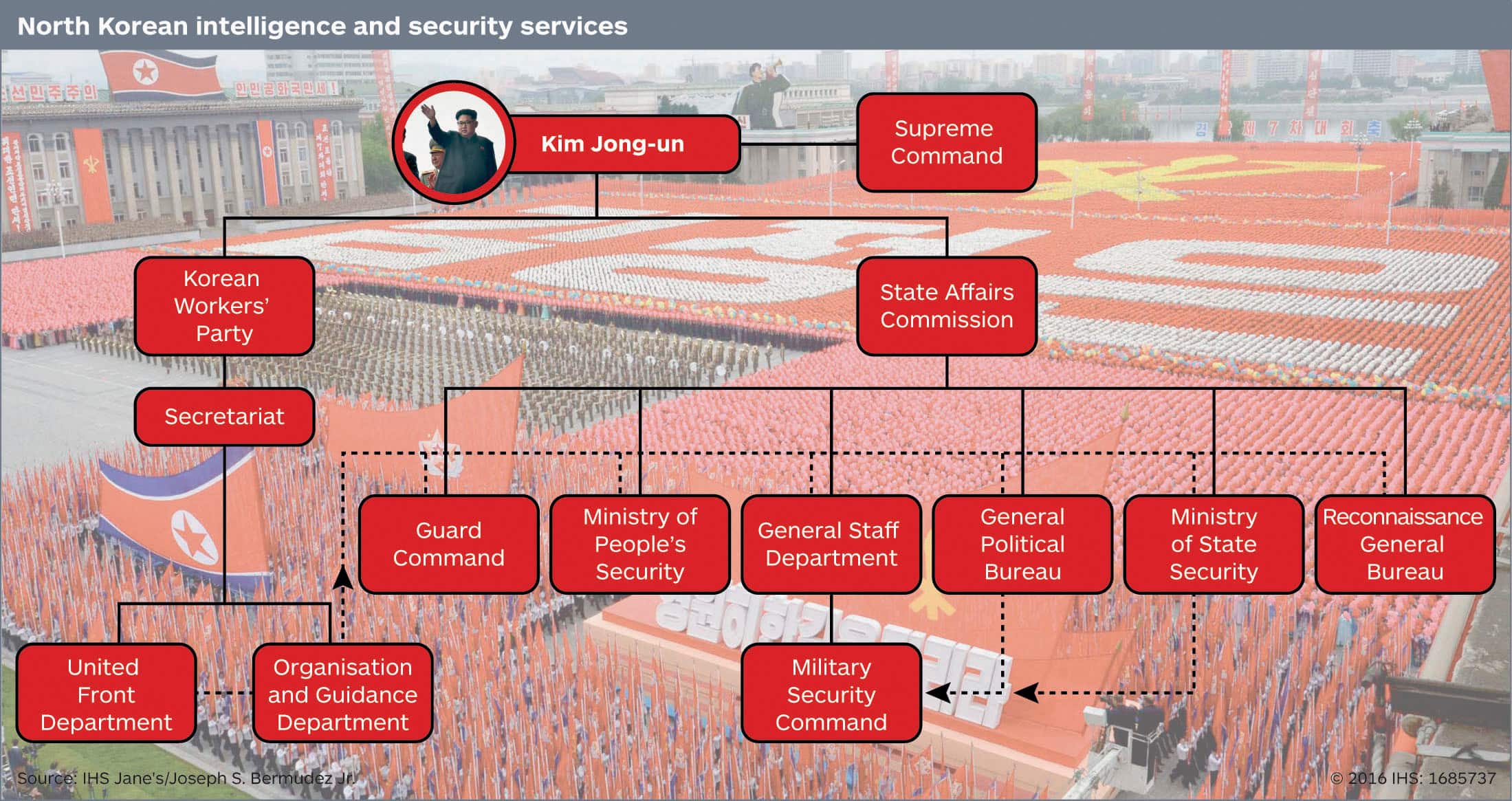 KWP Secretariat: Subordinate to the KWP Secretariat are the Organisation and Guidance Department (OGD) and the UFD. The OGD is currently considered by Jane's to be one of the most politically influential and powerful organisations within North Korea, being a centre of power and touching all aspects of life, especially within the KPA and intelligence and internal security services.

Ministry of State Security: The MSS, formerly the State Security Department, functions as both an intelligence agency engaged in active operations overseas and a domestic political security force. It is most comparable in function to the former Soviet Committee for State Security (Komitet gosudarstvennoy bezopasnosti: KGB). Its primary missions are to protect Kim and the Kim family and to ensure the political stability of North Korea.

Security Guard Command: The Security Guard Command (SGC) is responsible for the personal security and welfare of Kim, the Kim family, and high-ranking officials. It is roughly comparable to the US Secret Service or the South Korean Office of Presidential Security. The command is organised into three bureaus, a university, a Rapid Response Unit, and the Leadership Medical Team.

Military Security Command: Although institutionally subordinate to the KPA, the Military Security Command (MSC) is controlled by the MSS. This organisation is responsible for internal security, counter-espionage, and counter-intelligence within the KPA. The MSC actively seeks out and exposes elements that are corrupt, disloyal, or present a threat of coup d'état. In co-operation with the Guard Command, the MSC provides security for Kim and senior officials when they visit military units.

Outlook
There do not appear to be any significant domestic threats to the Kim government or the KWP, and none are likely to emerge in the near future due to the draconian methods employed by the internal security organisations. Although the baseline scenario is for continued stability, there remains a low probability, high impact scenario in which North Korea could swiftly and unexpectedly implode or explode.