Game changer. The rapid development of unconventional gas resources in North America is potentially a game changer for the global LNG market over the coming years. It was only about five years ago that industry expectations were for the US to become one of the world's largest importers of LNG. Today, that expectation is turned upside down as the US could be on the road to becoming one of the world's largest exporters of LNG.

While there remains considerable uncertainty over future export levels and timing, the introduction of LNG exports from the US lower 48 will have far reaching impacts on the future structure of the global LNG industry. The uncertainty centers around the extent and impact of change resulting from North America's unconventional gas revolution. 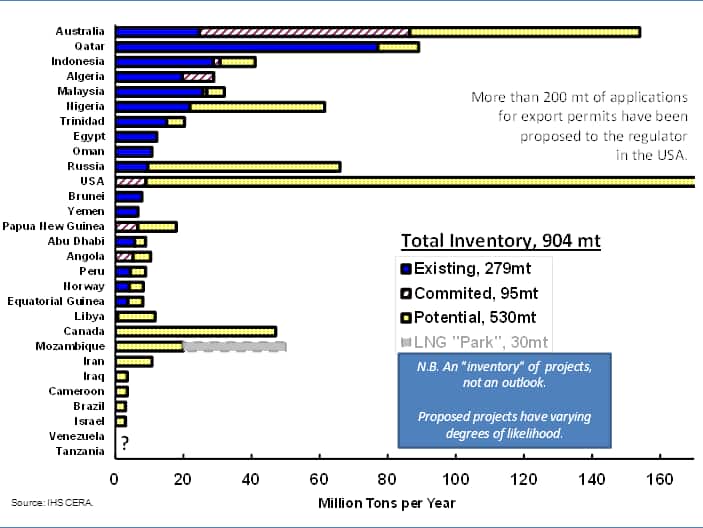 According to estimates made by the Global LNG team at IHS CERA, the global market requires 60 million tonnes p.a. of capacity to be progressed to a Final Investment Decision (FID) by 2016 for start-up by 2020 if current tight market conditions are not to be repeated. Looking further into the future, the Global LNG team estimates that total liquefaction capacity will have to be around 600 million tonnes p.a. by 2030 - a doubling of today's capacity but far lower than the current inventory of potential LNG supply projects.

Not all LNG projects will take FID – but what happens if over-exuberance prevails? Clearly, the inventory of potential LNG export projects far exceeds market demand forecasts which are also subject to considerable uncertainty for several reasons:

It is evident from the IHS Global LNG Project Ranking Matrix only a few of the LNG supply projects are close to taking FID currently and many of the proposed projects have much to do before FID can be considered. The road ahead for most of these projects will be long and tiresome - considerable sponsor stamina and willpower is going to be needed to progress these to construction.

Gas pricing by oil indexation may not survive. Events of the last few years have demonstrated that the global LNG market is currently in a period of transition. Pricing mechanisms that link the price of gas to that of oil (so called oil indexation) are disappearing from long-term pipeline gas and LNG supply contracts into Europe and are coming under increasing pressure in Asia with the emergence of LNG supply contracts that are priced against a traded gas hub such as Henry Hub in North America and the National Balancing Point (NBP) in the UK. LNG supply from the United States is already setting a new global competitive price reference against which potential new LNG supply projects must compete, but if project development exuberance prevails to the extent that supply is in excess of demand, then subsequent change will be more dramatic.

The IHS study The New Map of Global Gas, concludes that oil indexation can remain dominant as a pricing mechanism for Asian term supply of LNG if development of LNG export capacity from North America occurs at an orderly or restrained rate. However, these pricing dynamics come under considerable pressure if over-exuberance prevails. Of greater significance is the impact that the IHS "Gas Export Surplus" scenario has on spot LNG and gas prices around the world with the consequence of classic commodity "boom-bust" cycles and producers/marketers having to compete on a cash cost of supply basis during times of plentiful supply. The market maker or market breaker impacts from the North America shale gas revolution hinge on how the decisions and speed of development roll out.