The North America investment wave hits landfall – what about the second wave?

Financial performance in petrochemicals continues to see healthy earnings. While 2014-2015 brought exceptional margins to North American petrochemicals with high crude prices and low gas prices, the plunge in crude prices in 2015 amid political and economic uncertainty created a pause in new project decision-making. Global financial performance in petrochemicals for 2017 is the best in a decade, averaging $200 per metric ton on a weighted average cash earnings basis, with North America averaging nearly $300 per metric ton. However, the pause in new projects decision-making in the 2015-2017 timeframe will exhibit itself in near term higher operating rates as demand continues to grow and excess capacity is consumed. In the olefins market, for example, a cycle peak is likely in the early 2020's followed by a potential down-cycle as significant new capacity decisions are under consideration with lags of five to seven years before the results of those decisions are reflected in the market.

North America's second wave of new capacity expansions is faced with a number of uncertainties and challenges ranging from relative competitiveness of energy and feedstock costs, competitiveness of global supply, to economic and political forces.

Global competitiveness of supply is also determined by the relative capital cost of construction. With the US Gulf Coast at a capital cost index of 1.0, China is achieving a capital cost index below 0.7 and in some cases as low as 0.5. China's productivity of capacity execution with proximity to a large hub of demand growth creates a significant advantage versus North American exports. In addition, much of China's next wave of chemicals consists of large scale integrated refinery-petrochemical complexes creating scale and flow-through refinery economics. Further, North America's challenge in the next wave of capacity expansion is a significant improvement over the most recent performance where many projects experienced delays and project cost overruns.

North America's next wave of capacity exceeds domestic demand requirements, requiring producers to export incremental supply. This export position exposes producers to not only the economic uncertainty of their home market but also to the health and stability of economies in their target export markets, including South America, India, and China. As North America becomes a large net exporter of petrochemicals, unrestricted trade is critical. This is in the face of increasing protectionism in a number of petrochemical markets. 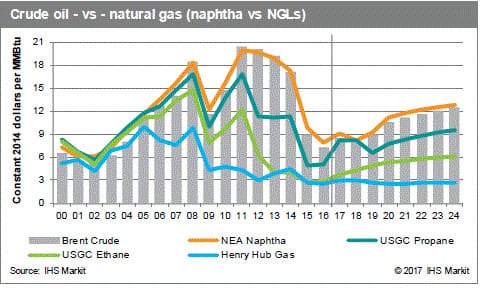 A second wave of significant investment in North America petrochemicals is expected with strategic decisions needed in 2017-2019. Winners will leverage the full benefits of the region with advantaged feedstocks and energy, a critical mass of well-developed infrastructure, a balanced portfolio of customer markets, and integrated scale. Operational flexibility is the critical element as producers embrace across their enterprises abundant and diversified feedstocks from gas to liquids on the upstream with diversified customers and market access across consuming derivatives and downstream uses. The large scale complex North American refineries will also provide another avenue of diverse competitive feedstock supplies for petrochemicals. Finally, winners continue integration throughout their value chains to achieve low cost and baseload demand for their production units. The extensive diversity on petrochemical feedstock supplies and well developed large end-use markets along with North America's proven innovation engine creates a market that enables high flexibility in an ongoing uncertain environment.