The prolific, highly economic unconventional oil sub-plays in the Permian basin and other unconventional oil plays such as the South Central Oklahoma Oil Province (SCOOP) and Sooner Trend Anadarko Canadian Kingfisher (STACK) were focal points in the oil drilling activity boom, bringing associated natural gas and NGLs. Other unconventional oil plays like the Bakken and Niobrara shales have also provided incremental associated natural gas and NGL volume and production support. This trend is expected to continue over the next three to five years, necessitating infrastructure capacity additions.

Correspondingly, pipeline capacity constraints developed for crude oil, natural gas, and the NGL infrastructure. Upstream companies' volumetric needs do not always match midstream asset capabilities, and at times infrastructure investment lags upstream activity. For example, in the first half of September 2018, ethane prices spiked from 41 cents per gallon (cpg) to 61 cpg over a two-week period, thanks to a shortage of NGL fractionation capacity in Mont Belvieu. Midstream capacity additions are needed across the NGL supply chain, connecting increasing supplies with rising demand. Figure 1 illustrates new NGL supply chain projects, which are described in the following sections. 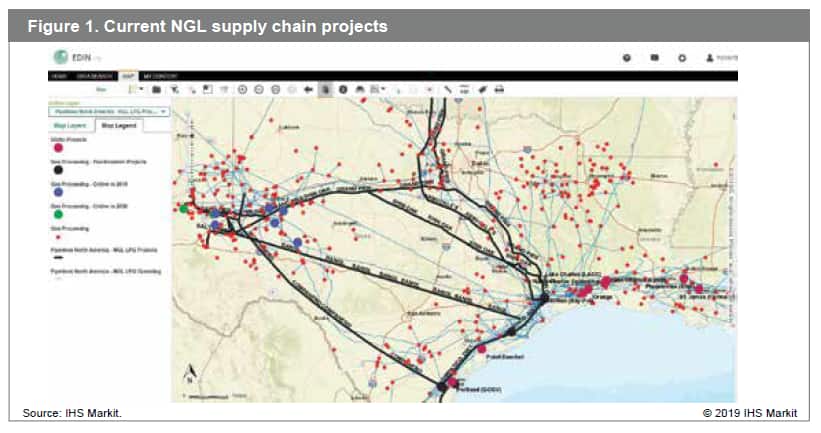 NGL produced in the Permian and delivered to the US Gulf Coast will be greatly affected in the coming months by major projects from Enterprise Products Partners, Targa Resources, and EPIC Pipeline. 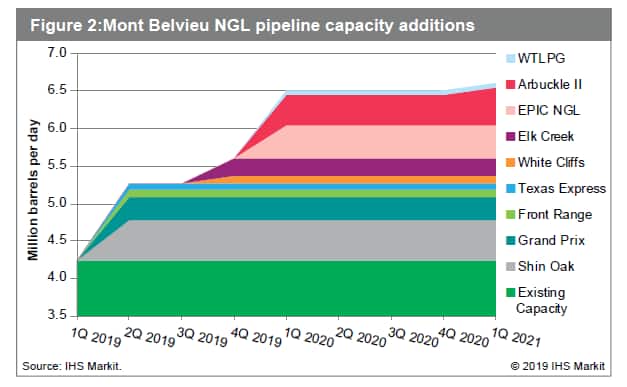 Soaring crude oil transportation demand led EPIC to designate phase three for crude service until construction on the EPIC Crude Oil Pipeline and first EPIC NGL fractionator is complete in early 2020. A second fractionator is expected in service in 2021. Both fractionation trains are in Corpus Christi and have capacities of 100 MBPD each.

DCP Midstream - DCP completed major projects in the DJ Basin in 2018. The 200 MMscfd Mewbourn 3 and 300 MMscfd O'Connor 2 gas plants will increase the company's processing capacity in the region to more than 1 Bcf/d by second quarter 2019. DCP plans to expand its existing NGL pipeline capacity at the same time. The partnership announced a 100 MBPD expansion for the Front Range pipeline, bringing total takeaway to 250 MBPD. An expansion of 90 MBPD was also announced for the Texas Express pipeline, bringing nameplate capacity to 370 MBPD. In May 2018, DCP announced that the Southern Hills NGL pipeline will connect the DJ Basin to Cushing, Oklahoma and beyond via the White Cliffs pipeline. The White Cliffs pipeline, formerly in crude service, is expected to have a total capacity of 90 MBPD and is scheduled to be in service in fourth quarter 2019. White Cliffs is expandable to 120 MBPD.

ONEOK, Inc - ONEOK announced multiple new infrastructure projects in 2018 with a capital expenditure of over $2B, including: