Terrorism activity has changed, with attacks typically causing no or little property damage but inflicting significant losses to civilians and businesses. In the aftermath of these incidents, small-and-medium sized businesses have suffered significant financial losses, either because the authorities have denied access to their premises or because customers visit less frequency due to the perception of risk associated with the area in which they are located. Insurance policies are available to protect against the financial losses incurred during a terrorism incident, but typically only when property damage has been incurred. This has resulted in a large gap between the insured loss and actual cost of attacks to business. For instance, in response to the attacks on Borough Market in June 2017, the UK in February 2019 finalized new legislation that, for the first time, permitted the provision of insurance coverage for terrorism that causes non-physical damage business interruption (NPDBI). Insurance coverage more broadly is now trying to cover NPDBI to protect businesses. However, there lacks a baseline of data and knowledge of the NPDBI-related impacts that occur during and in the aftermath of a terrorist attack.

IHS Markit has examined seven case studies of terrorism incidents in North America and Europe since 2013, across a range of different attack types that have resulted in NPDBI. Drawing on the rapid collection of open source data to verify NPDBI-related impacts to businesses, our methodology mapped the footprint of business interruption and how this changed in the aftermath of an attack, and classified these impacts into three distinct types:

Mapping the footprint of business interruption

Using techniques in geospatial mapping, we were able to map the approximate area denied access by the authorities and how this changed over the course of a terrorism. Below is the business interruption footprint that followed the response to the attack on Borough Market. 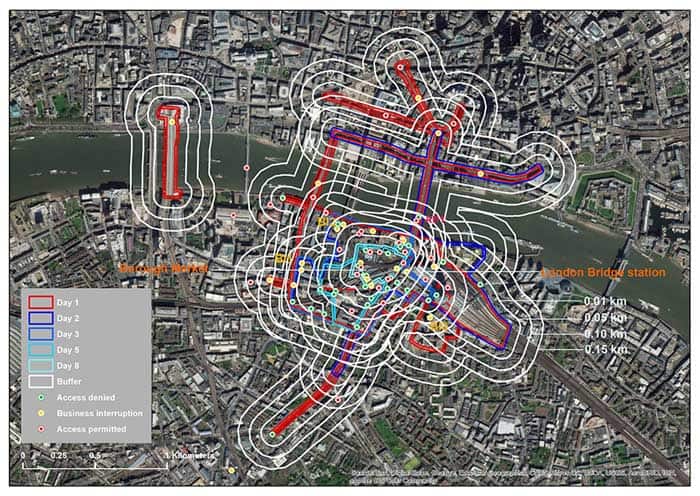 Examples of the evidence that was collected and verified (above) include:

Although steps have been taken to improve insurance coverage, our analysis indicates that the NPDBI-related losses likely to be incurred by business vary according to a variety of factors, but typically exceed the limits of the coverage currently provided, particularly in terms of coverage duration and the geographic area affected. Most notably we found that: 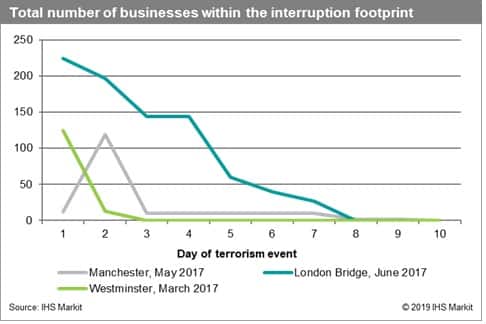 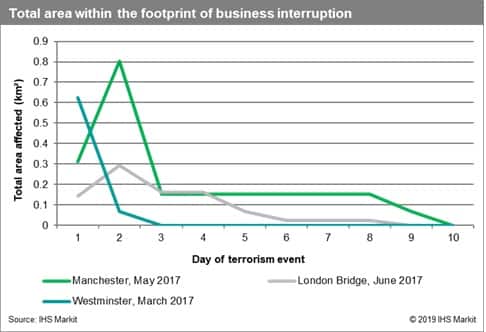 As the impacts of terrorism attacks in North America and Europe continue to primarily not relate to property damage, it will prove increasingly important for local businesses to be able to seek adequate protection that insures them against financial losses.