Nissan just opened a new plant in Brazil, with capacity to make 200,000 light vehicles per year. Nissan has built the Livina/Grand Livina MPVs and the Frontier pick-up in a plant owned by Renault in the southern part of the country. With the new facility, they will make the March and Versa in Brazil. Previously, they were imported from Mexico, but when Brazil set limits on vehicle imports from Mexico in 2012, they had to change their strategy.

The new factory, which was built in 36 months, is critical for Nissan to reach its objective of 5% market share in Brazil by 2016. During the opening ceremony for the new facility, Brazil born Carlos Ghosn, the Renault/Nissan alliance CEO, reinforced that Nissan wants to be the best selling Japanese make in Brazil. Last year, Nissan's market share was 2.2%, behind Toyota (4.9%) and Honda (3.9%).

That is not an easy task considering consumers purchases are slowing and more OEMs are entering the market, increasing competition. Chery and BMW will also open factories in Brazil this year (BMW does not compete against Nissan). Next year, Fiat and Honda start making light vehicles in a second plant in the country. 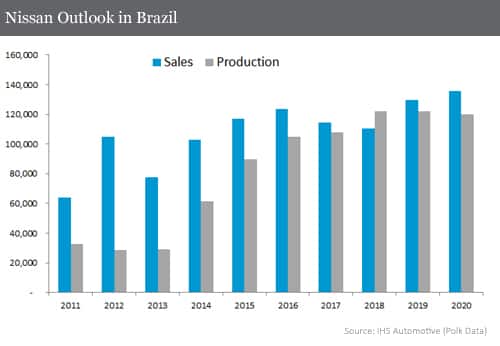 There is no doubt that the situation in South America is very challenging. Ghosn said that the potential of the Brazilian market justifies the investment of US $1.5 billion, including an engine plant. IHS Automotive has just reduced the production forecast for Brazil in 2014 by 6.6%, to 3.2 million light vehicles, compared with a 9.6% reduction for Argentina and 73.6% for Venezuela.

The first Nissan to be made at the new plant in Resende is the March, followed by the Versa later this year. We anticipate that Nissan's new B-CUV, based on the Extrem concept car, is also going to be built there. It is slated to be the official car of the 2016 Olympic Games, which will take place in Rio de Janeiro. Nissan cannot use the World Cup, which Brazil hosts this year, for its marketing efforts because Hyundai sponsors Fifa and Volkswagen sponsors the Brazilian national team.

Nissan is still a very small OEM in South America and there is potential to grow. In 2012, for example, the Versa and the March reached the dealer network from Mexico and boosted the make's sales. Consumers are eager for novelties, what we can observe by the success of the Hyundai HB20 and, in a lesser extent, Toyota Etios and the March itself. There is also potential to export vehicles to Argentina, where the market should recover in the long term. Our light vehicle forecast shows a drop of 30% for Argentina's sales this year, but a growth of 8.5% in 2018.

If we look at how aggressive Renault has been in the Brazilian market, there is no reason to doubt Ghosn's words and his plans for Nissan.