Newbuilding deliveries could spike in Q1

Newbuilding deliveries are set to spike in the first quarter, particularly in the tanker and dry bulk sectors where orders have been steady in the face of stiff competition between the yards.

According to IHS Markit data, by the end of March 13 million dwt in tankers is scheduled for delivery. Even if 25% of these deliveries are delayed that will still leave close to 10 million dwt on the water, double the 5 million dwt scrapped over the past two years, 2015-16. In the last six months of the year about 15 million dwt are expected to be delivered, about 37% of the 39 million dwt total.

However, scrapping of dry bulkers has been far more prevalent with close to 59 million dwt taken out of commission.

With neither the tanker nor dry bulk markets expected to boom this year vessel owners, particularly of larger tankers and bulkers, may struggle to make ends meet. In the dry bulk sector owners have pinned their hopes on the continuing development of Chinese infrastructure to drive the bulk carrier sector. However, the crude market is expected to slide following OPEC's decision to cut output by 1.8 m bbl/d from the beginning of this year.

By the end of January Allied Shipbrokers of Greece was reporting corrections in prices for both tankers and dry bulk carriers, particularly in the larger sizes. In dry bulk the stall on the Pacific, due to the Chinese New Year holidays, was not offset by increased activity on the Atlantic, meaning that rates tumbled.

In the tanker market Allied said that sluggish demand in the east has contributed to a sharp correction in rates. With the level of new capacity expected within the next month the markets appear unlikely to recover soon.

Container shipping is also due a boost to its capacity with around 170 ultra-large containers ships (ULCSs) set for delivery this year. A total of 1.69 million teu is expected to be added to the global fleet. Around 800,000 teu has been scrapped in the past two years.

Unlike the tanker and dry bulk sectors, however, the delivery of container ships is fairly evenly spread throughout the year, peaking at 191,848 teu in April with a further 165,774 teu scheduled for delivery in July.

Braemar ACM believes that it is unlikely that there will be further orders for ULCSs because the consolidation in the industry means that operators will need to take stock of the vessels that are already in their expanded fleets.

Nevertheless, a Braemar ACM researcher said, "Even with the 30% deferral rate there are 1.2 million teu of extra capacity expected this year. Net [container] fleet growth is expected to be 5% this year compared to 1.2% last year."

He added that brokers had expected some deliveries in January, as the deferrals from 2016 were delivered, but the broker had seen no ULCS deliveries last month. "A heavy delivery schedule is likely to weigh heavily earnings," he added, "but we'll know more by the end of March".

South Korean yards have seen something of a resurgence; both South Korean and Japanese shipyards have benefited from the ordering spree with the top five yards for container ship deliveries this year coming from Japan or Korea. The top five yards for tanker deliveries this year will be from China and South Korea while bulk orders have predictably gone to the Chinese, according to IHS Markit. 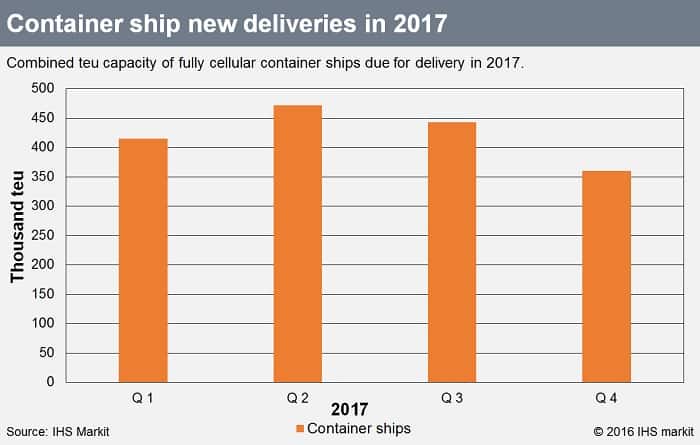 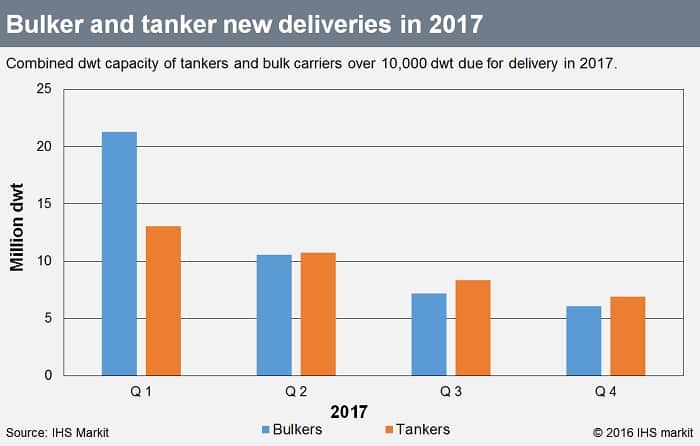 On January 15th, the highly anticipated #PhaseOne between #China 🇨🇳 and the #US 🇺🇸 was signed. What does this mean… https://t.co/kIuAPerw8d

Guyana's first shipment of around one million b/d of #crudeoil is heading to Galveston. @IHSMarkit Commodities at S… https://t.co/vSM69l4AAt

Over 815 million metric tons of #coal was exported in 2018 by the two largest exporters #Indonesia and #Australia.… https://t.co/WQ2IP6kNGC