Waymo has announced a new long-term partnership with Jaguar, including an agreement to develop up to 20,000 self-driving i-Pace SUVs in two years. 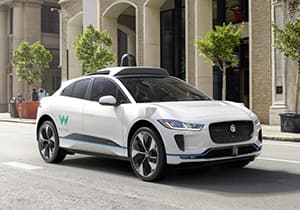 In an announcement in New York just before the start of the New York International Auto Show (NYIAS), Waymo CEO John Krafcik announced the company's newest partnership. Waymo and Jaguar have entered into a multi-year partnership, centred on Waymo putting 20,000 self-driving Jaguar i-Pace sport utility vehicles (SUVs) into its fleet in the next two years. Krafcik also committed to start testing in 2018 and deploying them in service in 2018 as well; the i-Pace will first be deployed in the Phoenix (Arizona, US) area, where Waymo has been running an early rider programme with its current fleet of Chrysler Pacifica Hybrid minivans, including operating without a driver in the driver's seat since October 2017.

Waymo CEO John Krafcik also discussed Waymo's overall target, saying that the company's goal is to bring the technology to "everyone, everywhere," driving the company's effort to build businesses in ride-hailing, personal use and commercial goods transport. Once the Waymo-Jaguar i-Paces are deployed, users will be able to go anywhere in the 600-square-mile Phoenix area; Waymo did not, however, provide clarification on the next phase of the programme. It is unknown yet which cities will be next or how soon Waymo will deploy outside of Phoenix. Waymo's ultimate goal, Krakcik said, is "to provide a self-driving car tailored to every trip and every purpose." Krafcik noted that in working with Jaguar, they have a production-ready vehicle and self-driving technology that is ready today. Perhaps more notable in the wake of the recent Uber self-driving fatality, Krafcik focused on Waymo's near-decade of development, with 5 million miles testing accumulated on public roads in 25 cities, as well as 5 billion miles testing in simulators and on a private test track that helps cars learn from 20,000 different scenarios. 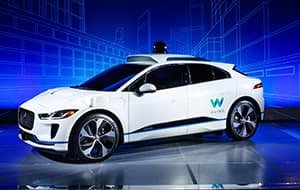 Waymo counts the Jaguar as its sixth self-driving vehicle, noting that the company has applied its self-driving technology to five "form factors" to date. This includes a small car, the Lexus RX SUV, Google's Firefly, the Chrysler Pacifica Hybrid minivan and the Class 8 tractor trailer Peterbilt. Krafcik is leading the company to expand and scale quickly. "We can do this because we're building the driver and this same driver can be adapted for all kinds of vehicles," Krafcik said at the event. He also characterised the Jaguar relationship as a long-term partnership, noting that Waymo is "looking forward to exploring more opportunities" with Jaguar Land Rover. As to why it has selected the i-Pace, Krafcik noted that the size of the vehicle makes it perfect for cities, that the electrical architecture is all new and "perfect for our technology," that the 240-mile EV range will enable the SUV to drive for a full day, and that the new architecture is designed with the latest safety standards. In addition, he noted that the graceful vehicle will provide a "safe and delightful experience for our passengers… [Waymo can] make this experience accessible to everyone." He also noted Jaguar Land Rover's "crack engineering team" and that the company is dedicated to safety and shares a similar vision to Waymo.

Jaguar Land Rover CEO Dr Ralph Speth also spoke at the event, and also referred to the i-Pace execution as the first result of a new type of partnership between the two. Speth said, "Moving required boundaries cannot be done in isolation by a single company anymore. Breakthroughs, process can only be made when government, academia, and the industry across many sectors work closer together. So you look for partners who share your dreams. People who embrace the passion of your own ambition, who add value to your own imagination and who are leading in their respective fields." The Jaguar executive notes that the i-Pace becomes the first fully electric self-driving premium SUV in the world. He also characterised the investment as part of its commitment to the US market.

The announcement is a notable step forward in Waymo's development of a self-driving fleet, and moving forward with a premium brand further positions the potential of a self-driving fleet as something to aspire to participate in as well. For Jaguar, this associates its brand with key technology without the expense and time of developing it internally. IHS Markit forecasts that the autonomous vehicle market will reach 33 million units globally in 2040, with the majority of growth after 2025.

IHS Markit expects that Waymo's decision to move forward now is related to the company's confidence in the depth and robustness of the testing and development processes it has so far undertaken. Throughout the company's development process, it has largely been transparent in communicating its progress. While Krafcik was recently quoted as saying that the company is not ready to move to Level 5 self-driving technology, for the Level 4 environment, Waymo's more than 5 million miles of public road testing without major incident, in addition to its simulations and private track testing, gives it confidence to move forward. The company is expected to roll this vehicle out somewhat cautiously, beginning with Phoenix, Arizona, where it has logged a number of its on-road miles and is already testing with the general public, and no confirmation yet of other markets.

The Jaguar i-Pace appears well suited to Waymo's needs, with a long-range battery and the capability for over-the-air updates, and certainly the order for 20,000 units will assist Jaguar's development costs. Prior to the announcement, IHS Markit forecast annual production of the i-Pace in the range of about 22,000 units per year; the order from Waymo will have a significant impact on the number of i-Pace SUVs Jaguar builds. If the relationship goes well, there could be potential for future Jaguar products. However, Waymo's intent to have a vehicle appropriate for every trip suggests that the company may also look to vehicles at other price points over time - although the selection of i-Pace also reflects that Waymo will require vehicles with a significant amount of on-board technology already part of the architecture. The selection also illustrates that Waymo is dependent on automakers' ability to execute on creating a vehicle with the image and content that its riders will interact with while being driven. The speed of deployment will be dictated by the engineering and development work left to be done, but Waymo has a tendency to make announcements that it knows it is capable of meeting.

The Jaguar i-Pace shown at the event previewed how the Waymo equipment is yet again further integrated into the vehicle. Both brands are prominently displayed, and the Waymo i-Pace is a similar white to what the company uses for the Pacifica fleet, as Waymo is also looking for a way to ensure its vehicles are easily identifiable from other Jaguars-aside from the extra sensors.

Waymo's efforts with Jaguar are in addition to its ongoing work with Fiat Chrysler. Waymo was approved by the state of Arizona to operate its ride-hailing service in the state and recently announced its next pilot city will be Atlanta. In addition, Waymo has set up an arrangement with US dealer network Autonation to help support maintenance of its products.