Slower growth could be in part linked to supply constraints and further COVID waves from the Delta variant. Firms' backlogs of work consequently rose globally at the fastest rate since 2004 in a sign of supply running behind demand to a worrying extent. Prices consequently rose sharply again, hinting the recent spike in inflationary pressures has yet to peak.

The global economy continued to expand at a solid rate in July, according to the JPMorgan Global PMI™ (compiled by IHS Markit), albeit with the rate of growth cooling further from May's 15-year high to the slowest since March. The expansion took the recent run of growth into its thirteenth consecutive month. 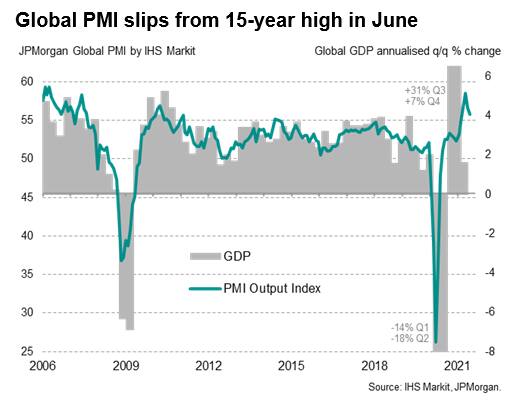 The service sector led the upturn for a fourth successive month, primarily reflecting the further opening-up of various economies from COVID-19 containment measures. On average, global COVID restrictions were eased in July to the lowest since the pandemic began, according to IHS Markit's Containment Index. Consumer services reported especially buoyant growth, reflecting the opening up of tourism, travel and recreation activities in many countries. 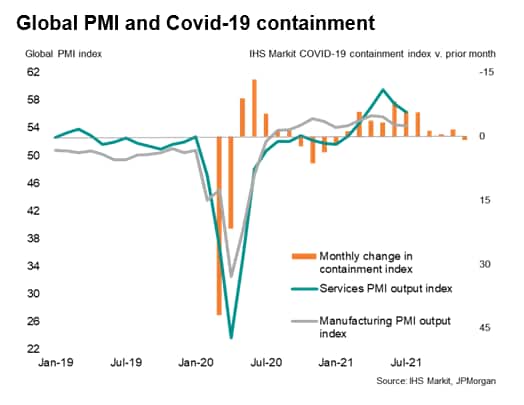 However, rising concerns over the Delta variant were often cited as having contributed to a slowing of service sector growth for a second month in July, and also dampened optimism about the outlook to a seven-month low.

Manufacturing meanwhile continued to expand at a rate well above the survey's long-run average, though the pace of expansion moderated for a third successive month as the Delta variant and supply-side constraints, notably input shortages were often blamed for slower production growth.

The worsening supply picture was highlighted by the manufacturing PMI's suppliers' delivery times index, which showed lead times lengthening globally at a rate unchanged on that seen in June, which had in turn been the most severe ever recorded since PMI data were available in 1998. Production downturns were especially commonly seen in COVID-hit APAC economies with low vaccination rates, once again hitting the shipment of exports to the rest of the world. 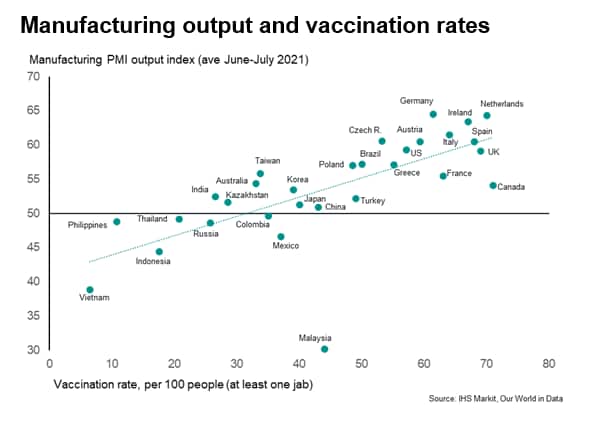 Service sector companies also often reported suppliers' delays having hampered growth, while also noting labour shortages in many countries, such as in the US and some parts of Europe.

The combination of strong inflows of new business and supply constraints led to a rise in backlogs of work across the manufacturing and services sectors of a magnitude not seen since 2004. Not only did these supply constraints contribute to rising backlogs and a slowing of global growth, input cost inflation also accelerated as companies paid more for raw materials and components.

Global input cost inflation across both manufacturing and services consequently ticked higher in July, registering the second-fastest rate of increase for 13 years after May's recent peak.

Selling price inflation meanwhile eased slightly, though likewise remained among the highest seen since the global financial crisis as companies passed higher costs on to customers amid strong demand. 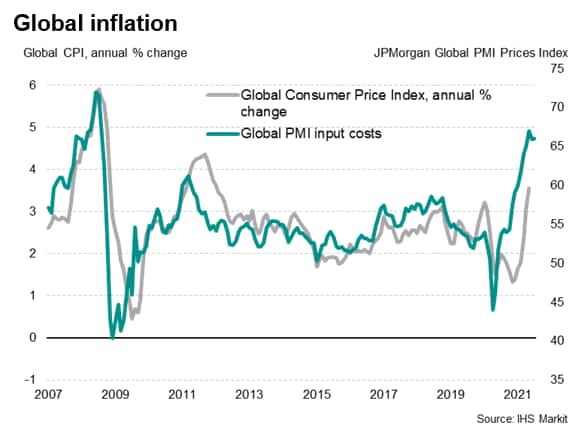 While the rate of input cost and selling price inflation stayed below May's recent peak, it clearly remains too early to discern a turning point or peaking of global inflationary pressures, especially given the worsening supply situation in July.

The July data serve as a reminder that the path of the virus and vaccination rates remain critical to the functioning of supply lines, and will dictate the balance of supply and demand globally in the coming months.