After an already sluggish 2019, 2020 proves to be the most challenging year on record for the global economy. The COVID-19 pandemic destroyed hopes for a strong global upturn.

By mid-September according to WHO the number of confirmed cases reached 30.7 million globally and the number of deaths is approaching one million. From 14 through 20 September, there were almost two million new cases of COVID-19, which represented a 6% increase compared to the previous week, and the highest number of reported cases in a single week since the beginning of the epidemic.

COVID-19 pandemic is the worst health crisis in more than a century and potentially without precedent if we take the globalized nature of the current economy. It a simultaneous supply and demand shock that led to the global recession and unprecedented contraction in global trade (affecting both the export potential of nations and their demand for imports). The contraction is by now far larger than the effects of the global financial crisis in 2008-09 (referred to as the Great Trade Collapse) or any other recent health crisis (e.g. SARS, Ebola, or MERS). The first top economy adversely affected was China followed by other East Asian countries and India, the situation then deteriorated globally in March in line with the spreading pandemic.

The contraction in trade continued well into Q2 with most countries reporting massive declines with April/May being the worst months on record. Without any doubt, Q2 of 2020 was the worst quarter on record for global trade and this is very likely to apply to 2020 as a whole.

The direct trade effects are related to direct supply disruptions hindering production (local/regional lockdowns / forced production stoppages), increased transport cost due to implementation of stricter rules, supply-chains contagion effect which amplified the direct supply shocks (manufacturing sectors in less-affected nations found it harder and more expensive to acquire the necessary imported inputs from the hard-hit nations) and finally to demand disruptions due to a decrease in the aggregate demand (recession), and precautionary or wait-and-see purchase delays (delayed purchases & investments).

Countries most adversely affected are the nations struck the most by the pandemic itself as well as countries most dependent on the trade with these nations through export/import linkages (forward/backward linkages in global value chains, GVCs). Increased defragmentation of production chains and certain management principles (just-in-time and lean production with low stockpiles of inputs) increased the susceptibility of the global economy to the shock.

The impact is, however, asymmetric due to the nature of the individual (sector-level) value-added chains. Some GVCs dependent on adversely affected regional or global hubs such as China, Italy, Spain, or Germany were more affected (e.g. automotive industry, electronics). Some industries or sectors gained in the crisis (e.g. pharmaceuticals, IT services).

Individual countries and groups of countries once again took unprecedented steps to mitigate the crisis, which could have similarly to 2007-08 negative consequences for public finances and global debt levels. This increases the probability of the W-shape scenario (the initially assumed V-shape with a strong recession followed by sharp recovery is already highly unlikely).

The pattern of trade collapse reflects the spread of the pandemic and the steps taken by individual states. It is evident that the overall impact will depend critically on the duration, severity, and spatial pattern of the pandemic. The remedy would be the introduction of a successful vaccine or global herd immunity.

Unfortunately, the spread of COVID-19 resembles the infamous Spanish Flu pandemic of 1918-19 that lasted two years and had three major waves with the second one particularly sinister. The incoming data provides the first signs of the second wave in a growing number of countries. The economic impact will now depend on actions taken by states - judging from the overreaction in spring they are unlikely to introduce tough and economically harmful measures unless the situation significantly deteriorates (e.g. Israel recently has reintroduced a three-week long national lockdown).

We already understand that the impact of a pandemic won't be limited in the short run - it will have long-term consequences as well. We are likely to observe more pronounced adjustments to GVC/trade patterns (trade diversion effects) the larger, the longer the pandemic lasts.

It has already led to an acceleration in digital transformation, adjustments in work patterns, and an increase in the role of RPA/AI in numerous sectors. Health security issues are going to be taken more seriously are likely to modify decision making of MNEs and in particular, this could affect their location choices and thus lead to the reconfiguration of GVC/logistic chains. We are likely to see a trend towards onshoring or backshoring, more nearshoring, and thus the transformation of GVC towards more regionalized value chains. Reversal from globalization is however unlikely.

The growth rate of global real trade value is highly correlated with the growth rate of global real GDP. At the moment of crisis, trade reacts, however, to a greater extent that the GDP itself thus the downturns and recoveries are more pronounced. In general, trade reacts with more volatility to significant macroeconomic shocks in comparison to global production or GDP.

The data from the quarterly perspective show evidence that the current global crisis related to the outbreak of COVID-19 caused by SARS-Cov-2 has more severe consequences for the global economy that other recent pandemics such as SARS or MERS and has a more severe impact than the global financial crisis of 2007-08. 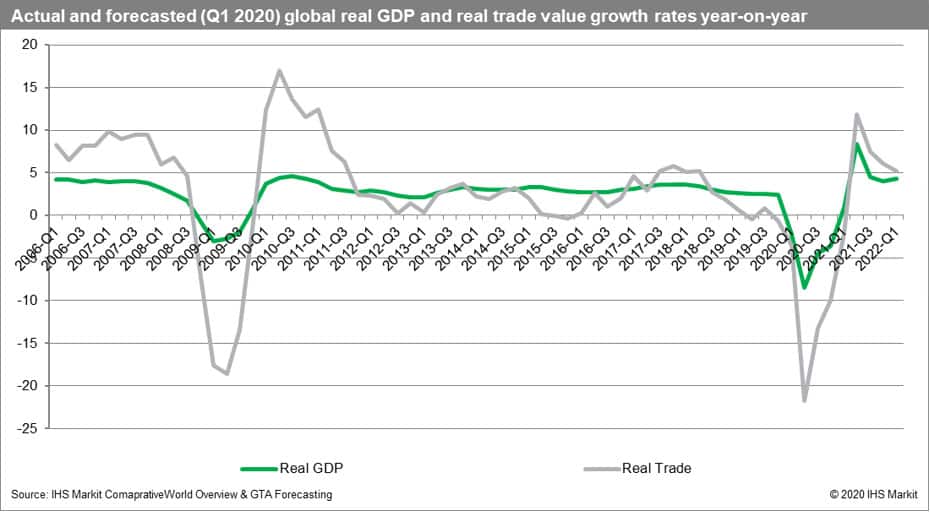 The most recent GDP quarterly forecasts of the IHS Markit Comparative Industry division show that the decline should have reached the bottom in Q2 2020 with a strong recovery predicted now for 2021 Q2 (a delay by a quarter). Thus, at yearly time intervals, we are likely to see the V-pattern of the crises assuming we can bring the pandemics under control within 2020. If, however, other waves of the pandemic materialize, then different, more negative scenarios would have to be adopted with a U-shape or W-shape emerging.

The forecasts for the top ten economies indicate that China is the only economy already growing in 2020. India should recover in the Q1 of 2021 followed by other economies. It is also worth stressing that the current crisis, in contrast to prior health crises, is mostly driven by the group of the advanced economies responsible for most of the global trade and manufacturing production thus the impact is significantly larger. Emerging states with lower levels of participation in the global economy and global value chains are likely to be less affected. 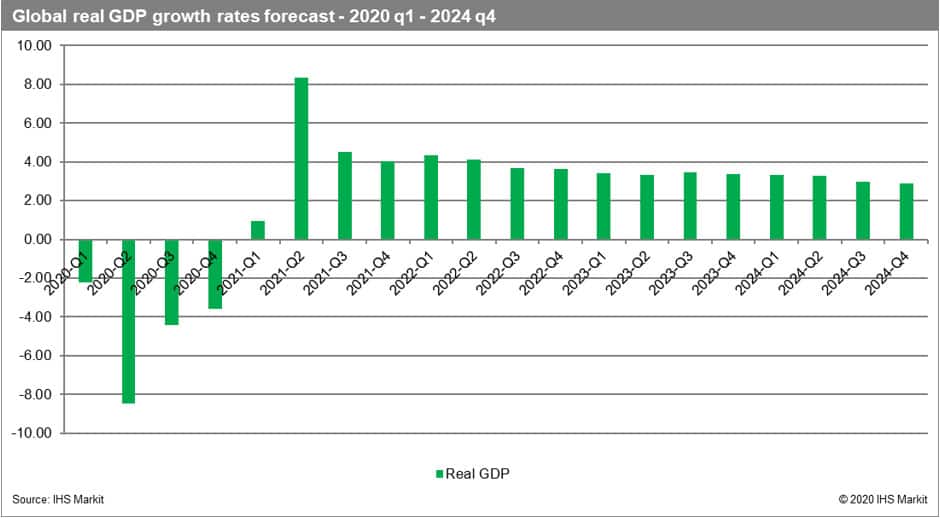 The PMI new export orders adjusted have collapsed in April and May 2020 with prior levels already below the benchmark value of 50.0 points indicating a major contraction in global manufacturing and services trade. The readouts reached 21.8 and 29.9 for services and 27.1 and 32.3 for manufacturing. The values were significantly beneath the 2008-09 readouts for both global manufacturing and services showing the actual depth of the crisis and the impact on market confidence. From May onwards they are, however, on the increase. 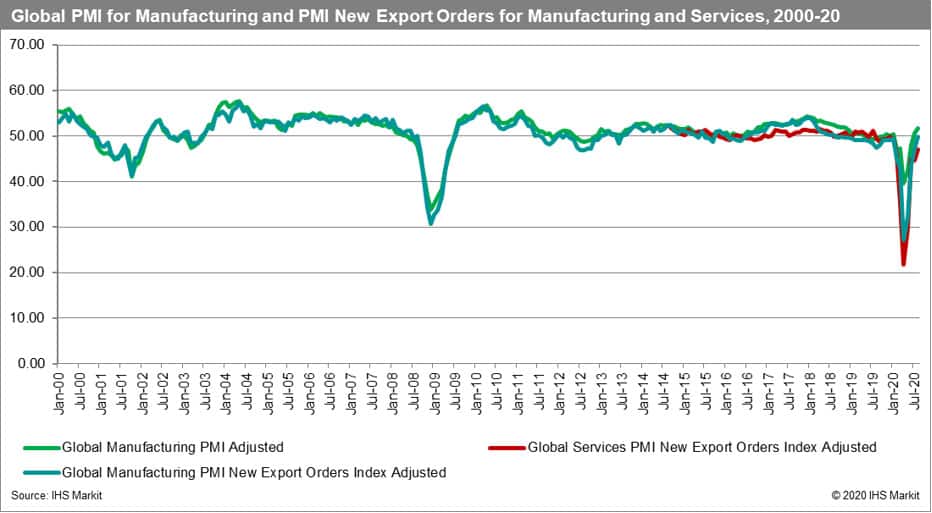 Our new forecast (released on 31 August 2020) incorporating all the new incoming data shows that global merchandise trade is likely to go down in 2020 to USD 16,672 billion or by 12.2% year-on-year (it is an improvement on the previous forecasted values of 16,397.6 billion and a decrease of 13.6% year-on-year). Our estimated contraction in global trade value for the entire of 2020 is close to the results reported by the OECD and IMF and close to the estimated optimistic scenario of the WTO from April 2020.

We now predict a less sharp recovery in 2021 and predict a year-on-year increase in the real value of trade of 5.6% in 2021 and 7.9% in 2022. The predicted CAGR for the period 2021-2030 is however now higher and equals 3.5% (priorly it was predicted to be equal to 2.8%). This is more optimistic and largely depends on the non-materialization of the double-hit scenario in case of a severe second or third wave of the pandemic. The pattern is more of a U shape than a V shape.

Our forecast is close to the "optimistic" scenario for the development of world merchandise trade published by the World Trade Organization. The expected recovery (in 2021/2022), can be strong enough to bring trade close to its pre-pandemic trend (2011-2019) but only around 2030.

The effect in comparison to our last forecast is mostly due to a shift in macroeconomic forecasts delaying the recovery in terms of real GDP growth rates for most of the states to Q2 of 2021 or by a quarter. 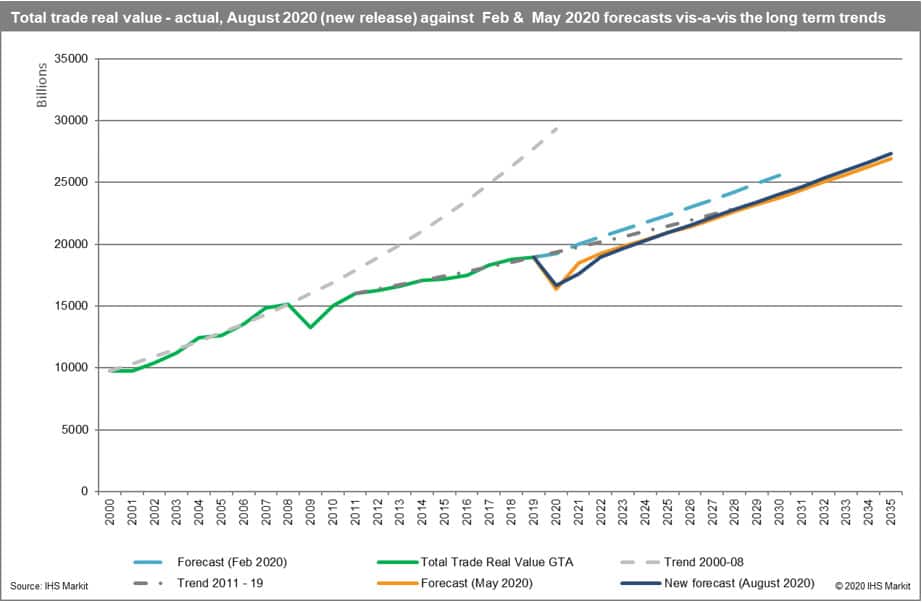 The forecasts should be treated with a large degree of caution. Economic developments will critically depend on the shape of the pandemic curve that at this stage cannot be fully predicted actual results could differ to our forecasts. A strong second wave of the pandemic can force us to accommodate a double or triple hit scenario. The next three months will be crucial and could lead to a modification of our forecast in the next release (Nov 2020).

This column is based on data from Maritime & Trade Global Trade Atlas and GTA Forecasting data as well as other resources of IHS Markit.