The PMI surveys indicated that the UK economy remained broadly stagnant midway through the second quarter. Companies reported that activity, order books and hiring trends were subdued by a combination of weak demand and Brexit-related uncertainty. However, optimism about the year ahead picked up to an eight-month high, in part reflecting an easing of near-term concerns due to the extension of the Brexit deadline.

The IHS Markit/CIPS 'all-sector' PMI fell from 50.9 in April to 50.7 in May, running only slightly above the no-change level and indicative of the economy stalling when compared to official GDP data.

Although service sector business activity gained a little momentum, with growth reaching a three-month high, the pace of expansion remained muted and failed to offset a marked deterioration in manufacturing performance and a fall in output of the construction industry. Manufacturers reported the slowest rise in production since July 2016 while construction output fell at the quickest rate in 14 months. 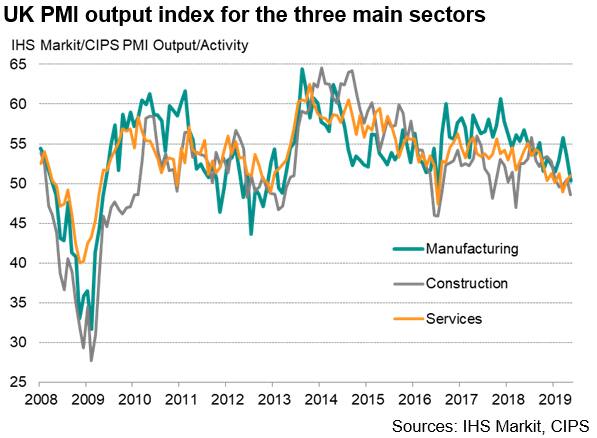 Demand remained subdued, in part reflecting a further fall in orders from abroad. Inflows of new business into the three sectors expanded only fractionally, albeit with the marginal rise representing an improvement on the modest falls in new orders seen in the prior four months. Service sector new business rose for the first time in 2019 to date, but orders for manufactured goods and building work both fell, the latter dropping for a second successive month.

The lack of new work meant companies increasingly ate into previously placed orders to sustain business activity. But with backlogs of work consequently falling in May at the second-fastest rate since July 2016, the surveys brought signs of excess capacity developing. Factories in particular reported a sharp drop in outstanding work, which fell to the greatest extent since March 2013, though service sector backlogs also fell at a steeper rate.

Employment growth was modest as a result of concerns about weak demand and excess capacity, albeit showing the strongest gain in payrolls since November as a result of improved hiring in the service sector. Both manufacturing and construction reported falling headcounts, the latter notably suffering the largest loss of jobs since November 2012. 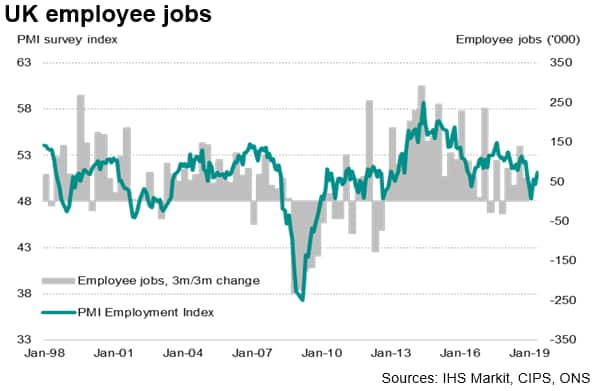 The survey data therefore suggest strongly that the underlying pace of GDP growth has weakened in recent months, contrasting with more buoyant official data. According to initial estimates from the Office for National Statistics, GDP expanded by 0.5% in the first quarter, considerably stronger than the signal from the PMI surveys. However, it would be highly unusual for the economy to not lose substantial momentum in the second quarter given the weakness of the PMI in recent months1. 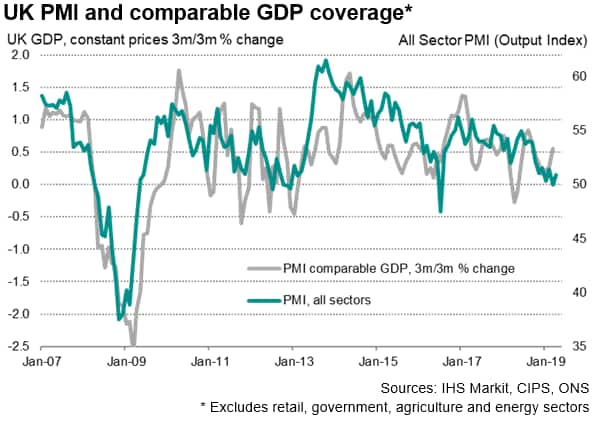 An especially marked turnaround is signalled for the manufacturing sector, where the official data indicated a particularly large (2.2%) upturn in production in the first quarter. The PMI data suggest this surge in factory production reflected a boost from stockpiling ahead of the planned Brexit date of 31st March (and subsequently 12th April), which has since faded. The departure from the EU has now moved to 31st October. 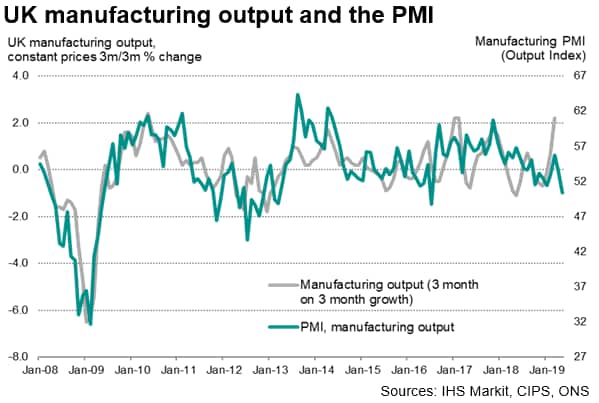 Construction also looks set to act as a drag on the economy in the second quarter, given the sector's recent low PMI readings, leaving only the service sector as making a positive contribution to GDP. 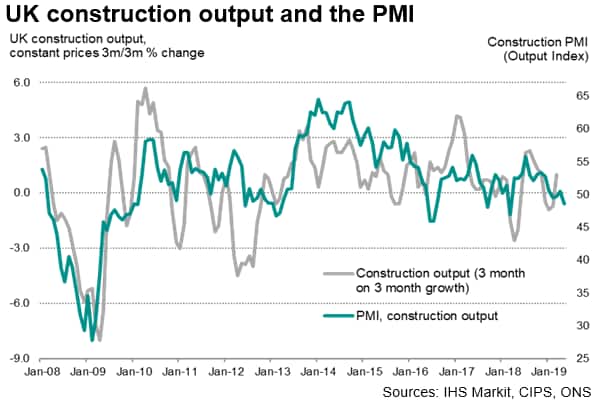 A more detailed analysis of the data hint that households are providing support to the economy, notably via spending on goods and the housing market. In the manufacturing sector, only producers of consumer goods reported any growth of output and order books in May. In the construction sector, only housebuilders reported growth, contrasting with falling building work in the commercial and civil engineering sectors. However, we note that the service sector also saw signs of stronger growth of business services and especially robust growth of computing and IT. 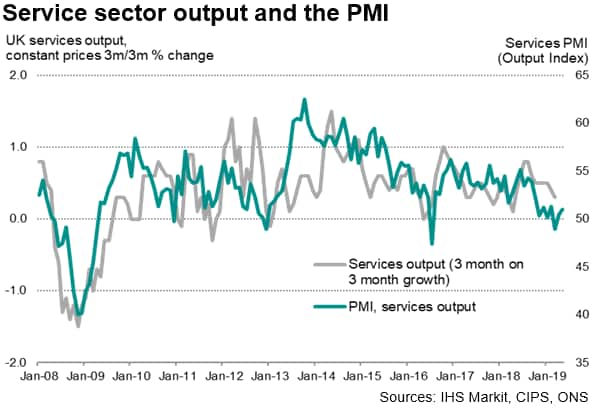 Cost pressures meanwhile ebbed lower in May, although selling price inflation ticked up as firms sought to protect margins. Average input costs across the three sectors rose at the slowest rate since July 2016 as suppliers often competed on price, offsetting some of the inflationary impacts of the weaker exchange rate, higher fuel prices and the recent rise in the minimum wage. 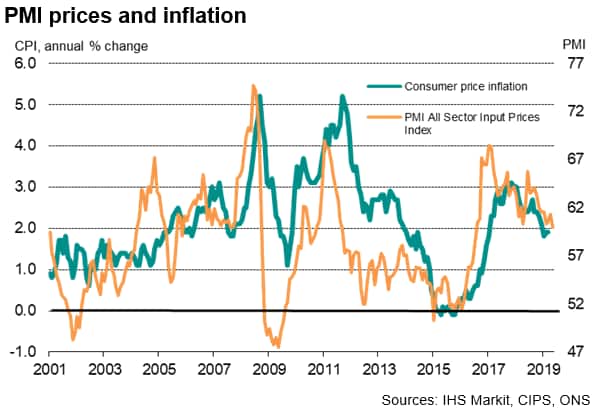 Average selling prices increased at the quickest pace so far this year, however, rising at faster rates in both manufacturing and services (yet remaining below the average rate of inflation seen for 2018).

Business expectations for the year ahead improved in May to the highest since last September, fuelled mainly by optimism hitting an eight-month high in the service sector. Manufacturers remained the most optimistic, however, with optimism also at its highest since last September amid an easing of Brexit-related worries and expectations that a weaker exchange rate will benefit exporters. Construction sector optimism, on the other hand, fell to the third-lowest since January 2013. As a result, overall optimism about the year ahead remained well below the series' long-run average, despite rising for a third straight month. 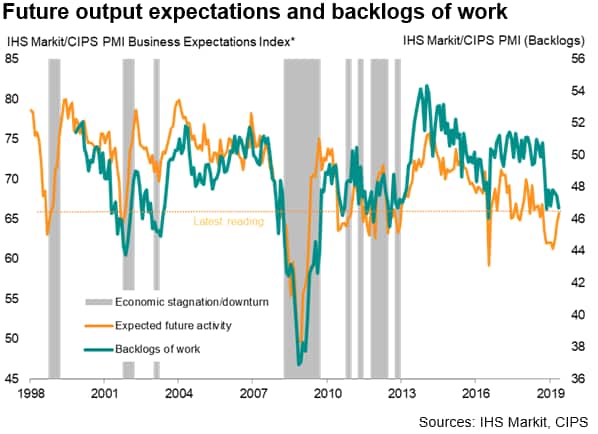 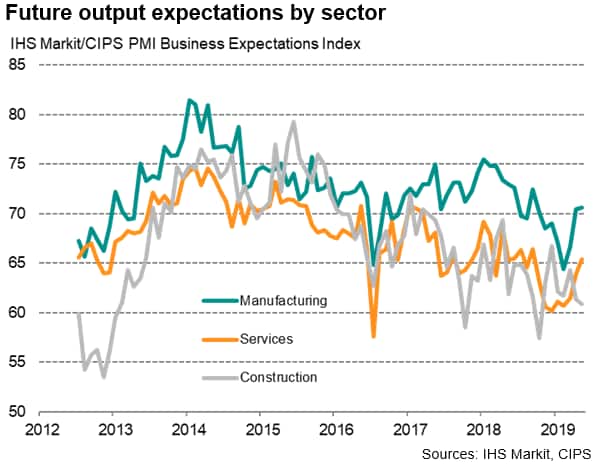 While the upturn in future expectations provides hope of an improvement in business activity growth in coming months, the current situation remains one in which the PMI current activity and price pressure indices remain in territory historically consistent with a bias towards looser rather than tighter monetary policy from the Bank of England. 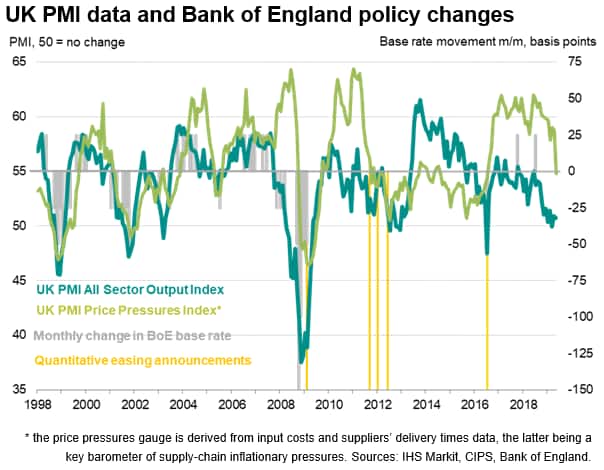 1Only on one occasion, in the immediate aftermath of the 2016 Brexit vote when the PMI fell only very briefly, has a sharp fall in the PMI to 50 or below not reflected a near-stalling or contraction of the economy, albeit in some instances with a delayed effect. Note also that even in the case of the 2016 one-month brief fall in the PMI, the official gauges of manufacturing output and construction output both likewise briefly slipped into decline, alongside a near stalling of service sector activity when a comparable definition to the PMI is used (i.e. excluding government spend and retail). The months after the vote also saw the first fall in private sector employment for five years, corroborating the survey signal of business malaise. On this occasion, a rapid monetary response, quick re-establishment of a working government and a review of fiscal policy all likely helped engender a rapid return of business and consumer confidence, and a subsequent revival of growth.