In the start of the new decade, we have witnessed major macro drivers, including the COVID-19 global pandemic and the Western nations' sanctioning of Russia in response to the conflict in Ukraine. Such sudden, extreme exogenous events have led to rapid regime changes in global markets and have been challenging for portfolio risk managers. In this article, we look at the U.S. credit market using an industry standard tool for assessing extreme risk: value at risk (VaR).

Broadly speaking, VaR-x, for an integer x, is defined as the (100-x)-th percentile of the expected, future portfolio return distribution over some time horizon. Each scenario in the future portfolio return distribution is evaluated using a set of risk factors, where each risk factor is calibrated from its historical returns. The challenge is in projecting the historical risk factor returns data so that they accurately capture the shape of the extreme tails in the portfolio. Although predicting a black swan event is, by definition, impossible, a sensible VaR method should be calibrated to a distribution that best represents the nature of the underlying risk factors.

While the underestimation of VaR can clearly lead to going-concern risks of the portfolio manager, overestimation of VaR can be detrimental to the opportunity costs of holding cash and hedging costs. The point of VaR-x is not to find a bound on all extreme events but rather to filter the worst x percentile events from the rest; for example, the VaR-99 return value should be expected to be breached roughly one out of every 100 evaluations. VaR provides a threshold return level that separates the normal from an extreme regime, and thereby assists risk managers to efficiently prepare for such events.

In what follows, we describe two existing methods for generating VaR scenarios along with their benefits and drawbacks, and then introduce a new, "fat-tailed" VaR generation method that improves on those methods. Finally, we apply these VaR methods to the most recent 10 years of the U.S. credit market index.

In practice, since HVaR relies on very few return values, it tends to move stepwise over time. For example, a week's worth of violent market moves would essentially determine the daily HVaR-99 for the following 2 years. This feature makes it challenging for HVaR to adapt to gradual changes in the volatility regime. Ideally, a scenario generation model should not only consider the tail events within the historical window, but also moderate returns closer to the mean.

To model a smoother tail in the expected return distribution requires a method that (1) projects not only the tail returns, but more moderate returns, and (2) can generate an arbitrary number of scenarios. While there are multiple such methods, the industry standard is the randomized historical sampling method developed by Peter Benson and Peter Zangari[1].

A scenario of the Benson-Zangari method weights the historical risk factor returns with a scaled vector of elements sampled from Gaussian random variables, then an arbitrary number of scenarios can be produced by generating additional Gaussian vectors and applying them as weights to the historical risk factor returns. By consistently applying the same vector of weights across all risk factors, each scenario maintains the correlations amongst all pairs of risk factors. At the risk factor level, the Benson-Zangari method projects the historical (empirical) distribution to a Gaussian distribution with the same standard deviation and zero mean; this follows from the property that normally distributed random variables are closed under summation and have additive variance. These consistency properties coupled with the simplicity and ease of implementation makes the Benson-Zangari method a favorable way to generate scenarios.

Unfortunately, the ability to generate arbitrary scenarios alone is not sufficient to achieve accuracy of VaR. After all, financial returns are known to be leptokurtic; in other words, the tails are fatter and the peak around the mean is sharper than a Gaussian distribution. As such, the Benson-Zangari method, which generates a Gaussian returns distribution by design, will generally underestimate the true VaR.

As an improvement to the Benson-Zangari method, Financial Risk Analytics by S&P Global offers a fat-tailed method for VaR scenario generation. Instead of a Gaussian distribution, this method employs a leptokurtic distribution that better models financial returns, so that a tail parameter of 0<λ≤0.5 allows for users to calibrate the level of excess kurtosis that best suits their portfolio. A smaller parameter of λ>0 leads to fatter tails and in the case where λ=0.5, the method reduces to the Benson-Zangari method. This method employs a similar approach as the Benson-Zangari method and inherits all the beneficial properties, including the preserving of the risk factor standard deviation, correlations between the risk factors, and the ability to generate an arbitrary number of scenarios.

Figure 1 illustrates the difference in the return distribution between the HVaR, Benson-Zangari, and fat-tailed methods. The returns are changes in effective yield of the ICE Bank of America U.S. High Yield Index[2] based on 500 daily historical returns ending on March 18, 2014. The Benson-Zangari and the fat-tailed methods used 10,000 scenarios. Note that for a long corporate bond portfolio, the drawdown in the portfolio occurs when the effective yield rises; hence, the focus for VaR should be on the right tail of the return distribution.

Figure 1: The difference in return distribution for the HVaR, Benson-Zangari, and fat-tailed methods in Monte Carlo and log sampling.

The Monte Carlo sampling (non-logarithmic) plot illustrates the leptokurtic nature of the empirical (historical) return distribution, in stark difference to the normally distributed Benson-Zangari method. The log sampling plot reveals the weakness of the Benson-Zangari method at the right tail where the projection of the historical returns has essentially eliminated scenarios with returns that exceed 0.2%. The log sampling plot also reveals the "noise" present in the right tail for the HVaR. The low sampling count of historical returns generally leads to more noise¬—especially in the tails where occurrences are sparse—making VaR estimations inherently more challenging when using historical return distributions. The fat-tailed method not only captures more extreme values than the Benson-Zangari method but does so with a smoother tail than HVaR. In this example, the VaR-99 values for the HVaR, Benson-Zangari, and fat-tailed methods are 0.20%, 0.13%, and 0.19%, respectively.

What Do the VaR Metrics Tell Us About the Recent Events?

We considered the same ICE Bank of America U.S. High Yield Index effective yield over a 10-year span from April 9, 2012, through April 7, 2022, totaling 2608 daily changes. On each date t, the three methods were calibrated using the most recent 500 daily historical change to estimate the VaR-99. Then, the estimated VaR-99 values were compared to the actual daily change from t to t+1.

In Figure 2, we deliberately display the daily change (left axis) and the effective yield (right axis) in reverse order since portfolios that are long bonds behave inversely to changes to the effective yield. We consider estimating the VaR of the right tail of the change distribution for the same reason. A right tail breach occurs when a daily return (shown by red dots) appears below a VaR lower bound. 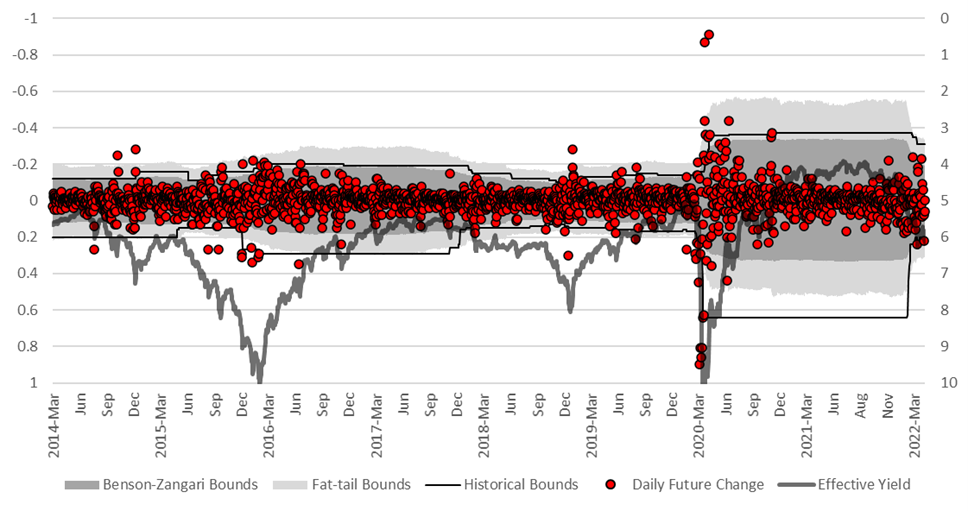 In total, there were 2108 daily evaluation of VaR-99[3], therefore, a risk manager would expect approximately 21 (≈2108×0.01) left-tail (drawdown) breaches to occur during this period. In Table 1, we see that the fat-tailed method had the lowest breach count and, more importantly, had the most accurate estimation of VaR-99 over the 10-year period. The fat-tailed method was also able to achieve this with a lower VaR-99 than the HVaR method.

Table 1. Number of right-tail breaches for the three VaR methods.

Qualitatively, there were sporadic breaches of the VaR-99 levels in 2015 (oil price crash, Greek debt default, Shanghai stock market crash) and 2018 (U.S.-China trade war, U.S. Federal Reserve interest rate increase), but they were relatively minor in comparison to the COVID-19 shock in March 2020. The latter effectively determined the VaR over the historical window length (2 years in this case) after March 2020. In contrast, the recent conflict in Ukraine so far appears to be less extreme, at least from a VaR perspective. Since May 2020, there was a single breach to historical and Benson-Zangari VaR-99 on April 5, 2022, when the effective yield jumped by 22 bps the following day, and no breaches for the fat-tailed VaR-99. However, with many uncertainties ahead—geopolitical, monetary (inflation), health-related, and social—assessing portfolio extreme risk accurately will likely be more important than ever.

See our Buy Side Risk solution