US House Speaker Paul Ryan said on 9 May that US legislators would need to receive the final renegotiated North American Free Trade Agreement by 17 May if the President Donald Trump's administration wanted fast-track ratification in 2018.

Canada, Mexico, and the United States have been renegotiating the North American Free Trade Agreement (NAFTA) since August 2017, but only six out of 30 trade-related chapters have officially been agreed. The rules of origin issue, relating specifically to local content demands in the auto industry, is among the most contentious areas of negotiation, together with US-proposed modification to the dispute settlement mechanism and the incorporation of a sunset clause.

Under the current US Trade Promotion Authority, the US Congress would be able to ratify the agreement without amendments, but Congress needs to be notified 90 days prior to the US president signing it and needs to wait until the US International Trade Commission produces an economic impact report "no later than 105 calendar days after the agreement is signed" for Congress to be able to discuss the renegotiated deal. Under such circumstances and with US mid-term elections taking place in November, the possibility of ratification under the current Republican-dominated Congress would be in the December 2018 lame-duck period prior to the start of the new Congress in 2019, which might have a different balance of power. 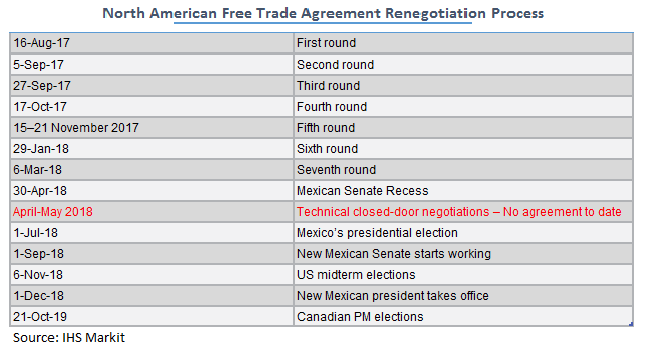 Even if the current differences on rules of origin are resolved (media said on 10 May that the US had rejected Mexico's latest counterproposal - 70% local content - on this subject) agreement looks unlikely to be reached by 17 May unless the US decides to cede on its demands relating to the modification of the dispute settlement mechanism (the Mexican government is unlikely to accept to resolve trade-related disputes in US courts rather than through an arbitration process) to ensure ratification with a Republican-dominated Congress.

In the case of Mexico, ratification of a renegotiated NAFTA would only be needed in the Senate, which is currently in recess. With a Mexican presidential election scheduled for 1 July, incumbent President Enrique Peña Nieto will likely struggle to successfully arrange an extraordinary session amid the ongoing political campaign. Therefore, the current Mexican administration will have two options to ratify the agreement before a new president takes over on 1 December. The first one would imply calling for an extraordinary period of sessions in August, under the current balance of power in the Senate where the ruling Institutional Revolutionary Party (Partido Revolucionario Institucional: PRI) and its allies have a 48% representation. Peña Nieto's second option would entail attempting to ratify the renegotiated deal with a new Senate, where the balance of power will shift as its members will also be elected on 1 July, but that starts legislating on 1 September.

In any of these scenarios, the position of the next Mexican president to be elected will be crucial to ensure the treaty's ratification. Front-running presidential candidate Andrés Manuel Lopez Obrador of the National Regeneration Movement (Movimiento Regeneración Nacional: MORENA) has supported the continuation of NAFTA in the past but warned against a rushed-renegotiation and will likely want to carefully study any final deal. However, Ricardo Anaya, second in the polls and belonging to the Citizen Front for Mexico (Frente Ciudadano por México: FCM) coalition, is more likely to support the ratification of any agreement.

In the case of Canada, the ratification process is very straightforward, and there is strong political consensus in support of NAFTA. Ratification takes place at the cabinet level, which is assured, as is the House's passage of any necessary implementation legislation at the federal level. Although provincial legislatures are responsible for the introduction of any necessary implementation legislation in areas under their jurisdiction, it is highly likely that the provinces would quickly pass the required legislation. Canadian legislators are likely to be flexible with their timeline for ratification, with the federal and provincial legislatures likely to be recalled to pass any required legislation if necessary to ensure the agreement's successful conclusion.

Agreement between the three countries by 15 May would be the most beneficial scenario for the economic and trade stability of the three countries, but particularly to Mexico as its dependency on the US (the market for 80% of its exports) is large and an agreement would remove the economic uncertainty (which has weakened the Mexican peso on several occasions over the past year) generated by the withdrawal threats made by the US. The worst-case scenario for Mexico would be a termination of the agreement. We expect the Mexican economy to grow 1.9% in 2018 and 2% in 2019 but under such worst-case scenario Mexican real GDP growth would be reduced by 0.9 percentage point in 2018 and 2.3 percentage points in 2019. Consequently, Mexico would enter recession. In the first two years after the end of NAFTA the Mexican economy would lose 1.2 million jobs while inflation would surpass 6% and the unemployment rate would increase to 7%.