Latest PMI™ data revealed another sharp deterioration in the health of Myanmar's manufacturing sector at the end of the second quarter, as firms continue to face factory closures and weak client demand, five months on from the military-staged coup. Reflective of the severe worsening of business conditions, sentiment remained among the lowest in the series history in June, with many companies concerned that the adverse economic effects of the coup will reverberate in the coming months.

The decreasing value of the kyat against the US dollar has meanwhile led to intense price pressures, exacerbating rising global prices for many traded commodities and adding to concerns over mounting poverty levels.

The aftermath of the military-staged coup has adversely affected the sector since February. Disruption, including factory and business closures, was especially severe in cities, including Yangon, a key manufacturing region of Myanmar.

As a result, the first quarter of 2021 yielded an average PMI figure of just 34.3, down sharply from an already weak 39.5 in the fourth quarter of 2020, and indicative of the worst performing quarter since the series began in December 2015. Second quarter data have continued to highlight the sombre picture. Although the rates of decline have eased somewhat across key indices (output, new orders an employment) in recent months, they were still among the sharpest in the series' history, suggesting the sector remains in the thick of a downturn. The headline PMI registered just 41.5 in June, running well below the 'no-change' level of 50.0, with the average across the second quarter as a whole (38.1) the second-lowest on record. 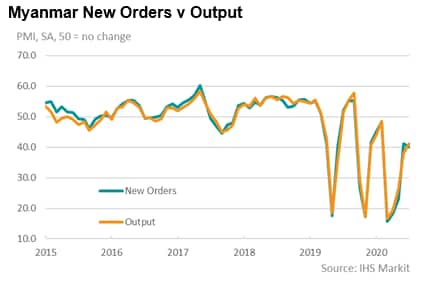 The COVID-19 pandemic hit Myanmar's manufacturing sector hard at the start of 2020, as virus-related restrictions (enforced from April 2020) led to factory closures and weak client demand. Production was again heavily impacted during the second wave of cases in October, with output falling at - what was - a series record pace. March 2021 data, however, revealed further damage to the manufacturing industry dealt by the military-staged coup, with the respective rate of decline in production a fresh survey record.

However, the longer-term implications of the coup are an area of particular concern. Recent developments have seen key retailers pause operations in protest of the coup, while delays in the receipt of inputs and difficulties sourcing skilled labour, common issues globally in recent months, were also linked to further suspensions of manufacturing production across Myanmar. Suppliers' delivery times lengthened at a near-record pace and employment fell markedly in the second quarter.

Should the situation persist, a concern is that firms may look to set-up business elsewhere, posing a damaging longer-term impact to foreign direct investment (FDI) and employment in Myanmar. 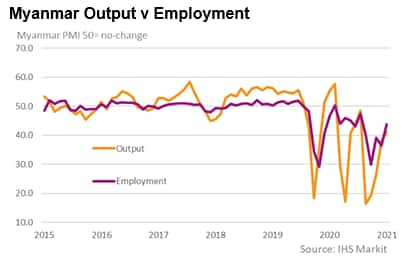 Further exacerbating issues for firms are soaring rates of inflation. May data revealed the sharpest rise in input prices facing Myanmar's manufacturers since the series began over five years ago. Rising global prices were pushed even higher for firms as the Burmese kyat weakened considerably against the US dollar. Manufacturers often faced highly inflated prices for fuel, raw materials, and transportation, as highlighted by anecdotal evidence in the latest release.

Sustained increases in cost burdens often gave firms no choice but to pass on rising expenses to customers. As a result, output prices in May rose at the fastest pace in the series' history, with the rate of inflation surpassing the previous record seen in September 2018 by a wide margin. While June data revealed a slight moderation in rates of inflation, the latest rises in both costs and output charges were still amongst the quickest on record. 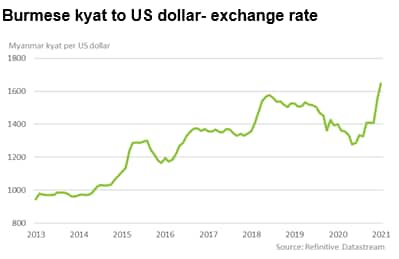 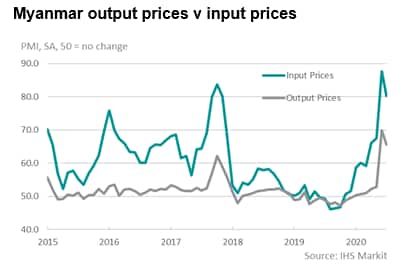 Transaction limits and cash shortages also made it difficult for firms to purchase goods, according to survey respondents, suggesting that price pressures and deteriorating availability are now impacting manufacturing productivity.

Half of Myanmar's population at risk of falling into poverty

The latest drop in manufacturing employment, signalled by the June PMI survey, was the sixteenth in the past 17 months. Surveyed companies highlighted that business closures and the return of employees to their hometowns led to a lack of skilled workers in factory-populated cities. This, paired with higher prices and cash shortages, resulted in a recent United Nations Development Programme (UNDP) release finding poverty levels are likely to increase. In fact, around half of Myanmar's population is expected to live in poverty by 2022, reversing the significant progress policy makers have made since the start of the democratic campaign in 2010.

Manufacturing output data for PMI's across the globe in Q2 highlights the true extent of damage to Myanmar's manufacturing economy. Across the 44 countries monitored by the PMI, Myanmar saw the quickest decline in output over the second quarter of 2021.

This was a stark contrast to the picture for Asia as a whole, which saw a continued expansion of production volumes, albeit one that was much slower than the rapid rates of growth registered for the Eurozone, US and UK. Malaysia, the Philippines, Thailand and Vietnam did all see contractions during the second quarter, but the rates of decline were much softer than those seen in Myanmar. 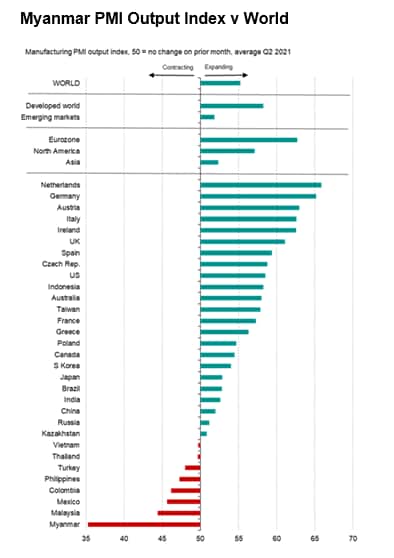 The PMI's Future Output Index signalled historically weak expectations for production over the next 12 months in June. Sentiment picked up slightly from May's record low, but the latest index figure remained well below the series average. Panellists commented on uncertainty surrounding the duration of political disruption, but also noted that steep increases in input prices have adversely impacted production expectations over the coming months. 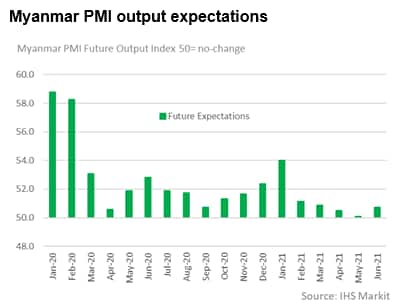 IHS Markit forecasts a 10% decline in GDP in 2021, followed by only a marginal expansion in 2022. Firms will hope the political situation stabilises in the near-term, and that key investors retain their operations to allow factory and hiring activity to resume. Policies to help the situation surrounding the currency and trade could also help relieve some pressures. In other areas, COVID-19 has been overshadowed by the latest political developments, but very much remains a threat to Myanmar's economy.

The next release of the Myanmar Manufacturing PMI will be Monday 2nd August 2021, and will provide the first update on manufacturing business conditions for July. 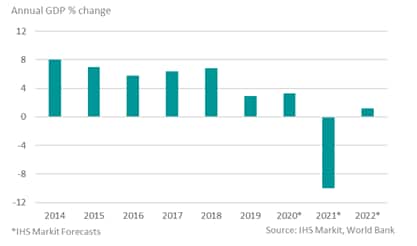