Mukuyu-1: A game-changer for Zimbabwe?

The Mukuyu-1 new-field wildcat will target Upper Karoo sandstones in a 4-way faulted anticline present in license area SG 4571 of the Rufunsa Basin. The structure potentially contains multiple stacked reservoirs with the primary target consisting of fluvial sandstones of the Triassic Angwa Formation.

Added upside potential exists in the overlying fluvial and alluvial sandstones of the Pebbly Arkose and Forest formations, and the post-Karoo Dande Formation. Mukuyu-1 will be the first well drilled in the Rufunsa Basin and with success, will become a play opener, having proved a working petroleum system in the Zambezi Valley.

Invictus Energy Limited will start drilling the Mukuyu-1 well towards the end of August / beginning of September with the Exalo Rig 202. The rig has arrived at the well site and preparations are underway. Invictus Energy Ltd plans to test seven major targets using a deviated well, providing multiple opportunities to make a material hydrocarbon discovery in the 2,700 m well.

Exploration success should facilitate fast-track development options for early monetisation ahead of full field development and pipeline infrastructure. For the low field estimate cases at 1,000 Bscf (billion standard cubic feet) and below, it was assumed that products would be consumed locally via a 260 km pipeline. Sable Chemicals and Invictus Energy Limited signed a memorandum of understanding (MOU) in May 2017, in which Invictus would supply up to 70 million cubic feet of gas per day to Sable's Kwekwe fertiliser plant for 20 years from the Mukuyu project. An additional MOU was signed with Tatanga Energy for the development of a 500 MW Gas to Power project for gas supplied at 100 million cubic feet of gas per day, showing that the local market offtake agreements are in place, should Mukuyu-1 find success. For the higher recoverable volume cases, it was assumed that an 800 km pipeline would be constructed that ties into the Rompco pipeline in Mozambique. Additional local downstream users include Small Scale LNG modular units where LNG can be used in heavy transport section or power generation. Similarly, Compressed Natural Gas is seen as an option for the transport sector as well as small-scale Gas to Power development. In Figure 1, the shaded area to the right of the plot shows where the downstream market is yet to be developed. 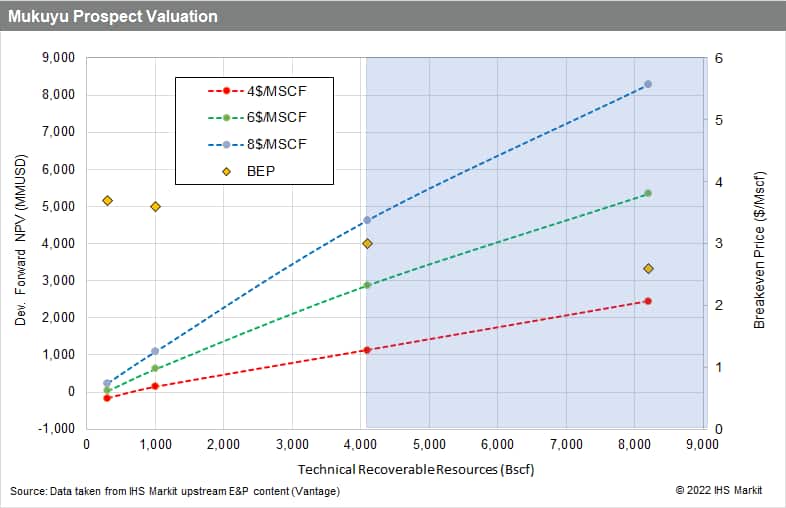 At a gas price estimate of USD 4/Mscf (thousand standard cubic feet), the minimum economic field size is estimated to be around 750 Bscf recoverable, while a discovery in the region of 12.3 trillion cubic feet is expected to have a Net Present Value (NPV) of around USD 3.6 billion. With gas prices expected to remain above USD 6/Mscf for the foreseeable future, a discovery of 8.2 trillion cubic feet is expected to have an NPV above USD 5.3 billion, expected payback within 10 years and an IRR of 17.7%. Invictus Energy Limited has recently reported that the targeted prospects could hold in excess of 20 Tcf (trillion cubic feet). For the purpose of this this exercise, recoverable volumes were limited to 12.3 Tcf, and any additional discovered volumes would be commercial. The breakeven price (BEP) for a discovery of between 4.1 to 12.3 Tcf remains below USD 3/Mscf but the BEP stabilises above 8.2 Tcf. This is attributed to the fact that the extended pipeline costs are included in the CAPEX from a 4.1 Tcf discovery and higher, but the only additional cost would be drilling of more wells, not additional infrastructure. For a discovery below 4 Tcf, the BEP increases more drastically closer to USD 4/Mscf.

Should the Mukuyu-1 findings be a success, the robust positive economics and favourable fiscal terms point to an onshore project that could potentially change the economic landscape for Zimbabwe and potentially stabilise the energy and electricity supply for the Southern African region.