MPD-capable drillships: a sought-after subset in a heating market

The global drillship market, which is dominated by ultra-deepwater (UDW) units capable of working in greater than 2,286 m (7,500 ft) of water, is one of two hot spots in the world rig market, along with the Middle East jackup sector. The chart below shows global contracted drillship demand since 2017 by market category, along with marketed and total supply, the price of Brent crude, and marketed utilisation.

Despite recent fixtures now approaching day rates of USD 400,000 and bidding above this benchmark, the actual level of contracted drillship demand has remained fairly steady over the past five years, aside from a coronavirus disease 2019 (COVID-19) induced decline in 2020. The number of contracted drillships in June 2022 is 70, while in January 2017 it was 68. So, if the level of demand has not changed a huge amount, what has?

The chart shows the main reason for rising utilisation and a tightening market is the reduction in supply. Over the past five years, total supply has fallen from 119 units in early 2017 to 95 in June 2022. Marketed supply fell from 96 units to 80 at present. So far, contractors have been restrained in reactivating cold-stacked drillships, leading to an increase in contracted utilisation as demand recovered post-pandemic. Across the entire drillship fleet, contracted marketed utilisation is now nearly 90%, and peaked at nearly 91% in December 2021.

Strong demand in the US Gulf, West Africa, and South America in particular will see the number of working drillships grow through 2022 and 2023. Based on the most recent forecast, drillship demand could reach up to 85 units by late 2023 from a marketed supply of 90, giving a marketed utilisation rate of 94%. At these levels, the pendulum of bargaining power has swung decisively towards contractors that will be able to secure longer contracts, higher rates, improved bonuses, and more favourable terms and conditions.

However, if we dive deeper into the drillship market, there is a subsection where conditions are even rosier for contractors. Of the 31 drillships that have been retired from the global market since early 2017, 19 were over 16 years old at the time of removal. Transocean alone was responsible for the retirement of 9 of these 31 rigs. The result is a much leaner, more modern drillship fleet. Of the 95 units in the total drillship fleet, 87 are classed as sixth or seventh generation. Marketed contracted utilisation for the entire drillship fleet is 88.7%. If only sixth- and seventh-generation units are included, marketed utilisation improves a bit to 89.2%.

In the last few years, operators' demand for units that can undertake managed pressure drilling (MPD) has increased significantly. This is due to the efficiencies operators believe the process can offer, such as allowing more accurate bottom-hole pressure control, resulting in fewer pressure fluctuations and better control of the well. The process can also enable wells to be drilled while minimising losses and kicks, and possibly avoiding setting additional casing strings. Southeast Asia in particular is, at present, a common area to find requirements for MPD-capable floaters. 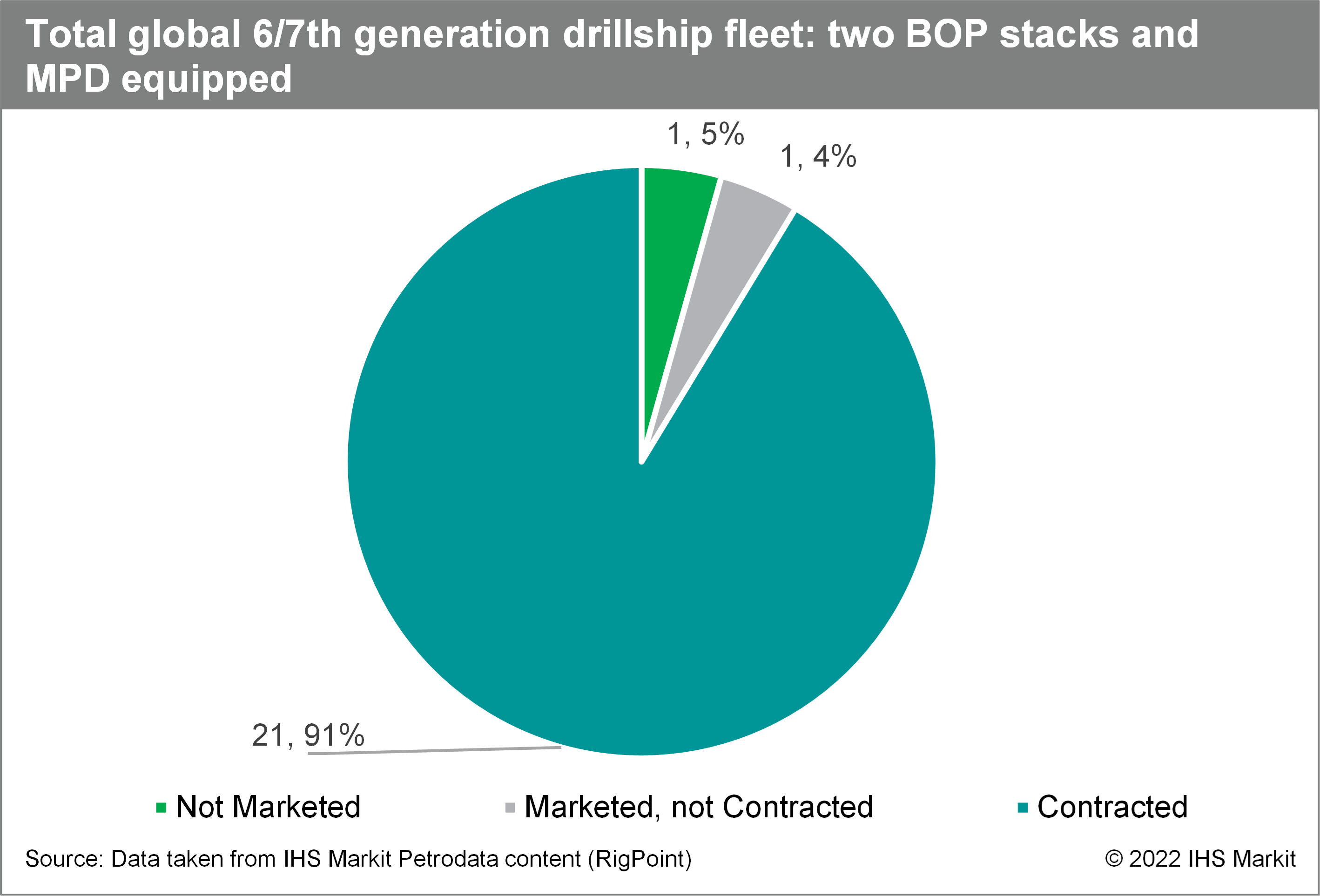 The market for units with two BOP stacks that are MPD-equipped is tight, and as these drillships are the type most sought by operators, there is a clear imperative for contractors to upgrade rigs where they can. But adding rigs to this sector is not straightforward. If a unit is capable of being upgraded to use MPD equipment, the cost is understood to be around USD 30-35 million with two weeks of out-of-service time and a nine-month lead time on equipment. An influx of rigs into this sector will not happen overnight.

In contrast, for the sixth- and seventh-generation drillships that only have single BOP stack and are not MPD equipped, total contracted utilisation is lower at 76%. Marketed utilisation for these units is still high, however, at 89%, with 13 units not marketed for work. The ability of contractors to push rates higher will depend on how quickly they release cold-stacked units back into the marketed fleet. At this time, discipline remains strong with contractors in no hurry to reactivate units if the right term, conditions, and day rates are not achievable. 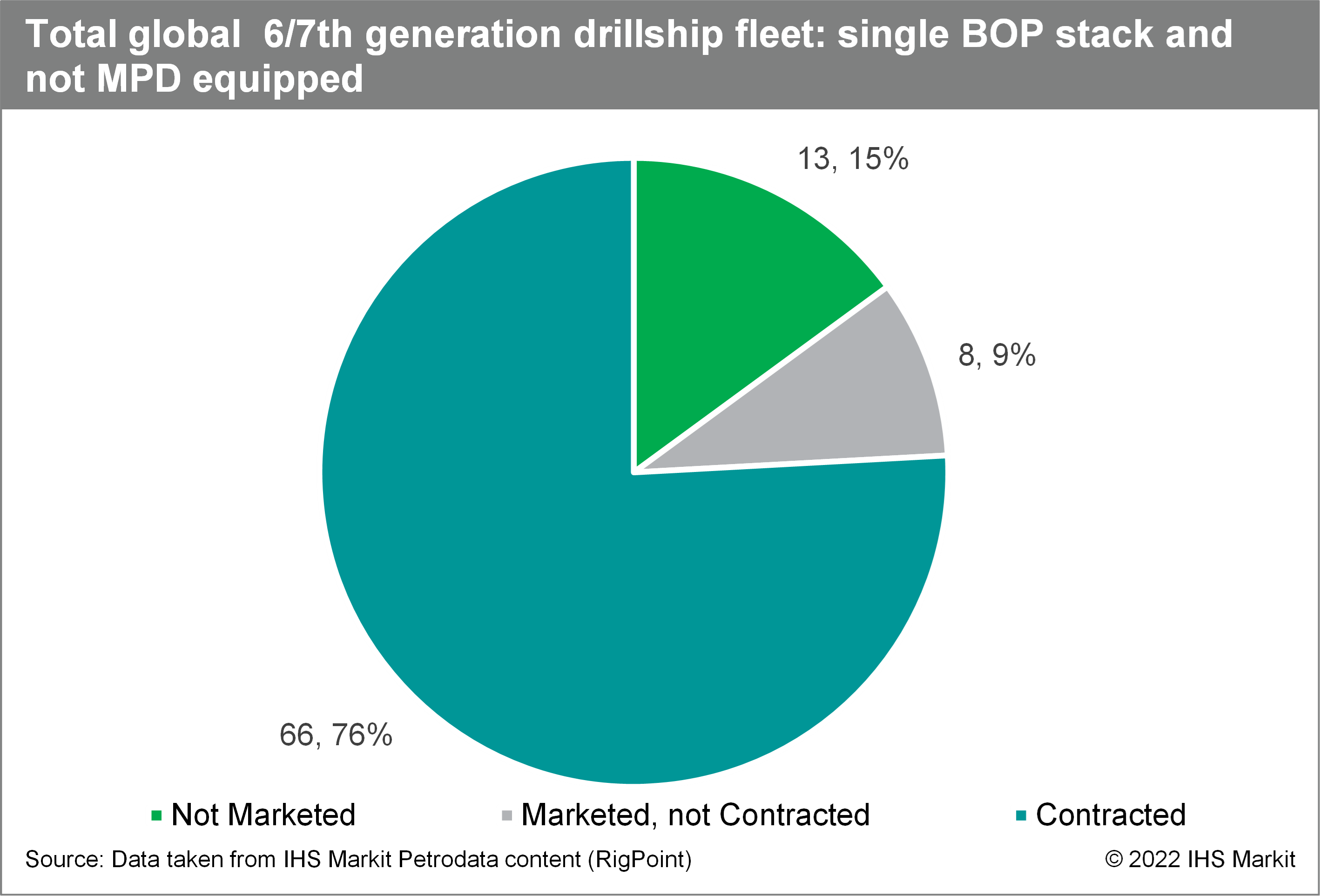 As a result, availability of MPD-capable drillships with two BOP stacks is extremely limited. Petrodata Rigs currently counts 23 drillships as being outfitted in such a way. Apart from one cold-stacked unit only four are potentially available in 2022, all of which are working in the US Gulf. It is understood such is contractors' belief in the prospects for high returns in this market that even units due off contract this year could be stacked if contract terms are not right, and kept off the market until longer-term work starts in 2023.

Demand is increasing for UDW drillships in general, and for units with MPD-capability and two BOP stacks in particular. Contractors are confident that day rates will continue to increase and it will not be long before the USD 400,000 day rate fixture barrier is broken. Drillers look set to capitalise on this growing subset of the UDW market.