The latest challenge to beset the Mountain Valley Pipeline (MVP) project came in March when the Virginia Department of Environmental Quality sought a one-year extension from the US army Corps of Engineers to review the pipeline's application for water-crossing permits. The request led to MVP's in-service date ultimately getting pushed back to the summer of 2022 at the earliest, as opposed to the previously reported in-service date of early 2022.

The added delay was a new blow to the project, possibly dimming the prospect for a new delivery route for Appalachia-produced gas. MVP is jointly owned by Equitrans Midstream, NextEra Energy, Con Edison Transmission, WGL Midstream and RGC Midstream. The pipeline originates in Wetzel County, West Virginia at an interconnect with the Equitrans pipeline system and extends 303 miles south to an interconnect with Transcontinental Pipeline in Pittsylvania County, Virginia.

The 2 Bcf/d greenfield pipeline - designed to move Marcellus and Utica gas to mid- and south-Atlantic markets - is likely the last long-haul pipeline project of its kind as state and local regulatory agencies, along with environmental activists and indigenous community advocates, continue to prove formidable obstacles to new pipeline construction.

The reality of no new interstate pipelines out of the Appalachia region began to crystalize with the official winding down of the Atlantic Coast Pipeline in 2020, resetting the market's view of Northeast gas production potential and its impact on regional prices. 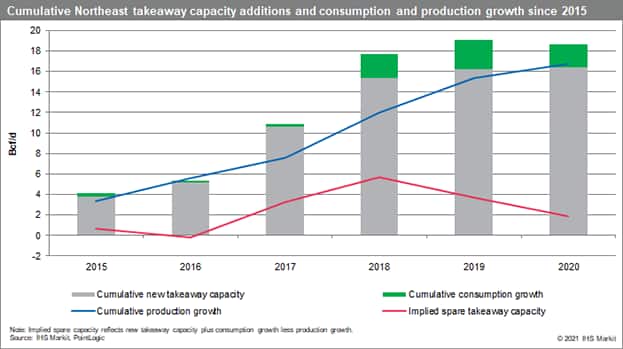 With little available takeaway capacity, local demand and storage become hard constraints on Appalachian production and upstream basis discounts can widen substantially when absorption limits are approached. This occurred in late August 2020 when demand was soft and Dominion Energy Transmission reported storage above 80% of capacity two weeks ahead of the typical schedule. Basis discounts exceeded $1.20/MMBtu.

The additional takeaway capacity that Mountain Valley Pipeline would bring could take the pressure off storage and prices, as well as give a potential boost to producers looking for the resumption of a steadier growth trajectory.

Unfortunately, permitting troubles are not the only headwind facing MVP. The project's capital expenditures have ballooned significantly since MVP applied for its FERC certificate in 2015 due to route amendments, regulatory delays and various other charges. Equitrans in May 2021 updated the cost estimate for the project to $6.2 billion, which compares to a 2015 estimate of $3.7 billion. In addition, NextEra Energy's chairman reported in January 2021 a $1.2 billion write-down on its investments in the pipeline for Q4 2020.

Peter Bowden, global head of energy investment banking at Jefferies, commented on the difficulty of financing new pipelines in markets that are "severely depressed" at IHS Markit's CERAWeek conference in March.

"It has become much more difficult to finance these projects," Bowden said, adding that from 2013 to 2015, average equity issuance per year for midstream was $25 billion, but in the three years through 2020, it averaged just $1 billion yearly.

Chief executives from Enbridge Inc. and Williams Companies at the same conference concurred that new builds were becoming increasingly challenged, emphasizing that brownfield expansions would instead escalate in importance.

One singularly bullish facet of MVP's construction journey is the company's steady reminders that the pipeline is 92% built. As a frame of reference, the Atlantic Coast Pipeline, which followed a roughly similar route to MVP's, was only 6% complete at the time of cancellation in July 2020. In addition, MVP representatives insist that demand for the gas delivered via the pipeline has only increased in the wake of Atlantic Coast Pipeline's cancellation.

Environmental and regulatory challenges may not ultimately stop MVP, but with each new delay the financial difficulties increase and sew heightened volatility into Northeast gas prices. Persisting takeaway constraints are likely to force an era of increased restraint among the region's producers.