Most shorted US equities deliver alpha in October

After a challenging spring and summer for short sellers, which saw the most shorted US equities outperform in each month from March-August excluding July, the return of alpha in the short interest factors in September and October has been most welcome. October delivered the largest relative return for shorting the most shorted stocks since October 2017, which was itself the best return since the October proceeding the 2016 election. 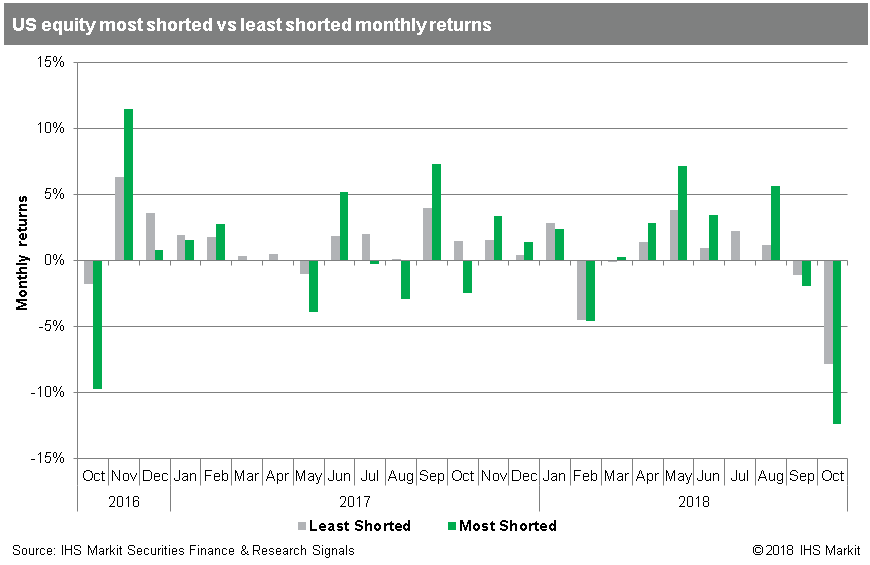 That is exactly when short alpha is most crucial, providing long-short portfolio managers with income and the opportunity to add to long positions in a sell-off. The -12.3% average return for the most shorted stocks is the lowest absolute return since January of 2016, when the most shorted returned -13.8%. Both events in 2016 were followed shortly thereafter by significant pain for short sellers, with February, March and November of 2016 seeing significant outperformance of the most shorted US equities. While we're only two trading days into November, the pattern appears to be repeating, with the most shorted stocks up an average of 4.3% while the least shorted have only returned 1.6%.

Given the harsh snap-back for highly shorted stocks coming out of previous sell-offs, it's not surprising that short sellers didn't add significantly to positions in October. The sell-off reduced the total short balances by ~$55bn, despite an increase, on average, in shares short. The most shorted stocks saw less of an increase in shorting on average, though that likely stems from a combination of reticence toward shorting heavily shorted stocks at the lows combined with challenges in sourcing additional borrows for the more crowded stocks.

While overall short balances were down, there was an uptick in borrow costs, driving a small increase in borrows with a balance greater than 500bps, which had previously been trending down all year. The balances increased from $5.4bn in September to $6.3bn in October, the highest level since July. The weighted average fee for these stocks also increased from 534 to 682bps. The relative underperformance of highly shorted stocks, combined with the increased fees and balances for specials, highlight the dual benefit of securities lending: In a sell-off shareholders have the opportunity to achieve excess lending returns, while short sellers have the opportunity to capture alpha on the short side. 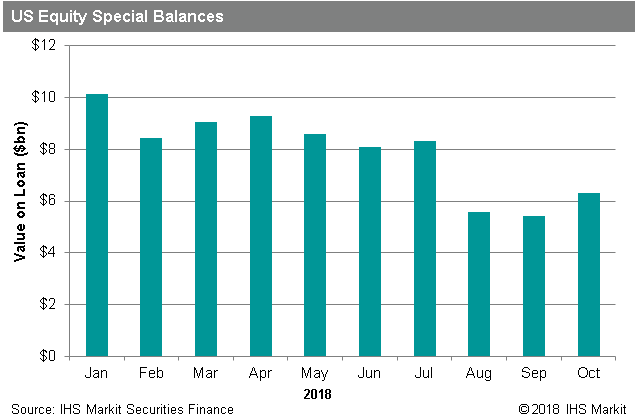 Demand for warm stocks, 100-500bps fee, declined in October, but that came largely as the result of activity in Tesla, where balances declined in the early part of the month and the fee movied below the threshold toward the end of the month.

It has been a solid couple of months for US equity short sellers, after a brutal run this summer, specifically in early June and August. Short sellers did not increase positions by enough to offset the decline in market valuations, however there was a selective addition to some positions amid a volatile earnings season. As we'll discuss in a follow-up note, things have gone a bit better on the short side in Asia, particularly in EM, where the October short interest factor returns were even better than in the US.

How will #cloud adoption, #datawarehousing and other factors influence the buy side in the 2020s? @Glenmede’s CTO,… https://t.co/ld4040gGvz

Wondering where to start with #ESG? Watch @IRMagazine's interview with our own Brian Matt backstage at the 2019 ESG… https://t.co/khb8kDJl4W