Most Shorted Ahead of Earnings: J.C. Penney & Pets at Home Group

Short sellers have increased bets against J.C. Penney by 28m shares terms since February 28th, when the shares reached their YTD high price of $4.33. Given the nearly 33% decrease in share price since the high, the increasing shares have allowed short sellers to maintain a short position of roughly $300m, currently $316m. The change in active positioning since the end of February is in sharp contrast with the first two months of the year when short sellers covered 34m shares, reducing the short balance by $64m. The strong results that Macy's posted on May 16th, which sent the shares up over 10%, may have given short sellers pause in further adding to short positions in JCP. Shorts sellers of Macy's have reduced shares short by 14m, or $286m, since the start of 2018. 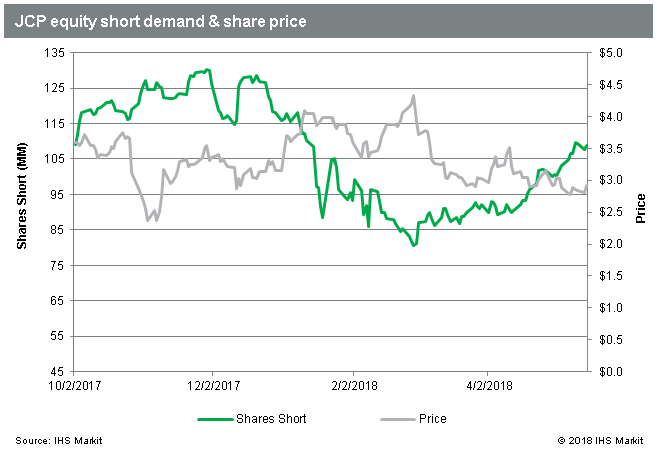 There has also been increasing short demand for the JCP bonds, with the 5.875% 2023 issue seeing short demand increase from under $10m in late February to over $45m currently, during which time the bonds traded down from 97.88 (6.37%) to 94.88 (7.08%). Borrow costs have also trended up with demand, with nearly 90% of the bonds available from the banks already on loan.

Elsewhere in the Retail sector, short sellers have repositioned themselves in UK pet supply retailer Pets at Home Group Plc ahead of their earnings report on May 22nd. The last time the firm reported, on January 22nd, the price jumped 6%, which prompted short sellers to reduce their position by 25% in the subsequent week. Since then the share price is down over 20%, which has led short sellers to slowly come back in during the quarter, with short demand increasing by more than 10m shares. The total short position is still smaller in both share terms and value since the start of 2018. 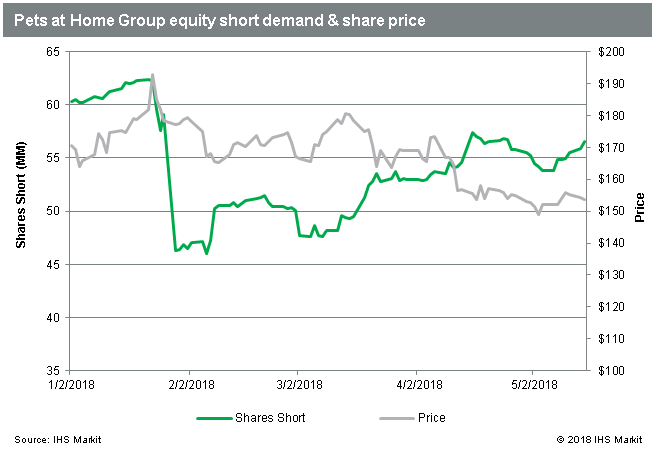