How the European energy crisis has transformed the asset economics

A consistent exploration strategy and the recent developments in European energy strategy have turned Anchois, the first ever gas discovery offshore Morocco, into a great success for Chariot Energy and a major asset for the local and regional energy security. The recently appraised field has been upgraded to more than double the recoverable resources and has more than tripled its value driven by the prevailing and projected gas prices. The field, which is situated in shallow waters and approximately 40 km from the Gazoduc Maghreb Europe (GME) pipeline that used to export Algerian gas to Europe until late 2021, can improve Morocco's energy security and provide some medium-term relief to Europe's gas supply challenge. Operator Chariot Energy is moving ahead with Phase 1 of the project, but current market conditions and robust asset economics could justify an accelerated Phase 2 development as well. The low technical risk, the proximity to shore, the particularly favorable fiscal regime and the low above-ground risk certainly make Anchois one of the most attractive upstream developments in Africa.

With Morocco's energy needs being heavily reliant on imported coal and gas and Algeria's decision to halt gas flows via the GME pipeline, the field may be key for the country's energy security - the government's priority is to find a way to increase domestic energy supply while reducing dependency on energy imports. In the meantime, the GME flow has been reversed with gas flowing from Spain to Morocco to meet the country's gas demand. Moreover, the EU's recent decision to phase out gas imports from Russia and the recent high gas prices, estimated to remain at levels over 20 united states dollars per thousand cubic feet (20 USD/Mscf) until the mid-2020s, have not only improved substantially the economics of the project but can also place Morocco and Anchois in a key position in the European energy market. 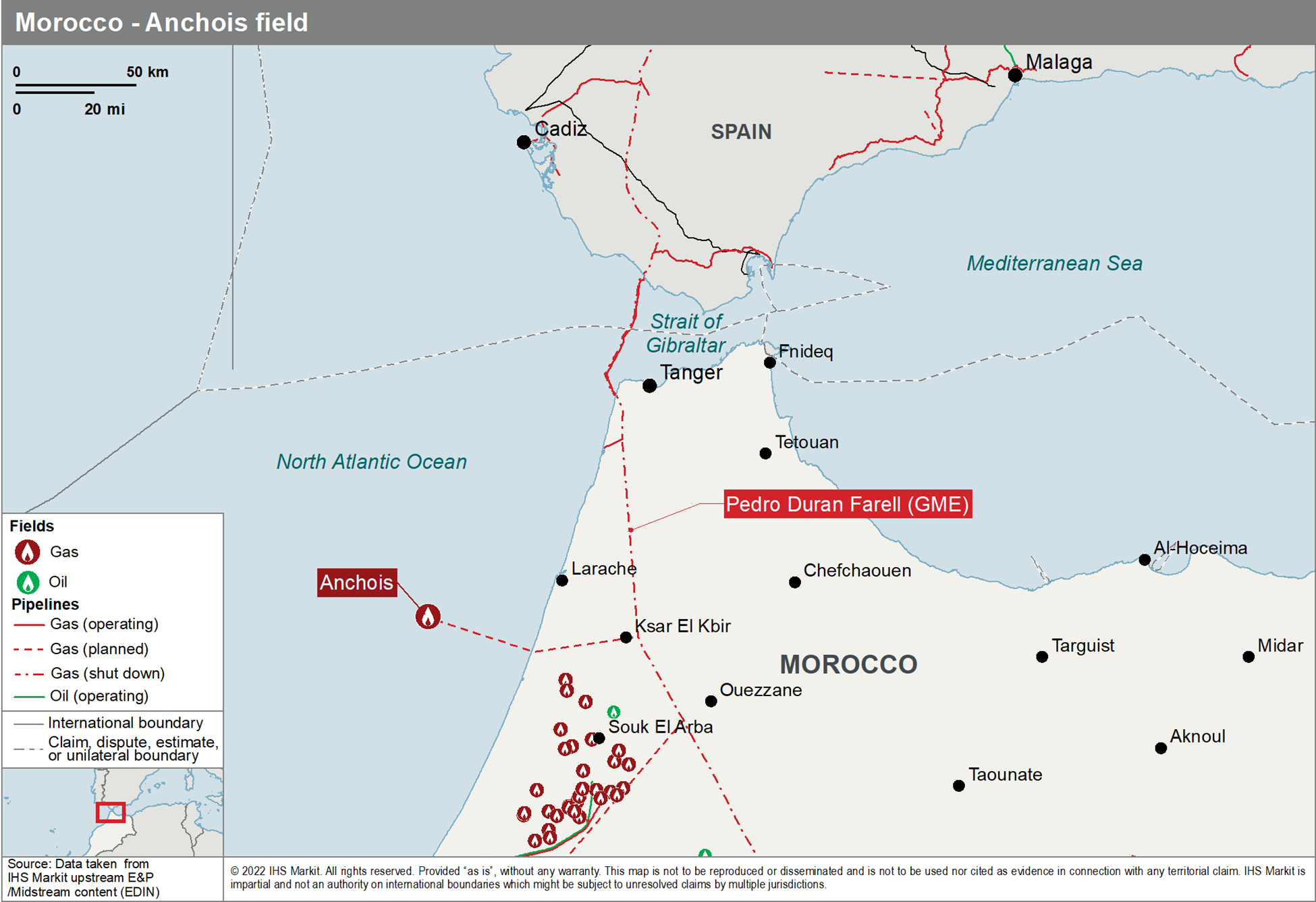 The country's current gas consumption is in the region of 110 million standard cubic feet per day (MMscf/d) while domestic gas production is around 10 MMscf/d. Seventy per cent of the domestic supply comes from the SDX Energy onshore assets. Now, Chariot has the potential to make Anchois the first offshore gas development within Morocco and significantly increase domestic production. 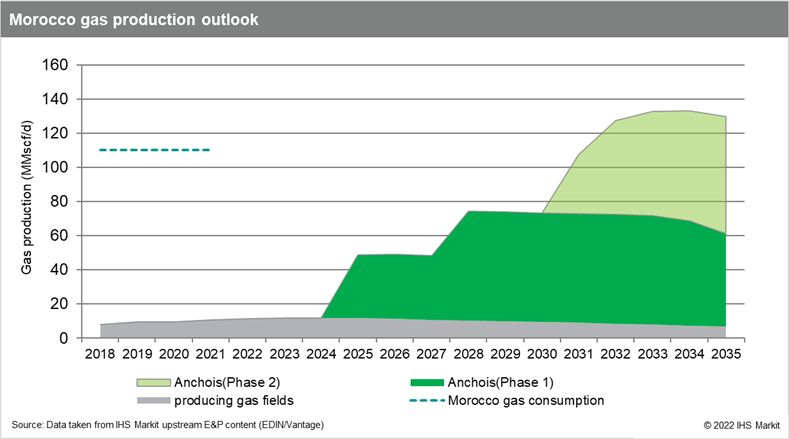 The Anchois gas field was discovered by Repsol in 2009 via the Anchois-1 well, which intersected gas columns in two high-quality Tertiary-aged turbidite reservoirs. The license, however, was later relinquished as a result of the marginal economics. In 2018 the area was licensed again by Chariot as part of the Lixus Offshore block. Since then, a consistent and systematic exploration strategy has resulted in more than a doubling of the initially estimated recoverable gas volumes. The recently drilled Anchois-2 well not only confirmed the gas accumulations within the initially discovered Sand A and B, but also discovered three new reservoirs in deeper sand intervals, namely C, M and O consisting of approximately 150 m of net gas pay within the same reservoir intervals. Additionally, the positive results of the Anchois-2 well have also de-risked multiple exploration prospects with similar seismic qualities in the area that could hold up to 3 trillion cubic feet of gas (Tscf) of gas. In early 2022, Chariot announced that it is planning to expand its exploratory activities in the region with several seismic surveys planned within the Lixus and the nearby Rissana license, including a shallower hub close to Kenitra city.

Chariot has announced that it is currently working on finalizing a field development plan (FDP) aiming to take a final investment decision (FID) within 2022 with first gas targeted for late 2024-early 2025. Based on the announcement, the field will be developed in two phases. Phase 1 consists of three production wells, including the Anchois-1 and Anchois-2 wells which have already been drilled and will be completed as producers, a third producer that will be brought on-stream by 2027, and an onshore processing facility. Initial production is estimated to reach levels equal to 40 MMscf/d with a further ramp-up to 70 MMscf/d three years later. A mid-life onshore compression project will be required to maintain a 70 MMscf/d plateau for 10 years. Gas will be sent to the onshore gas central processing facility (CPF) via a 40km subsea flowline. From there, gas will be sent to the GME pipeline via an onshore pipeline which will have enough capacity to receive additional gas resources from the newly discovered sands. The total CAPEX for Phase 1 is estimated to be in the region of USD 350 million with 15% of the total spent already realized since two out of three wells have already been drilled. The CPF cost is estimated to be in the region of USD 150 million. 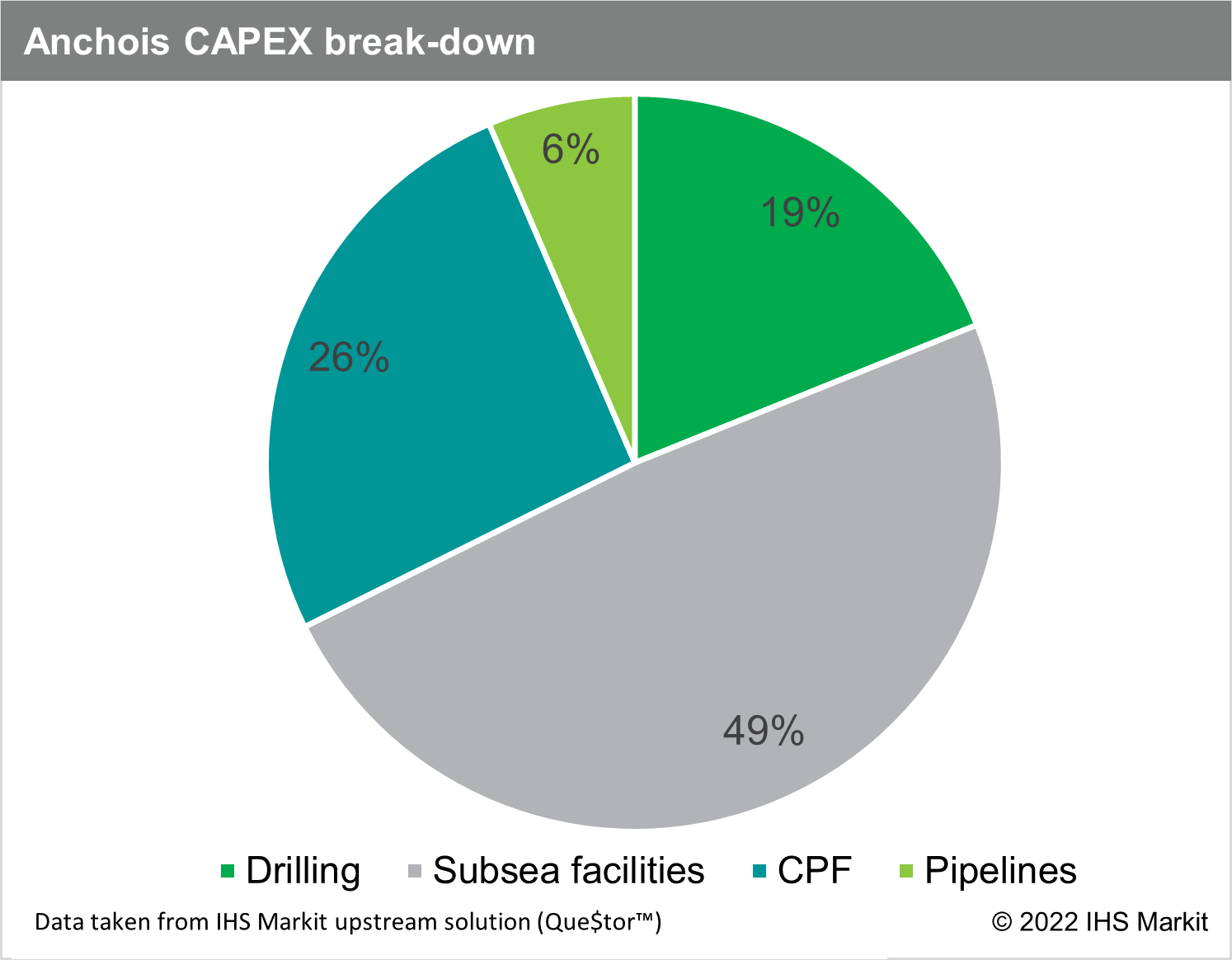 Phase 2 will include the development of the recently discovered C, M and O sands. Four to six additional production wells will be required while the total field plateau rate will be up to 100 MMscf/d in line with market demand. The total development cost for Phase 2 is estimated to be in the region of USD 400 million.

The gas market in Morocco is mainly driven by industrial and power generation demand, which is mainly met by importing renewable energy and fossil fuels. Anchois could help the country displace coal imports and be an alternative to the Algerian gas supply via the GME pipeline, which has been interrupted since October 2021 on the grounds of diplomatic disputes between the two countries. Moreover, the recently announced European strategy to phase out gas imports from Russia could be a turning point for the Anchois full field development, considering the low technical risk and the proximity to the GME pipeline. With a field production capacity announced at over 100 MMscf/d, surplus gas can be exported to Spain and the European market which is in dire need of cheap and reliable gas supply.

To date, Chariot has signed a memorandum of understanding (MOU) with "a leading international energy group." The gas sales key terms of the agreement include 40 MMscf/d sold to the domestic market over a period of up to 20 years on a take or pay principle. Additionally, the MOU covers a partnership option in the field development project.

Based on the IHS Markit Vantage product and using different gas price scenarios, the economics were modelled for both phases of the project. With gas prices in Europe to remain high for the next 5-6 years, and an expected USD 10/Mscf thereafter, the economics of the project have changed substantially over the past 10 months. At the October 2021 gas price forecast the full field development was estimated to deliver a NPV10 of USD 280 million with an internal rate of return (IRR) of 8% and a break-even price of 2.5 USD/Mscf. Following Russia's invasion of Ukraine and the sharp rise in European gas prices, the NPV for the full field development has now increased to around USD 750 million with an IRR in the region of 34% while the Phase 1 NPV is estimated to be in the region of USD 500 million with an IRR of 30%. 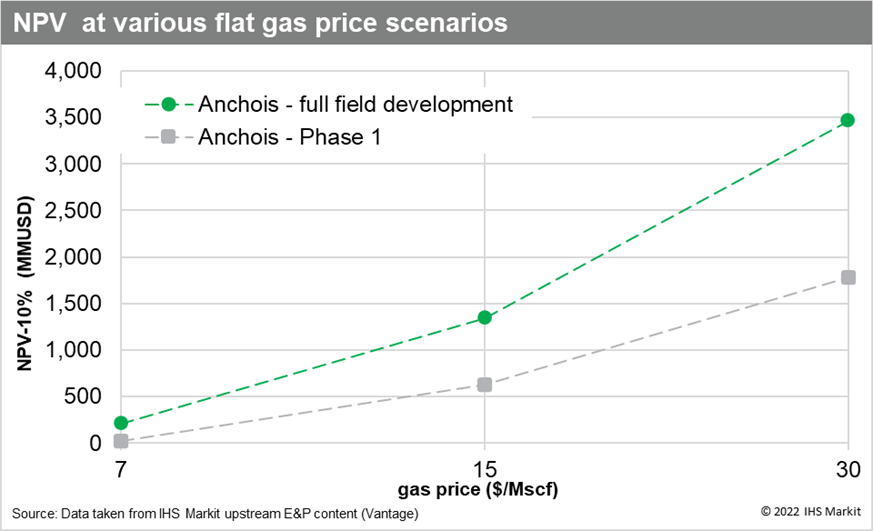 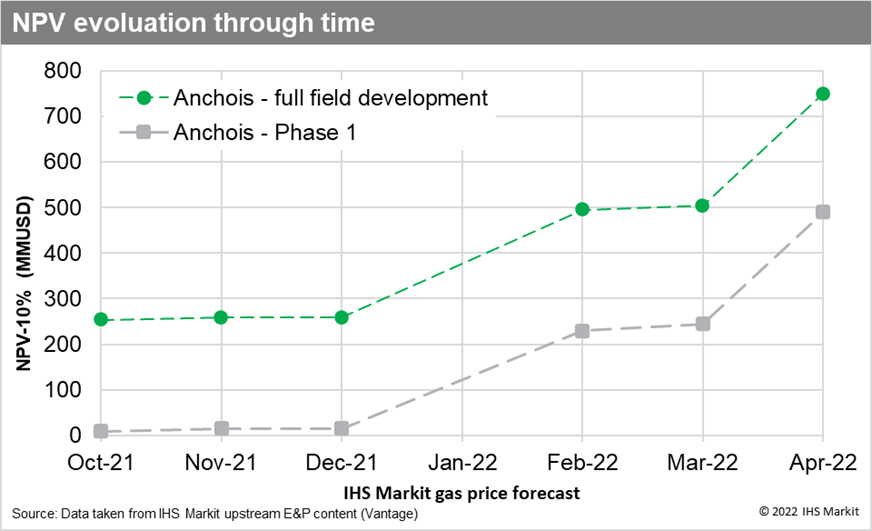 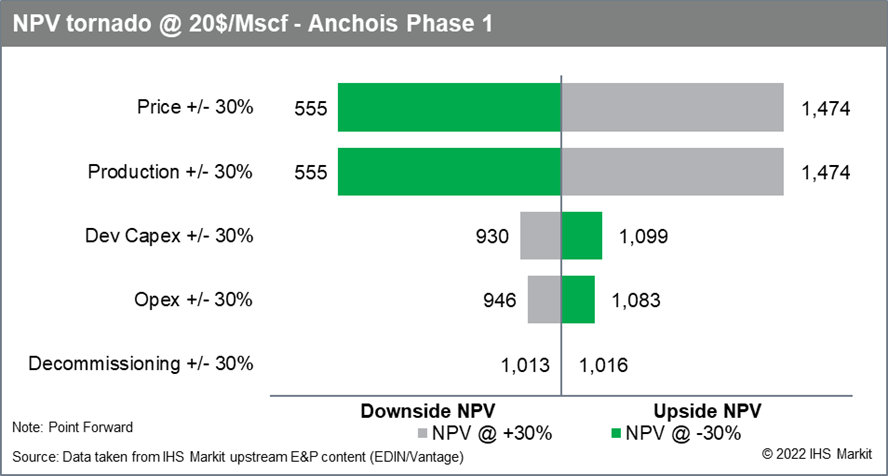 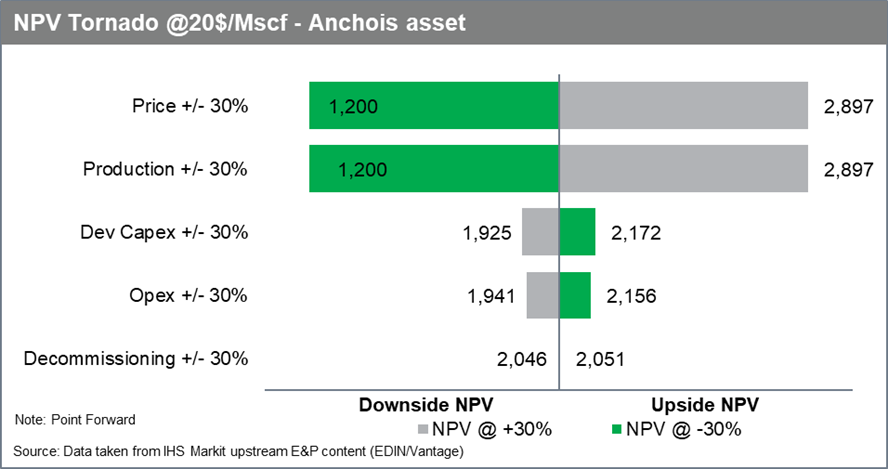 With the project economics being highly dependent on gas prices and the gas production rate, changes in the OPEX and CAPEX values are not likely to impact the project value much, while the expected high gas prices can increase the asset valuation substantially. Gas price sensitivities have indicated that even with a 30% lower gas price the asset maintains its highly attractive economics with a NPV in the region of USD 700 million, while with a gas price in the region of 26 USD/Mscf the asset NPV increases to just below USD 2 billion.

Considering the various commercialization options and the favorable fiscal environment that includes a 10-year tax holiday and a low 3.5% royalty on offshore gas projects, Chariot has the potential to boost Morocco's gas production, meet domestic demand and potentially address some of Europe's gas supply challenges.